Malware Rates in Thailand: Why You are at Risk. - The Tech Revolutionist

Malware Rates in Thailand: Why You are at Risk.

Home » Malware Rates in Thailand: Why You are at Risk. 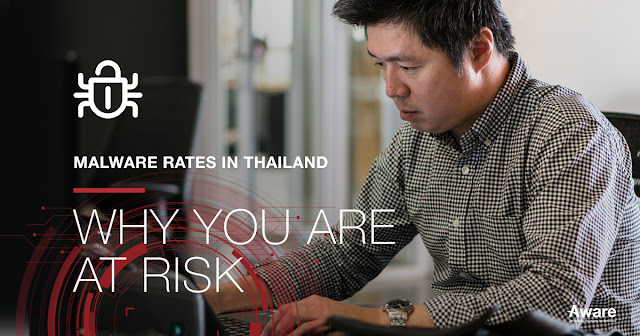 Malware Rates in
Thailand: Why You are at Risk.
Sean Allan, Digital Marketing Manager, Aware
Every year for the
past two decades’ incidents of cybercrime have increased year-on-year
worldwide. Recent studies expect this trend to continue, with cyber security
costs set to double to $6 trillion by 2021. While most internet users are
actually in Asia, virtually all research has been conducted on data collected
exclusively from English-speaking countries.
Although Thailand is
one of the fastest growing regions in the world in terms of internet usage;
education on the pitfalls, prevention, protocols as well as out-date
technologies leads to an increased risk of malware infection.
These issues leave
Thailand among the top 25 malware-infected nations globally, per Microsoft
Digital Crimes Unit. With around 30% of the internet using population in
Thailand encountering malware, and an infection rate of 25%, over 5 million IP
addresses are connected to malware infected devices.

A 2016 study BitDefender ranking SEA countries by exposure to
ransomware, found Thailand to be in 5th place in Asia and 11th place globally.
Thailand’s ranking was surpassed by a further four other countries in Asia –
India, Indonesia, China and Vietnam.
Thailand also
consistently ranks in the top ten countries for hosting phishing-based Trojans
and downloaders and in the top 20 of countries where there is the greatest risk
of infection (33%).
Why Thailand is at
Risk
Lax security
protocol in Thailand has not gone unnoticed by cyber-criminals. In 2015
Thailand became the world’s number 2 target for cybercrime, according to Allianz Global. Nearly 20% of Thailand’s cybercrime
victims reported losses of over $100,000 USD and 4% reported losses of between
$1 million and $100 million. 39% of SET-listed companies were victims of fraud
in 2016, mostly perpetrated by external hackers and rogue employees.
Thailand’s internet
usage is exploding, growing rapidly from 3.7% in 2000 to 30% in 2013 – recent
studies indicate that it is now in excess of 60% and with 4G expansion this
looks set to continue. As Thailand becomes more connected, organizations and
individuals are going to become increasingly vulnerable to exploitation by
cyber criminals looking to steal financial and confidential data. 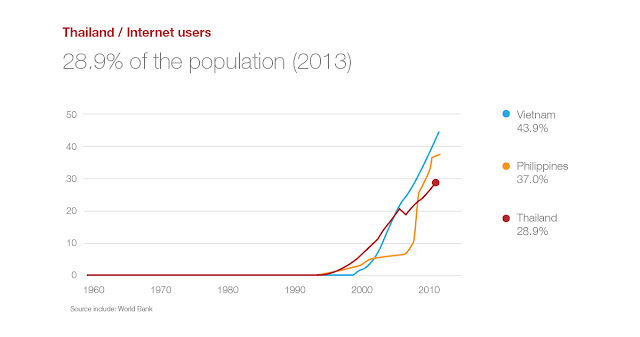 Mobile proliferation
is at 110% in Thailand with more phones than people. Malware that targets
Android-based phones is expected to be on the rise with malware able to exploit
vulnerabilities that plague android devices. Large corporate investment has
laid the groundwork for online expansion in the region. This will lead to
problems on eCommerce platforms which require mobile customers to increase and
trust paying on eCommerce platforms.

Other problems link
back to the high usage of counterfeit software in the region leaving
individuals and businesses vulnerable to attack. For every ten
computers in Thailand, eight are running counterfeit software of some variety
according to Microsoft South East Asia. Furthermore, they studied software
installed in Thailand, Indonesia, Malaysia, Philippines and Vietnam and found
that 84% of hard drives tested in Thailand were infected with malicious
software compared to 69% across the region.
All this malware
comes as a price, The National University of Singapore found
Asia-Pacific consumers would have lost $229 Billion because of infected pirated
software and lost data. This expense accounted for about 45% of the global
aggregate of 2014. Companies wasted 1.2 billion hours and $25 billion in spend
dealing with issues arising from counterfeit programs.
Malware Rates in
Thailand
Studies by Microsoft
in the region indicated that 35% of computers in Thailand encountered malware
of some variety over the second quarter of 2016 compared to a worldwide
encounter rate of 21%. Infection rates are also high with Microsoft’s Malicious
software tool removing malware from 25.3 from every 1000 unique computers
scanned in Thailand compared to 16.9% worldwide. These figures only account for
computers that are connected to Microsoft’s Malware removal tool, these users
are tech savvy and risk averse. 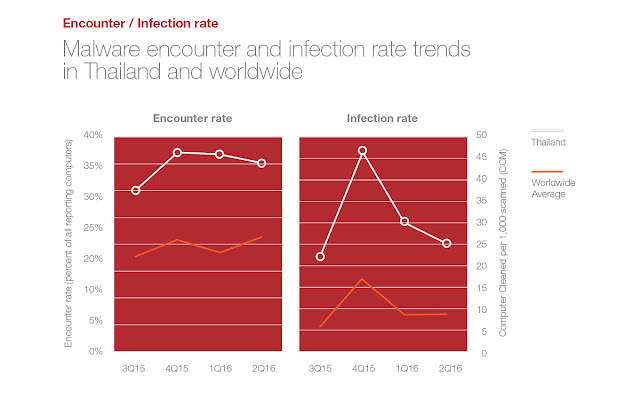 Data from Microsoft
Security Intelligence Report 2016
The most prevalent
malicious software found on computers were Trojans, found on nearly 25% of
infected computers. The second most common virus was worms, which were encountered
more than 7.1% percent of all computers.
download.microsoft.com/…/Microsoft_Security_Intelligence_Report_Volume_21_Re…
Cached
Lodback, which was
encountered in 3.3% of reported computers is usually installed on removable
drives and tries to install the malware when the removable drive is connected
to new computers. 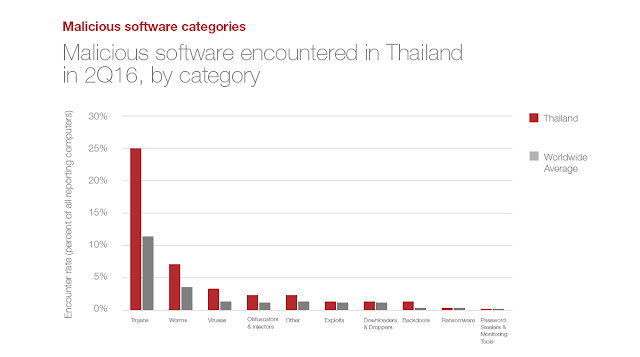 Gamarue was
particularly prevalent in South East Asia and is the third more prevalent
malware worldwide. Variants are usually distributed through exploit kits and
social engineering.
ATM Malware: On
August 1st to August 8th 2016, hackers attacked more than 21 ATMs belonging to
the Thailand Government Savings Bank (GSB) and stole more than 12 million baht.
Representatives of the bank cautioned that all attacked ATMs were made by NCR, and
the attackers are likely to have used a bug or malware that compromised ATMs of
the company.
Jasmine Begum,
Director, Corporate External & Legal Affairs (CELA), Microsoft Malaysia
said, “With increasing malware encounters and sophistication of cyberattacks,
cybersecurity is becoming a mission critical priority for most organizations.
It generally takes an average up to 200 days for organizations to find out that
they have been breached. With no sign of abatement in the future, what
companies need is a Secure Modern Enterprise posture, which involves
well-integrated “Protect-Detect-Respond” investments and capabilities, with a
strategic focus on the core pillars – Identity, Apps, Data, Infrastructure
and Devices.
Additionally,
organizations should also strongly consider adopting trusted cloud-based
services  to enjoy the highest levels of data protection,  leveraging
the cloud provider’s enterprise-grade security and privacy expertise,
assurances and certifications.”
Beside ATM hacks,
Thai consumers are exposed to greater cyber security risks while using mobile
and internet banking service or doing e-commerce transactions online. The
latest numbers indicate that Thailand has approached nearly 30 million internet
bank accounts nationwide.
There is no
sure-fire way to avoid malware on the internet as it’s so pervasive one can be
infected by browsing the wrong sites or opening an email attachment. The best
only way to combat ransomware is through the implementation of protocol that is
adhered too and by educating yourself, or your employees about the risks.
If you would like to
speak about to experts in Thailand about how to tackle malware you can email
Aware: info@aware.co.th
Written by Sean
Allan, Digital Marketing Manager, https://www.aware.co.th