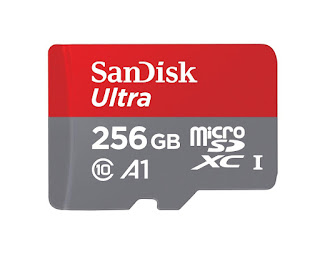 SINGAPORE, 8 March 2017 – Western Digital Corporation (NASDAQ:
WDC), a global storage technology and solutions leader, today unveiled the
world’s first microSDTM card that meets the Application
Performance Class 1 (A1) requirements from the latest SD Association’s SD 5.1
specifications. By meeting the A1 performance standard, the 256GB SanDisk Ultra® microSDXCTM UHS-I card, Premium Edition, delivers
capacity, speed and enhanced capability to deliver a better smartphone
experience1.
Since the popular memory card format launched
more than a decade ago, microSD cards have been instrumental in driving new
segments in digital imaging like action cameras, drones, dashboard cameras and
surveillance systems, and have significantly impacted the evolution of the
smartphone. Today, approximately 75 percent of smartphone models on the market
contain microSD slots, according to data from Strategy Analytics2.
The 256GB* SanDisk Ultra microSD card offers the capacity and performance
consumers need to capture all of life’s moments without having to worry about
what to delete. The card can hold up to 24 hours of Full HD video3 and
with premium transfer speeds of up to 95MB/s**. With A1 performance, the card
can launch and run apps at blazing speeds.
“The microSD card has been an integral part of
the digital revolution by providing more options for high performance, high
capacity storage for smartphones,” said Mark Eng, SanDisk Singapore and Brunei
Country Manager, Western Digital. “SanDisk® cards are at the center of more
than two billion consumer devices, and now with this A1 card, we’re proud to
play a significant role in continuing to advance the trusted format.”
Long used by billions to expand capacity for
photos, videos, music and many other digital files, the, microSD card now must
evolve to support application-intensive environments, paving the way for a new
dimension of memory card performance. With the introduction of the Android
Marshmallow 6 operating system, users can expand storage capacity on
smartphones by selecting the microSD card as preferred or adoptable storage,
which means apps can now be loaded and launched directly from the A1 microSD
card.
The A1 spec allows the new card to manage
random read input-output access per second (IOPS) of 1,500 and write IOPS of
500, so it can quickly open apps and process accompanying tasks, such as audio,
graphics, saved profiles and in-app permissions. With this in mind, the new
SanDisk Ultra microSD card with A1 is designed to provide consumers a faster,
more powerful app experience using cards.
“SD technology is trusted by consumers around
the world for its reliable, backwards compatible and highly interoperable
storage, making it the world’s leading memory format with billions of SD memory
cards and devices in the market,” said Brian Kumagai, SDA president. “The A1
specification will help consumers identify the appropriate card to ensure an
optimal experience when running and launching apps on their smartphone. We are
pleased that SanDisk will release an A1 card, and continues to contribute to
breakthrough technologies enabled by the microSD format.”
The new SanDisk Ultra microSD card with A1 is
compatible with the SanDisk® Memory Zone app for Android™, giving users an easy
way to manage and back up content on their device. The app is available for
free through the Google Play™ Store4. The card is currently
available with a SRP of SGD390.
The complete line of SanDisk® microSD cards
will be available at the upcoming IT Show 2017 among
other promotions, taking place 16-19 March 2017.