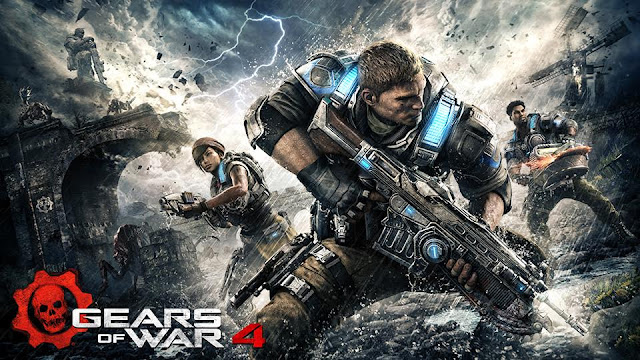 Xbox today announced an update to Gears of War 4 that introduces adds two new maps, the new Ranked Lobby system, improvements to the Gnasher, fan favourite characters to collect, and a whole lot more.
New Multiplayer Maps
Ranked Lobbies
We’re excited to introduce Ranked Lobbies for Core and Competitive playlists! This highly requested community feature improves the flow of matchmaking in Ranked playlists.
When matchmaking for any Core or Competitive playlist, you will now be placed into a pre-game lobby complete with map voting, bounty selection, and customization options. If a player quits prior to the match beginning, the pre-game countdown will cancel and continue searching to keep matches balanced.
Once the match is over, you’ll be automatically returned into the Lobby search for your playlist without having to manually restart. These features will improve the experience of playing in Ranked Game Modes significantly for our players! Keep an eye out for tuning updates to Core and Competitive playlists planned to arrive in the next couple of weeks.
The Month Ahead
We’ll be kicking things off with a brand-new Legacy Character to collect! This Legacy Character will be available in a few weeks via Crafting, but lucky fans may find him (yes, that’s a hint!) early in our March Gear Packs in the weeks ahead.
Speaking of Gear Packs releasing this month; we’ll have new characters and weapon skins to add to your collection during March. Stay tuned to our new official Community Hub to stay up to date with all the latest news and calendar events!
In addition, we’re adding new monthly events for fans to dive into. Set your watches – starting March 24th we will kick-off a Versus themed weekend, followed a week later on March 31st by a Horde themed weekend event! We will continue to add Versus and Horde weekend events with every update. We’ll reveal more about each weekend in the week leading up to the event, but we’re pretty sure Versus Snipers are going to be particularly happy this month.
Gnasher Improvements
Over the past few months, we received numerous reports and videos from users regarding some point-blank inconsistencies with the Gnasher across all game modes. We dived in to investigate, and our findings have led us to making some mechanical changes to the Gnasher that improves its close-range consistency.
Watch our video on YouTube to find out how these changes improve the Gnasher experience in Gears of War 4, or head over to our official website for a detailed breakdown.
Funko Announcement
Funko’s newest set of Pop! figures for Gears of War 4 are coming soon!  These new figures will be arriving later this spring and will include the older and more grizzled Marcus Fenix, Dominic Santiago, Damon Baird, Augustus Cole and Oscar Diaz.  There will also be a “super-sized” 6” tall figure for the iconic Brumak!
Stay tuned to the Funko blog for more information regarding the new Gears of War 4 Pop! figures!
For more information, please visit Xbox Wire.

Are Women at Risk in the 4th Industrial Revolution?