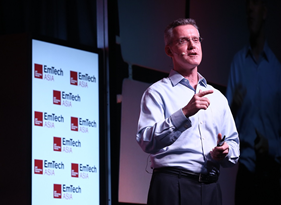 “EmTech Asia is always a great event. We meet
amazing men and women from around the world and we talk about technology that
is going to change the future. There is work in bio-medical areas, in
artificial intelligence, computer vision, virtual reality. It also gives many
people a chance to get together and talk about new things they might be able to
collaborate on, might be able to discover and, most importantly, how they can
contribute to positive things for all of humanity. And we mean that sincerely,
that’s why EmTech Asia is so important and that’s why Singapore is proud to
host it.” said Steve Leonard (pictured above), Founding CEO of SGInnovate and
Disruptive Innovation Partner of EmTech Asia.
One of the key themes
was space exploration, featuring speakers from NASA and MIT such as Dava
Newman, Apollo Program Professor Chair, MIT and Former Deputy Director of NASA;
and David Oh, Project Systems Engineer and Former Lead Flight Director,
Curiosity Mars Rover, NASA Jet Propulsion Lab. Both speakers were also engaged
in a conversational panel hosted by the ArtScience Museum (ASM) in
collaboration with EmTech Asia. The panel was held in conjunction with the NASA
exhibition at the ASM, and was attended by over 130 students, teachers and
media representatives.
The MIT Hacking Medicine
Robotics Singapore 2017, was held the weekend leading up to EmTech Asia 2017
where the winners took to the stage to discuss their hackathon experiences and
the potential for robotics to provide long-term solutions in elderly care and
the overarching healthcare industry in Singapore. Held from 10 to 12 February
at SGInnovate, the hackathon aimed to address unmet needs in elderly care and
medicine and how robotics can play a role in aiding an ageing society. The
winning team, Botler, created a patient-friendly autonomous transport for
social robotics in eldercare.
This year’s conference featured a session on
materials science with Jackie Ying, Executive Director, Institute of
Bioengineering and Nanotechnology, A*STAR. Her presentation, Nanostructured
Materials for Energy and Biomedical Applications, described the synthesis
of metallic, metal oxide, semiconducting and organic nanoparticles and
nanocomposites of controlled size, morphology and architecture while discussing
their unique properties. The cybersecurity session was led by Walter O’Brien,
CEO, Scorpion Computer Services and Executive Producer of hit TV series Scorpion,
who spoke about how countries can better protect themselves against cyber
security threats.
According to Ron Cellini, Analog Garage/Emerging
Business Group at Analog Devices and Cybersecurity Partner of the event, “The
main take away from EmTech Asia is not just the ideas presented but the
enthusiasm behind them. It is great to see the speakers go up the stage and
feel the passion for what they are doing. What’s different at EmTech Asia
compared to other conferences is the quality. The quality of the presentations,
the quality of the folks you meet. You are not going to come here just to hear
presentations that you’ve heard before. You’re going to hear things that are
new and that challenge you. The pace, the interactivity with some of the talks,
the ability of questioning that continually. This conference really encourages
you to participate. I definitely met the right people here. I’ve got a whole
stack of things I need to do when I leave this conference and for me that’s the
best metric for when I go to conferences.”
EmTech Asia 2017 also featured a session on a Brave
New (Bio-Engineered) World, which featured Le Cong, Postdoctoral Fellow,
Broad Institute of MIT and Harvard, who introduced advances on genome editing
tools using CRISPR system, and highlighted how genomics analysis could be
integrated to transform our ability to understand and treat complex diseases
such as cancer. Other sessions include The Story and The Prototype,
by Mike North, Host of Prototype This!, on the  Discovery Channel. Mike
shared his rapid prototyping philosophy of designing story and prototype,
testing them as fast as possible, seeing where they work and fail, and then
iterating to deliver well-branded relevant products. A light-hearted demo was
presented by Adrian David Cheok, Director, Imagineering Institute & Chair
Professor of Pervasive Computing, City University of London during his Everysense
Everywhere Human Communication presentation, where he demonstrated the
Kissenger, Thermal and Electric taste applications with the help of conference
delegates.
10 innovators under the
age of 35 took to the stage to present their elevator pitch at the conference,
highlighting their work and research. EmTech Asia celebrated these 10 young
innovators under the age of 35, recognised on the 2017 regional ‘Innovators
under 35’ list by MIT Technology Review. Their inventions and research were
found to be most ground breaking and exciting from more than 100 nominations
from Southeast Asia, Taiwan, Australia and New Zealand.