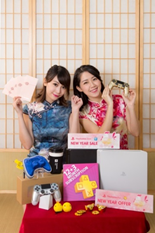 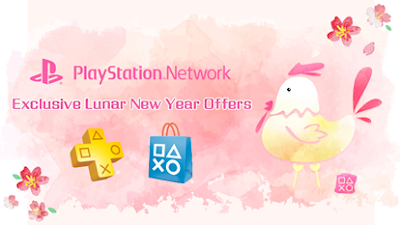 Singapore, 26
January 2017 – Sony Interactive Entertainment Hong Kong Singapore
Branch (SIES) welcomes the Year of the Rooster with special Lunar New Year
deals in the PlayStation®Store (PS Store) for fellow gamers starting
from 26th January till 9th February 2017.
PS Store Lunar New Year Sales
Share the joy and
spread the laughter with family and friends with attractive PS Store Sales of
up to 75% off more than 200 titles including FINAL FANTASY XV, Watch Dogs 2, Battlefield™
1, Call of Duty®: Infinite Warfare and more. PlayStation®Plus
(PS Plus) members can enjoy extra privilege in our sale with exclusive discounts
up to 80%. For details, please read more at the PS Blog from 26th
January. (https://blog.asia.playstation.com).

PS Plus 12+3 Membership Offer
Kicking off the
Lunar New Year, PlayStation is releasing a PS Store exclusive 12-month
membership + 3-month bonus offer! From 26th January to 8th
February, PlayStation gamers will only need to pay the price for a 12-month PS
Plus subscription (SGD 43.90) and get to enjoy a total 15 months of free
monthly games, exclusive discounts, online storage service and online
multiplayer for top titles such as Battlefield™ 1, Grand Theft Auto
V, EA SPORTS™ FIFA 17 and Watch Dogs 2! 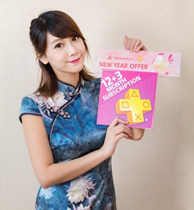 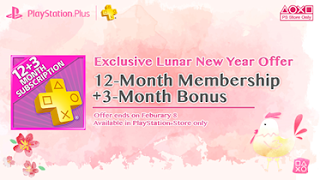 To share even more
joy with all PS Plus members, we are adding an additional title to our list of
January free games! From 26th January to 8th
February, the highly acclaimed PS4 title, God of War™ III Remastered, will be
available for free to download in the PS Store! Together with the already announced
titles, Tales of Zestiria – Digital Standard Edition, and ALIENATION™, the
total value of all three games is worth SGD 144.50.
God of War™ III Remastered
Set in the realm
of brutal Greek mythology, God of War™ III Remastered is the critically
acclaimed single-player game that allows players to take on the fearless role
of ex-Spartan warrior, Kratos, as he rises from the darkest depths of Hades to
scale the very heights of Mt Olympus and seek his bloody revenge on those who
have betrayed him. Armed with double-chained blades and an array of new weapons
and magic, Kratos must take on mythology’s deadliest creatures while solving
intricate puzzles throughout his merciless quest to destroy Olympus. Available
for download from 26th January till 8th February 2017.
Tales of Zestiria – Digital Standard Edition
A brand new
adventure awaits in a fantasy world filled with magic, knights, dragons and
mystery in Tales of Zestiria. Two nations fight for supremacy and the fate of
the realm lies in the hands of Sorey, an inquisitive young adventurer who takes
on the burden of becoming the Shepherd, the one the legends foretold would
become the savior of all. Together with Lailah, the Lady of the Lake, who
guards the Sacred Blade, and his best friend Mikleo, Sorey soon discovers a
powerful force rising in the shadows. Available for download from now till 2nd
February 2017.
ALIENATION™
Lead your elite
squad in the fightback to save Earth from a huge alien invasion in this
frantic, top down twin-stick shooter. With hordes of alien creatures swarming
across the planet, you’ll need to work together with up to three friends to
devise tactics and keep each other alive under mounting pressure. As teammates
drop in and out of the action at any time, it’ll take everything you’ve got to
repel the overwhelming forces and prevent global annihilation. Available for
download from now till 8th February 2017.


To celebrate a
prosperous New Year with our members, PS Plus will be launching a 4-day “PS
Plus Lucky Rooster” Campaign from 28th to 31st January. Keep
an eye on our Facebook page (@PlayStationAsia) every day at 1pm (+8 GMT) and
you may win yourself a prize!

Learn more about
PlayStation®Plus member services and offers from https://asia.playstation.com/sg/en/psn/psPlus.

Securing Our Smart Cities: Why We All Need to Be Aware of the Threats Out There