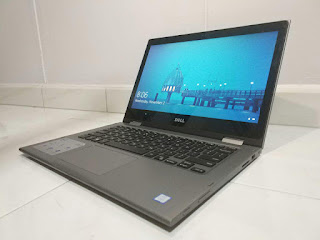 The Dell Inspiron 13 5000 2-in-1 notebook has just been released with the latest Intel Kaby Lake processors. With these new processors, mobile laptops are slated to undergo a revolution, as they enable a lower power consumption per performance metric. This means that end-users are going to enjoy longer battery life and better performance. With better power efficiency, these mobile laptops will also perform much cooler, resulting in the emergence of many different form factors, user scenarios and versatility. In this review we are going to take a look into the various features and characteristics of the Dell Inspiron 13 5000 2-in-1 notebook, and see what the future in the now has brought us. 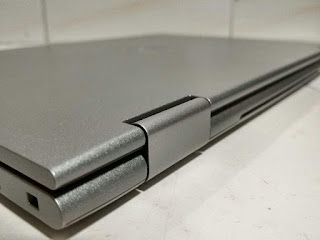 The 360 flip form factor notebooks are rather common these days after Lenovo popularized such a concept with their Yoga series devices. Manufacturers like Dell and ASUS followed suit, aiming to produce the best possible machine of such kind. While these devices do not differ largely in terms of their physical designs, there are small areas that are worth noticing, which enables each of them to stand out prominently. In the following sections, we will first take a look at the specifications and design of the Dell Inspiron 13 5000 2-in-1 notebook to understand how it is geared up to competition, followed by some performance benchmarks to determine the prowess of the new Kaby Lake Intel processors. Lastly, we will take a deep dive into the various areas of the notebook to find out if the laptop provides good user experience with all its hardware and features built in. 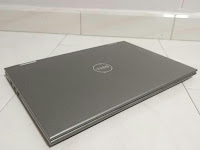 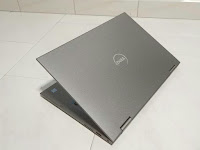 Dell has decided to go with a more serious dark gray colour for the device so as to attract a more professional audience. The notebook is designed with angular edges instead of a more conventional clamshell style. Therefore, the aesthetic focus was put onto joints between the screen and the main keyboard area. This gives the notebook an overall sturdy feel, yet retaining a rather simple and minimal design. With our stereotypical minds, we think that such a conventional, yet different and simple design would be suitable for knowledge workers who are experts in their field. Some examples include engineers, software developers and possibly students.

To make sure that the laptop remains light and portable, Dell has went ahead with polycarbonate as main material for the exterior built. This material is simulated to look like metal, giving the notebook an additional premium feel. 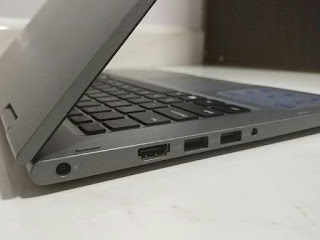 On the left side of the notebook, there are the power jack, HDMI out port, 2 x USB 3.0 Ports and a single 3.5mm audio in/out jack. 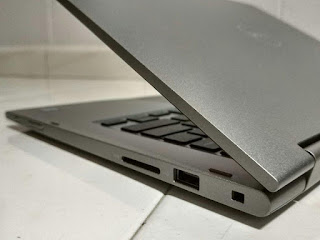 On the right side, there are the Nobel Lock slot, a USB 2.0 port and a SD Card reader slot. 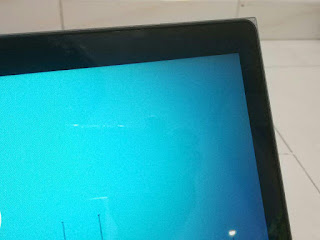 Despite all the good things that were discussed previously, we still disliked the fact that this model had rather large side display bezels. In fact, based on the actual size of the notebook, it could have possibly been fitted with a 14 inch display. Alternatively, the overall size of the notebook could have been reduced, if Dell was able to squeeze all the hardware within an actual diagonally 13 inch area, without increasing the height/thickness of the laptop. 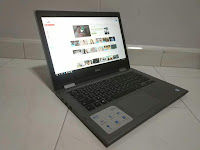 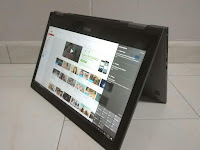 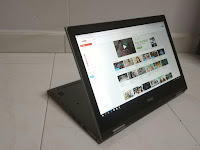 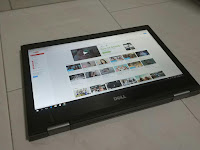 With the 360-degree hinge, this device can also work in various modes, thus engaging users from different perspective. It can be a regular notebook that is tuned for productivity applications and general usage, or in a tent mode for showing off content to other people, or simply tablet mode for computing experience on the go.

To properly give our thoughts on this device, we are going to explain our experience by focusing on the interaction between the human user and the device. There are three main sense that humans use to interface with a laptop, specifically the sight, hearing and touch. 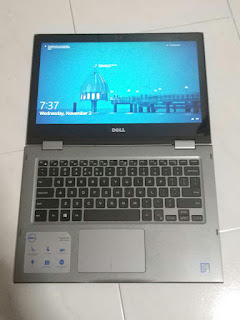 The Dell Inspiron 13 5000 2-in-1 notebook is equipped with a Full HD display with True Life technology. The True Life technology is said to represent colours on the display as close to real life as possible, and thus promises an overall pleasant viewing experience. Based on our own opinions, the notebook’s high gloss glass brings out the best possible combination with a Full HD display panel, much suited for entertainment media consumption. Videos and movies look exceptionally stunning and colours are well represented. Some other notebooks tend to over saturate certain colours on the display so as to make colours ‘pop’ out from the display, but this method affects the accuracy of the original content. Dell does such optimization on the display adequately, making it a good display for all different kinds user scenarios. 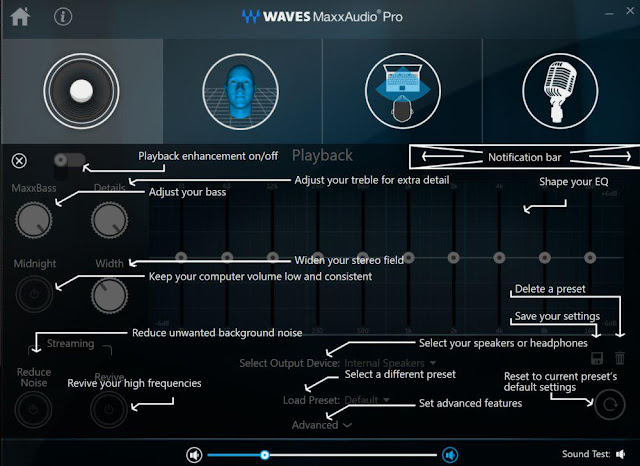 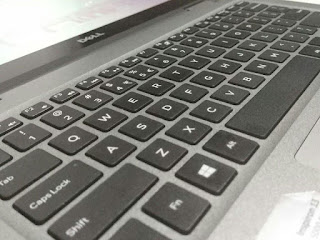 Users usually communicate with their notebooks via the keyboard, trackpad and possibly with touch on the display. These interfaces are fundamental to the overall user experience on the notebook. The Dell Inspiron 13 5000 2-in-1 notebook provided us with a full sized keyboard that was easy to adapt to. Moreover, it was a pleasure typing on them, as each key’s short travel and “spring feedback” leads to a rather comfortable experience. This chicklet style keyboard also allowed us to type very quickly and accurately. 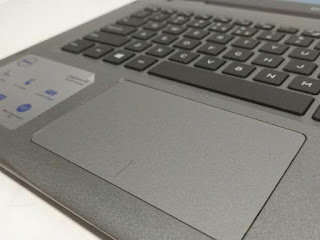 Dell has definitely improved the performance of their trackpad. With appropriate hardware and drivers, the trackpad was able to be extremely responsive to touch. Furthermore, recognition of multi-touch inputs have also greatly improved, and we were able to scroll with two fingers smoothly on this device. Users can also intuitively control the system with the multi touch enabled trackpad. For example, to resize icons or images, they can simply pinch their finger on the trackpad. 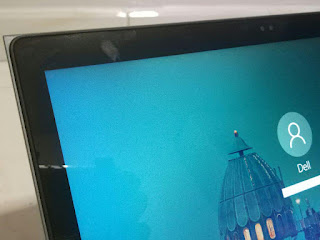 The Dell Inspiron 13 5000 2-in-1 notebook is also equipped with a touch display. While the device performed well with touch inputs on the screen, there were some quirks that were associated with it. It appears that the display panel was not well built and integrated with the touch sensors, and sometimes, parts of the screen will discolour when force was applied. Moreover, as the display is also made with a high gloss glass, fingerprints and stains are imminent.

Even though the New Dell Inspiron 13 5000 2-in-1 notebook is integrated with the latest and greatest Intel Kaby Lake processors, we think that the main reason for such a responsive and “fast performing” notebook was due to the fact that it is utilizing a Solid State Drive rather than a conventional hard drive. Every single action on the notebook just appears to be so snappy. Programs opened quickly, and coupled with fast wireless internet and a huge 8GB RAM, internet browsing or any other non-graphics intensive applications just simply superseded our expectations.

The SSD was also on par with mainstream technology out in the market. It provides quick access times and was able to write large amount of data quickly and reliably. The write speeds of the SSD could have been improved though, as we have seen other SSDs in the market with higher write speeds.

Other than the SSD, we have also placed the new Intel Kaby Lake Core i7 7500U to test, to realize its real potential in today’s mobile computing era. In the PC Mark 8 test below, real world applications are simulated and a benchmark score is created based on the performance of the computer on these applications. 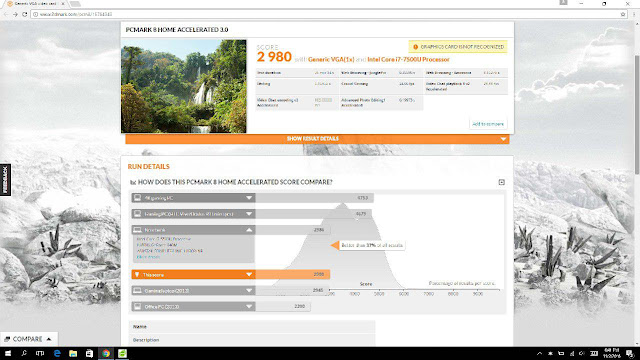 The Dell Inspiron 13 5000 2-in-1 notebook performed well, exceeding 37% of all computers that were tested with this software. This also includes all desktop computers and workstations. It had similar performance to a laptop with the 5th Generation Core series with a dedicated graphics. This also has shown how much performance has been improved on the new Intel graphics chips.
We were even able to play some simple games at 720p resolution on the this Dell Inspiron. Of course, most graphics demanding 3D games would not be able to perform to an acceptable level on this notebook due to the lack of a high end dedicated graphics card. 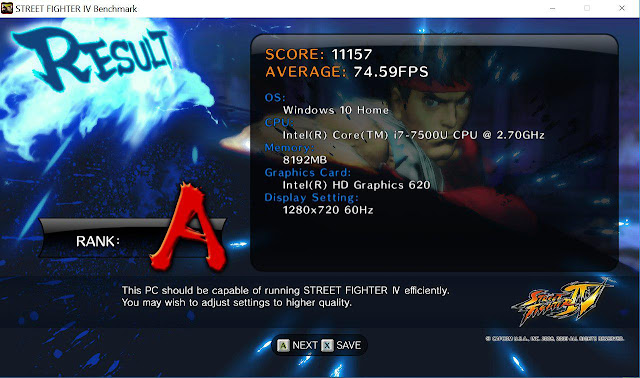 Based on the reports provided by Microsoft Windows 10, the Dell Inspiron 5000 2-in-1 notebook was able to give us up to 14 hours of battery life. This reading was taken based on our constant usage of web browsing and some productivity work. This also means that if further optimization was taken and a more suitable power profile was used, the Dell Inspiron 5000 2-in-1 notebook could easily reach a longer usage period over a single charge. 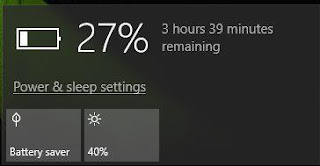 We really like the fact that Dell did not preinstall any additional software on the computer. It was always a pain in the neck to have manufacturers install unnecessary and distracting bloatware that slows down the overall computer. Dell has kept additional software to the minimum, and only kept the most important software, such as the Dell updater and Power Manager. Thank you for that. 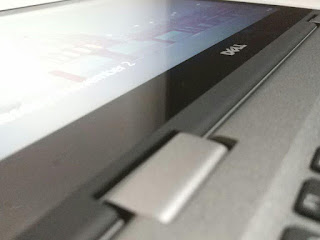 In general, the Dell Inspiron 13 5000 2-in-1 notebook is a well built and a great device that suits the majority of all mainstream users. With its great hardware that are tuned to providing great entertaining value, users will enjoy their time on this device while consuming media. At the same time, with a comfortable keyboard and highly responsive trackpad, professionals can also complete their work efficiently on this device.
The Intel Kaby Lake Core i7 processor has brought in the next era of computing to end users. It is the first time where we see so much potential in computational performance packed into a highly portable device, yet at the same time consumes less power than its predecessors. The Dell Inspiron 13 5000 2-in-1 notebook took the advantage of the new processors and combined it with excellent hardware user interfaces. This has gave us a wondering experience while testing and reviewing the unit.

Benchmarking Clarifies the Future of Internet of Things