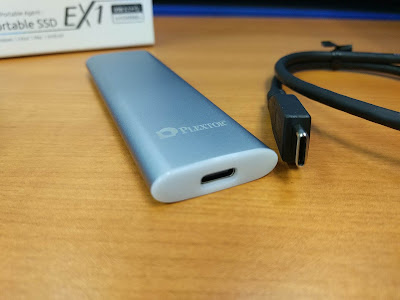 Plextor has been making the waves with their new SSD storage solutions. Previously, we were completely impressed by the performance of the M8Pe NVMe SSD. Will the Plextor EX1 live up to its brand name?

The SSD market has been steadily gaining traction. Prosumers who work in areas like videography and photography saw real benefits with SSD, which is able to provide improved reliability and higher transfer rates. As mainstream consumers are increasingly educated with the advantage of SSD technology, many are slowing migrating from traditional hard disks to SSDs as a main back up and storage solution. Price and availability is perhaps the only reason limiting a full scale mainstream adoption of SSD technology.

Plextor released the Plextor EX1 earlier this month. We managed to get our hands on a unit, and in this review, we will be testing out the new Plextor EX1 Portable SSD in terms of its design and performance. 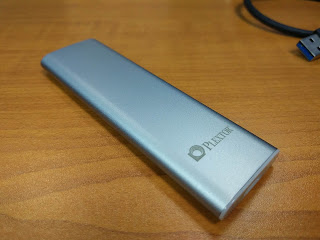 The Plextor EX1 is a highly portable external SSD solution. The Plextor EX1 puts down competing products in terms of its design. This external SSD shines with a professional looking metallic finish, that is available in gold or silver. The use of metal as a material for its enclosure also gives the SSD physical strength, allowing it to be more rugged and reliable as internal components are well protected from harsh external environments.

The Plextor EX1 interfaces with the host computer via the USB 3.1 standard. The new USB 3.1 standard promises better signalling between the device and host computer. This has resulted in a much higher transfer rate capabilities for peripherals. Specifically, USB 3.0’s bandwidth is rated only at 5Gbps, while USB 3.1 is rated at 10Gbps. We were sure that the SSD’s memory speeds will not be bottlenecked by its own transfer interface with USB 3.1.

The specifications of the system that was used for the tests are as follows : 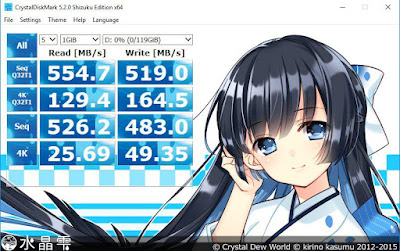 The true performance prowess of the Plextor EX1 portable SSD can be shown with the Crystal Disk Mark test. In this benchmark test, the SSD was able to sustain sequential read and write speeds that were in fact ahead of its own rated specifications.

Noting that most users who uses a SSD as an external storage medium are mainly videographers and photographers, the type of files they deal with are usually multiple large files. Since files are large, the sequential read and write speeds should show the kind of speeds that is provided by transferring these videos and photo files. In fact, these astonishing numbers could possibly make the Plextor EX1 portable SSD one of, if not in fact, the fastest external SSD available in the market (based on the time of the review). 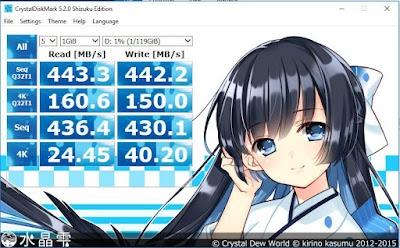 If you do not have a USB 3.1 compatible port on your system, a USB 3.0 ports will work just fine as well. We did a test with the Plextor EX1 via a USB 3.0 port, and the results are as above. It is apparent the the SSD is bottlenecked by the transfer interface, as speeds will plateau at about 443MB/s. However, it must be reiterated that the drive still performs much better than any other conventional external hard drive. 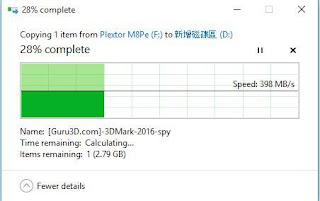 In a real world test, we transferred a single large zip file from a local SSD to the Plextor EX1. The NVMe Plextor M8Pe was selected as the sending SSD. This prevents any form of read bottlenecks from other storage units.

We managed to consistently reach a transfer rate of 398MB/s by sending a 4GB zip file from the Plextor M8Pe to the Plextor EX1. This test was done with the EX1 plugged into an USB 3.1 port. These numbers really do show how fast and furious this external SSD is!

There is no doubt that the Plextor EX1 is one of the fastest external SSD that is available in the market right now. In additional to being a performance king, the Plextor EX1 is also well designed and extremely portable. With such an innovation in design and specialized storage technology, Plextor has opened the industry up for many new applications. It could be possible that Bring Your Own Operating System could be the next big thing, as problems regarding performance, portability and reliability is now out of the way with the new Plextor EX1.

The EX1 will be available in three different capacities (128 / 256 / 512 GB) to choose from, and the entire series comes with a 5-year limited warranty from Plextor.

ASUS AiProtection Neutralizes an Average of 1.5 Home Network Attacks and Risks Every Day on Each Protected ASUS Router