Singapore – 13 October 2016 – Criteo (NASDAQ: CRTO), the performance marketing technology company, today released its 1H 2016 State of Mobile Commerce Report, which provides insight into consumers’ shopping habits and predictions for mobile commerce across the region. The report highlights that mobile devices are beginning to dominate the online commerce landscape, especially in the Asia Pacific region. With mobile accounting for 60 percent and 54 percent of all eCommerce transactions in Taiwan and Southeast Asia respectively, regional retailers who can capitalise on this trend will be successful at driving transactions in the shopping seasons that follow.

“The Asia Pacific region has been a mobile commerce powerhouse for a few years now, driven by multiple device ownership in developed markets like Hong Kong, Japan, Singapore and Taiwan. These markets are now being joined by rapidly growing “mobile-first” or “mobile-only” markets like India, Indonesia, Malaysia and Vietnam. With increasing affluence and improving technological infrastructure set to bring even more consumers online and on smartphones, it is only a matter of time before the region establishes itself as the clear global leader in mobile commerce transactions,” said Yvonne Chang, Executive Managing Director, Asia Pacific.

“Mobile commerce has reached a tipping point and is surpassing desktop purchasing as regional retailers continue to invest in mobile shopping platforms. However, retailers must go one step further and create a truly seamless mobile and cross-device experience to engage users along their digital paths to purchase. Brands that master the mobile trend will have a head start over competitors, as well as the momentum to lead the pack in the shopping seasons ahead,” added Chang.

Criteo’s research shows that brands can no longer ignore mobile platforms as a primary means to drive eCommerce sales. While technology enhancements have facilitated shopping on mobile, marketers are challenged with targeting consumers across every environment along the path to purchase. To boost revenue, retailers must therefore combine a strong mobile web and app presence with personalised mobile targeting strategies to engage with shoppers wherever and whenever they browse and purchase. 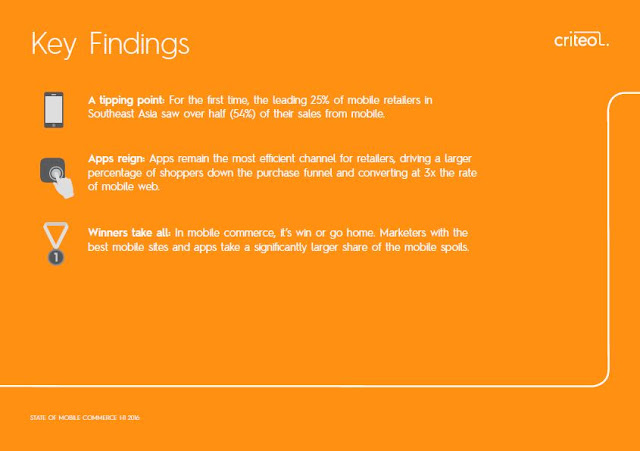 Mobile Shopping Dominates: The number of regional shoppers going online, be it via desktop or mobile, to both browse and purchase products continues to grow, with a higher rate of transactions captured on mobile devices than via traditional digital purchase paths. Retailers who have optimised their mobile shopping experience accordingly – both in-app and on mobile – are pulling away from their competitors and continue to see strong traction from consumers:

Smartphone-Focused Shoppers: The smartphone continues to expand its prominence as the go-to shopping device, especially as features like fingerprint recognition make transactions effortless, while tablet purchasing steadily declines. All retailers should ensure they have a mobile-centric marketing strategy that embraces in-app and the mobile web to meet their smartphone-focused audiences. For the Asia Pacific region, the region-specific data highlights that retailers must focus on mobile optimisation for smaller screen sizes and making their apps available on Google Play, rather than just the Apple App Store.

Sophisticated Apps Drive High Spending: Top retailers are building savvy, intuitive and useful shopping apps that give consumers a seamless way to shop on mobile devices. Capabilities like home screen presence, instant loading, offline content, push notifications, personalisation and access to native functionality make the mobile shopping experience richer and more immersive for consumers. Brands that can deliver this feature-rich environment and create a unified, consistent and relevant experience for shoppers regardless of device will succeed in driving retention and conversion rates: 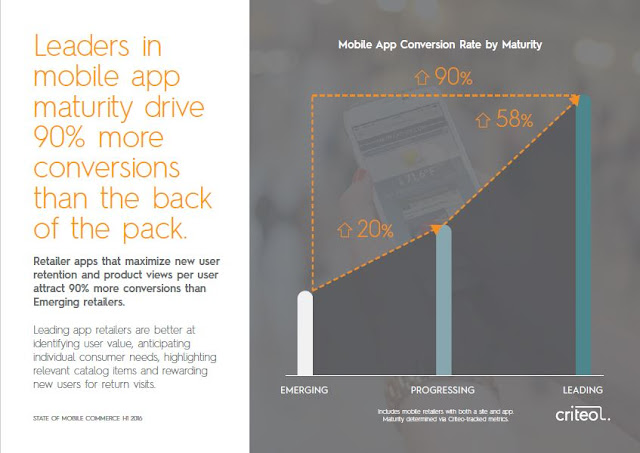