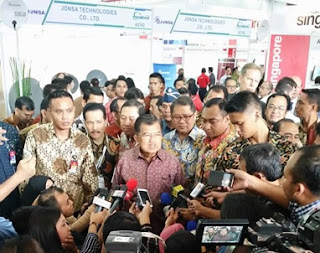 Jakarta, Indonesia, 8
September 2016: The organiser of
Indonesia’s first major ICT event – Communic Indonesia 2016 – today announced
that the inaugural show was a huge hit – with 5,691 trade visitors and 266
exhibitors from 28 countries taking part in the show across four days.Hosted by PT. Pamerindo Indonesia, a member of Allworld Exhibitions, Communic
Indonesia was held at The Jakarta
International Expo last week and attracted industry professionals from across
the globe, providing a showcase of the latest products and state-of-the-art
technologies in 5G, Big Data, the Internet of Things (IoT), Cloud and Security.

The show was supported by Indonesia’s Ministry
of Communications and Information Technology and opened by Indonesia’s Vice
President H. Muhammad Jusuf Kalla. This created a huge buzz around the
exhibition and the conference, with a number of companies such as Telkomsel and
CDN Solutions also making exclusive industry announcements.

“The feedback we have received from the visitors and exhibitors of Communic
Indonesia has been extremely positive, especially in relation to bringing such
a huge and diverse technology show to the region” said Victor Wong, Project
Director at Singapore Exhibition Services. “This is the first event of its kind
in Indonesia and the popularity of it shows just how relevant it is to the
region. We look forward to welcoming even more visitors to next year’s show.”

The show’s exhibitors – including Samsung, AsiaSat and Infinet Wireless – came
from 28 different countries including, Hong
Kong, India, Indonesia, Malaysia, Canada, Australia, United Kingdom and the
United States of America. Several solutions showcased were claimed
to be critical to accelerating the
development of Indonesia’s ICT ecosystem to fulfil the aim of
becoming Southeast Asia’s largest digital economy by 2020.

In addition to the exhibition, Communic Indonesia also featured a two-day
conference with three main tracks; Broadband and IoT, E-Commerce and Satcom,
each including plenary sessions, keynote speakers and panel discussions. Day
one alone pulled in 1,926 visitors to the Expo, with the most popular panel
sessions and presentations, including ‘Efficient Fiber-to-the-Home (FTTH)
Deployment’ hosted by Paul Macaulay, President of the FTTH Council Asia-Pacific
and the ‘Power Hub: Provisioning Broadband Networks in Asia’ panel, moderated
by Heru Sutadi, Executive Director of the Indonesia ICT Institute.

The ICT Summit was co-located with Broadcast Indonesia – an International
Digital Multimedia and Entertainment Technology Exhibition & Conference –
which provided a platform for top industry leaders to network in one of
South-East Asia’s most up and coming markets.

Following the success of this year’s show, dates for next year’s show have
already been confirmed. Communic Indonesia 2017 will be held at The Jakarta
International Expo, in Kemayoran, from October 25-27, 2017 and will
again be co-located with Broadcast Indonesia.