GTX 1070 Notebook Edition could be faster than its desktop variant! - The Tech Revolutionist

GTX 1070 Notebook Edition could be faster than its desktop variant!

Home » GTX 1070 Notebook Edition could be faster than its desktop variant! 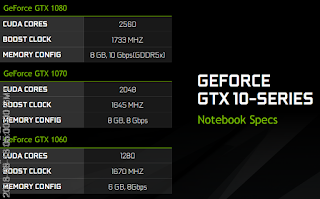 Many were shocked when the GTX 1070 for notebooks were
announced. Some even thought that there was a typo in the slides presented by
NVIDIA, but apparently, the GTX 1070 that are found on gaming notebooks could
possibly outperform a desktop GTX 1070 version with some overclocking.
To reduce the power draw from the notebook version of GTX
1070, but at the same time retain the performance of the same desktop card,
NVIDIA has decided to increase the number of CUDA cores in the notebook based
GTX 1070 and reduce its clock frequency. This design consideration allows it to
run at a similar speed as compared to the desktop version of the GTX 1070, but
also keep it within temperature and power limits.

Since there is no architectural difference between the two cards,
if the notebook GTX 1070, which contains 2048 CUDA Cores was to be overclocked from 1645MHz to reach the
frequency of the desktop version GTX 1070 of 1683MHz, it could likely be more powerful
than its desktop sibling. These new GTX 10 series graphics cards for notebooks are even specially designed and made to be pushed to their limits, featuring Dual-FET power supply and multi phased power controllers. NVIDIA wants their users to truly realise the potential of a NVIDIA GTX 10 series graphics card.
NVIDIA has also stated that with the new GTX 10 Series Graphics Card launched for notebooks, they will also work with notebook manufacturers to come out with Overclocking tools. These new laptops should be able to support overclocking out from the box with the provided software and utilities. Manufacturers could possibly factory overclock the new graphics card to gain even more performance out of it.