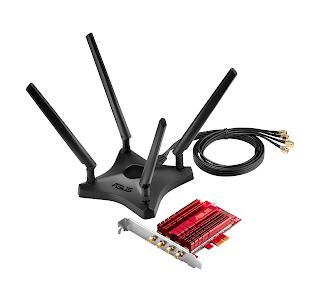 KEY POINTS
·
Instantly upgrade a desktop PC to dual-band 4×4
802.11ac Wi-Fi with AC3100 speeds of up to 2100Mbps (5GHz band) and 1000Mbps
(2.4GHz band)
·
Delivers better coverage and up to 60% faster
Wi-Fi speeds than 3×3 802.11ac adapters
·
External magnetic antenna base allows flexible
antenna placement for the best possible reception
Singapore  — ASUS today announced PCE-AC88, a dual-band 802.11ac Wi-Fi PCI
Express® (PCIe®) adapter that instantly upgrades a
desktop PC to the latest ultra-fast wireless standard.
PCE-AC88 is the first PCIe adapter to feature a
4×4 (4 transmit, 4 receive) MIMO design that delivers AC3100-class speeds of up
to 2100Mbps on the 5GHz band and 1000Mbps on the 2.4GHz band.
For the best signal reception, PCE-AC88
includes a magnetic antenna base that allows flexible placement of the four
detachable external antennas on any suitable surface.
PCE-AC88 allows PC users to take advantage of
the latest high-speed 802.11ac routers, which offer wireless speeds that match
or exceed wired Gigabit Ethernet networking speeds. When paired with a 4×4
802.11ac router, PCE-AC88 unleashes the full performance and coverage potential
of the 4×4 MIMO technology, but it is also backward-compatible with all
existing Wi-Fi standards.
Ultra-fast 802.11ac Wi-Fi — on a desktop PC
The latest ultra-fast 4×4 802.11ac routers
require compatible 4×4 Wi-Fi clients in order to unlock the full potential and
speed of the 4×4 MIMO architecture. ASUS PCE-AC88 is the first 4×4 802.11ac
PCIe adapter for desktop PCs, and uses NitroQAM™ (1024-QAM) technology to
unleash full 4×4 data speeds of up to 2100Mbps on the 5GHz frequency band and
up to 1000Mbps on the 2.4Ghz band — speeds that are up to 60% faster than a 3×3
802.11ac adapter. With these faster-than-wired speeds, users can upgrade their
desktop PC instantly to enjoy the benefits of smooth streaming and latency-free
online gaming.
4×4 MIMO design for wider range and more stable
signals
ASUS
PCE-AC88 is equipped with four external detachable antennas to provide wide
coverage and stable signals. The antennas are attached to a convenient magnetic
base for flexible placement that can be securely positioned horizontally or
vertically on any suitable surface. With this flexibility, users do not need to
relocate their desktop PC in order to optimize Wi-Fi reception.
In order to
ensure non-stop operation even under the heaviest loads, PCE-AC88 features a
custom heatsink design for optimum heat dissipation, resulting in improved
stability and reliability.
AVAILABILITY
& PRICING
ASUS PCE-AC88  will be launched during COMEX 2016 at S$169.