The death of MakerBot is not the death of an industry
By Rachel Gordon, Technology Analyst, IDTechEx 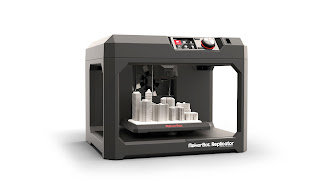 Following the progress of MakerBot, it is easy to be despondent about the whole desktop 3D printing industry. For a short time back in 2010, MakerBot was 3D printing. Anyone who wanted a desktop 3D printer could buy a MakerBot kit or build a RepRap. MakerBot was the market leader and almost synonymous with desktop 3D printing for many years.
In April, MakerBot announced it would lay off its factory workers, outsourcing the manufacturing of all MakerBot printers to Jabil. Thiswill reduce manufacturing costs, removing the fixed costs associated with maintaining a factory in New York City. Manufacturing in China will certainly be cheaper than in Brooklyn but MakerBot have run a “Made in America” campaign for a long time. This is another step away from the Rep Rap beginnings, and the 3D printing community are unhappy. This echoes when MakerBot announced the Replicator 2 would be closed source, after years of supporting the Open Source Hardware movement. These announcements make big waves within a small community of 3D printing enthusiasts, but it remains to be seen how much impact it has on new customers buying machines.
The slow decline of MakerBot
Before 2013, MakerBot sold an impressive 40,550 printers. When Stratasys acquired MakerBot, an IDTechEx analyst wrote, Stratasys“may have paid a very high price for a quick foothold in an ultimately relatively small market with an increasing number of competitors. If MakerBot has sold out to the big corporate world in merging with Stratasys… it got a jolly good price indeed.”
According to the Stratasys 2014 Annual Report, in that single year, MakerBot sold nearly 40,000 printers. In 2015, they sold just18,673. In April of 2015, MakerBot laid off 100 of its approximately 500 employees and in October laid off another 80. The MakerBotstorefronts in New York City, Boston, and Greenwich were all closed.
This was partly due to the poor reputation of the Smart Extruder on the 5th generation machines. Estimates for the mean time before failure for the MakerBot Smart Extruder were between 300 and 500 hours. Jonathon Jaglom, CEO of MakerBot, has said “86% of all failures of 5th gen MakerBots were with the extruder.”
MakerBot reached total sales of 100,000 printers on 4th April 2016. This equates to selling only 1,421 MakerBots in four months of 2016. Sales of desktop 3D printers are seasonal and tend to pick up in Q3, but the MakerBot brand is now worth far less than the $400 Million Stratasys spent on it.
Has desktop 3D printing failed to spread beyond early adopters?
When industry leader is struggling it is tempting to talk about the market saturating or the technology not overcoming the “chasm of despair” as it hasn’t spread past the early adopter enthusiasts.
However, in the new report 3D Printing 2016-2026, IDTechEx Research estimate that over 375,000 desktop thermoplastic extrusion printers were sold during 2015.
MakerBot have hundreds of competitors also making very similar desktop thermoplastic extrusion printers. The price can be very low and the quality is very variable.
The rise of China
300,000 of these 3D printers were sold by the Taiwanese company, XYZPrinting. These sales absolutely dwarf the 100,000 cumulative sales by MakerBot to the point where it seems almost unbelievable. The Chinese government pledged to put a 3D printer in every one of their 400,000 elementary schools.
The DaVinci printers are rebranded and distributed by tech giant Lenovo, who has substantial brand power. It is an increasing trend that well-known household names, such as HP, Ricoh, Autodesk and Mattel, are entering the industry with considerably more brand power and marketing budget that has been seen in the industry so far.
The DaVinci printers are available from $450, compared to $2000 for a MakerBot. At this low price, the technology has become available to many home users across Asia, who previously could not afford it. The average selling price of desktop 3D printing will continue to fall.
It is definitely the best quality 3D printer for this price. Out of the box, the printer is preassembled and precalibrated. Ease of use is a top priority of the education market. The printers are not only attractive to Asian customers but are getting attention and recognition across Europe and America.
The return of vendor lock-in
Users are required to buy all their filament through XYZPrinting. There is little, if any, profit to be made selling a $450 3D printer. However, now over 300,000 users are all buying filament at the currently reasonable price of about $29 for 600g, and will be locked in to buying more of that filament regardless of price hikes. This will stabilise the thermoplastic filament prices.
This is the beginning of a shift from Western companies manufacturing small numbers of 3D printers to consumer electronics manufacturing on a serious scale in Asia. This a standard pattern, new technologies are manufactured on a bigger scale at a cheaper price in Asia, and they become available to more of the global population. Unit sales grow, but price crashes.Learn more about the new IDTechEx Research report “3D Printing 2016-2026” at www.IDTechEx.com/3d.