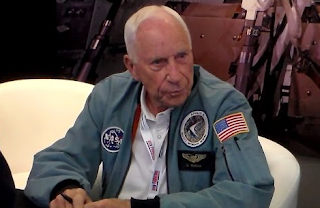 Farnborough, U.K. and Waldwick, N.J./June 7, 2016 — Al Worden is on a mission. Nearly 45 years since his flight to the Moon, and more than half a century since graduating from the U.K.’s esteemed Empire Test Pilot School, the Apollo 15 Command Module Pilot will return to Farnborough this July, in partnership with Kallman Worldwide, to promote Science, Technology, Engineering and Math (STEM)education — during Farnborough International Airshow.
Worden’s visit in part will be as a designated representative of the Astronaut Scholarship Foundation (ASF), a not-for-profit organization founded by the Mercury 7 astronauts. ASF advocates for STEM by promoting the fields of study and providing support for America’s most promising students.
Worden will be hosted by the U.S. International Pavilion, which since 1994 has been organized at Farnborough by Kallman, incoordination with government agencies including the departments of Commerce, Defense and State. He is expected to participate innumerous official events, including the Pavilion opening ceremonies, presentations and receptions.
Kallman and Worden first collaborated during last year’s Paris Air Show, where the astronaut entertained and inspired thousands of visitors, young and old, with the story of his Apollo mission “Aerogare USA,” the Kallman-produced public weekend celebration of U.S. innovation in aviation.
“This year’s Farnborough International Airshow will feature an extraordinary cross-section of America’s aerospace industry, with highlights such as demonstration flights of the Lockheed Martin F-35 and a commemoration of the Boeing Company’s 100th anniversary sharing the spotlight with the booth-to-booth, nuts-and-bolts business of flight,” said Tom Kallman, president and CEO of Kallman Worldwide. “STEM connects it all. We’re proud to partner with Al Worden during Farnborough 2016 to engage and enlist our industry to promote educationthat will expand horizons for future pioneers.”
Worden’s visit to Farnborough coincides with growing global interest and investment in space exploration and commercialization, particularly in the private sector, along with increasing development of space-based weapons to support national defense strategies.Worden notes these trends forecast a growing job market in space, and an imperative for peaceful nations to take the lead in developing the future space workforce.
“As one of only 24 people to have flown to the Moon — on tax-payer funded flights — I can tell you there has never been a shortage of people who want to explore space,” said Worden. “As technology and financing become more accessible to private enterprise, more people will have the opportunity to not only explore but also work in space. My mission, and I hope it is shared by the industryrepresented at the Farnborough International Airshow, is to ensure that young people with the passion for this profession have theeducational opportunities and support they need to pursue their dreams.”