Samsung today announced the availability of the Samsung Galaxy S7 4G+ and S7 edge 4G+ in Pink Gold and the Samsung Gear 360 in Singapore. Exuding stylish sophistication, the new colour variant of the Galaxy S7 4G+ and S7 edge 4G+ features a refined design and powerful functionality encased in a radiant Pink Gold colour hue, while the Gear 360 allows users to easily create, view and share memorable experiences through immersive 360° video and still image content.
Compact Design with High Performance for Every Activity 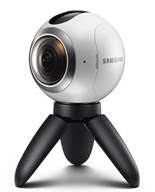 Equipped with dual fisheye lenses of 15MP image sensors each, the Samsung Gear 360 gives users the ability to capture up to Sub-UHD 360° videos, while supporting 30MP still images. Users are also able to shoot 180° wide angle video and images by activating one of the two camera lenses. Built for any time of the day, Gear 360 offers f2.0 bright lens, so users can create high resolution images and full panoramic videos even in lowlight conditions.
With a light and compact, spherical shaped design, Gear 360 maximises portability to film indoors or on the go. From travel to adventure, the IP53 Splash and Dust Resistant* Gear 360 makes a universal companion. The Gear 360 also features a user-friendly tripod, and is compatible with a wide selection of accessories and mounts currently available on the market.
The Galaxy Experience

Samsung continues to push the boundaries of hardware, software and services to create devices that are designed to improve how consumers connect, share, organise and get more out of life. By introducing a constellation of seamless mobile experiences, Samsung is redefining what is possible, beyond the limits of today’s technology.
The Samsung Gear 360 is compatible with selected Galaxy smartphones including the Galaxy S7 edge 4G+, S7 4G+, S6 edge+ 4G+, S6 edge 4G+, S6 4G+ and Note 5 4G+. When paired with a compatible device via Bluetooth®, users will be able to preview content in real time when the Gear 360 is recording. The Gear 360 will also automatically display filmed content for users to view and save on their smartphone, or to upload and share directly on social channels including Facebook, YouTube, and Google Street ViewTM. For a truly immersive 360° viewing experience, users can enjoy watching self-created content through the Samsung Gear VR. All these features will be available through the Samsung Gear 360 Manager app, available for download from Galaxy Apps and Google PlayTM store, and the Gear 360 ActionDirector program, a PC software for more in-depth editing capabilities.
Local Pricing and Availability
The Galaxy S7 4G+ in Pink Gold will be available from this 14 May 2016 at the recommended retail price of $998, while the Galaxy S7 edge 4G+ in Pink Gold will be available from 28 May 2016 at the recommended retail price of $1,098. Both devices, which come with built-in memory of 32GB^, will be available at all local Telecommunication Operators, IT/ Consumer Electronics Stores, Authorised Retailers and Samsung Experience Stores.
The Gear 360 will be available from 21 May 2016 at a recommended retail price of $498 from the online stores of Key Telecommunication Operators and IT/ Consumer Electronics Retailers, and at Lazada Singapore.
*Splash and Dust Resistant (IP53 rating) means that the device is protected against harmful deposits of dust and water falling as a spray up to 60° angle from vertical, for up to 5 minutes under certain defined test conditions. According to accredited test results: individual results may vary. Note: IP53 rating does not mean that the device is waterproof or water resistant.
^ Actual user-accessible internal storage is less than specified total memory due to operating system, software and other built-in applications, and may vary after software updates/upgrades.