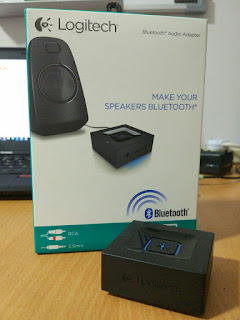 Stucked with a great pair of speakers that lacks bluetooth wireless audio capabilities? Want to pair your smartphone and play songs wirelessly to any non-wireless speakers? The Logitech Bluetooth Audio Adapter will do the job just fine! You can now enjoy wireless music to your favourite non-bluetooth speakers.

Usage and Setting up 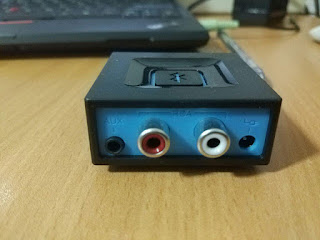 One may realise that a bluetooth headset that allows an 3.5mm jack for audio output may also fit the requirements. Based on our personal experience, as these bluetooth headsets are designed for portability and they are built with a internal battery, it may not be suitable to be always plugged into the power point and put in a permanent charging state. Our previous bluetooth headset died after the internal battery refused to hold any charge after left in the previous mentioned situation.

Bluetooth Audio Adapters are made to be placed in a permanent spot and would not face such issues. Moreover, they also support more connectivity options and features, which is much preferred in a fixed location set up.

Our thoughts and Conclusion 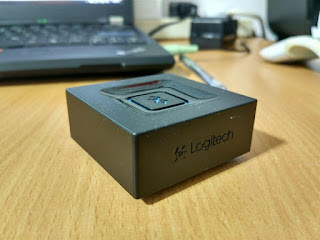 As a non-audiophile user, there is exactly no noticeable difference in audio quality between audio transmitted wirelessly via the Logitech Bluetooth Audio Adapter, or via physical audio cables. Audio quality and performance was determined by the type of speaker system owned. The Logitech Bluetooth Audio Adapter also supports Multipoint Bluetooth, allowing pairing of two devices simultaneously. This makes changing between bluetooth audio sources to be much simpler as compared to another device which is not equipped with this feature.

We had no issues with the Logitech Bluetooth Audio Adapter and thought that it was a well designed product. It should be able to fit into the design of most living rooms, speaker system setup and environments. The only downside was its 15 meters line of sight range, which could be deemed as too short or perhaps even unreachable for certain usage scenarios. It is recommended that one does his homework thoroughly before purchasing the Logitech Bluetooth Audio Adapter, just to make sure that the product will work for his setup, due to the limitations in transmit distance.

Review of GP PowerBank Mobile Charger : It's all about Safety and Reliability