Battlefield 1 is Coming in October 2016
Battlefield 1 will be released to the world on October 21, 2016 for Xbox One, Origin on PC, and PlayStation 4.
You look into the distance and see planes torn apart by gunfire, their debris raining down over London. In war-torn France to the east, horrible armored tanks tear holes in walls as they roll through crumbling cities. To the south, past the burning Italian coast, men charge over the sand dunes of the Arabian Desert, armed to the teeth with the most powerful weaponry the world has ever seen. This is what the dawn of all-out war looks like, and it’s Only in Battlefield 1.
Battlefield 1 is releasing worldwide on October 21, 2016 for Xbox One, Origin on PC, and PlayStation 4 but you’ll be able to get your hands on it much sooner. More on that in a minute.
With Battlefield 1 we set out to create some of the largest, most dynamic battles in FPS history while continuing to tap into what fans love most about the franchise. One of the things that makes World War I such an amazing era is just how advanced it really was. Almost everything that you know about the conflicts of the next century, from the massive battles across land, air and sea, to the powerful and efficient weaponry, is there. Tanks, planes, machine guns, artillery – a lot of the tech you’ve used in other Battlefield games was perfected during this era, letting the classic Battlefield DNA shine through.
You’ll be able to join in massive 64-player battles and experience unexpected Only in Battlefield moments in a setting where the old world was destroyed, giving way to the new one. We’re turning destruction up a few notches too, so expect some surprises when you hit the battlefield. front lines
If you’re eager to go hands-on with Battlefield 1 you won’t have to wait too long. During the EA Play events on June 12 in Los Angeles and London, we’ll reveal the first gameplay footage and let attendees try the game for themselves. Register and make your way to those events, and you’ll be able to play the game before pretty much anyone else.
EA Play won’t be your only opportunity to play before release, though. There will be more chances in the months that follow, including an Open Beta (which you can get into a little earlier if you sign up for Battlefield Insider). EA Access and Origin Access members will be able to play for a limited time before the release date, too. And if you pre-order the Early Enlister Deluxe Edition, you’ll be able to start playing on October 18, three days before the release date.
Excited? So are we. We’ll have a lot more information in the coming weeks. In the meantime, circle the date on your calendar: Battlefield 1 is releasing on October 21 for Xbox One, Origin on PC, and PlayStation 4.
Battlefield™ 1 Early Enlister Deluxe Edition 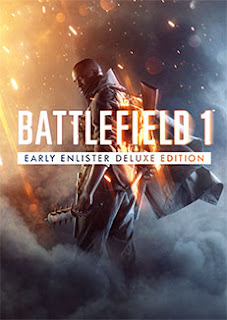 PRE-ORDER FOR XBOX One OR PS4 OR ORIGIN

Discover a new world at war through an adventure-filled campaign, or join in epic multiplayer battles with up to 64 players. Adapt your tactics and strategy to the earth-shattering, dynamic environments and destruction.
Be the first on front lines – snag the Early Enlister Deluxe Edition today and get the Hellfighter, Red Baron, and Lawrence of Arabia packs full of themed weapons and gear; five extra Battlepacks stuffed with great items; and access to the full game on October 18, three days before release.

Fight your way through epic battles going from tight urban combat in a besieged French city to big open spaces in the Italian Alps or frantic combats in the Arabic sand dunes. Experience large-scale battles as infantry or piloting vehicles on land, air and sea, from the tanks and bikes on the ground, to bi-planes and gigantic battleships.

Discover a new world at war through an adventure-filled campaign, or join in epic multiplayer battles with up to 64 players. Adapt your tactics and strategy to the earth-shattering, dynamic environments and destruction.