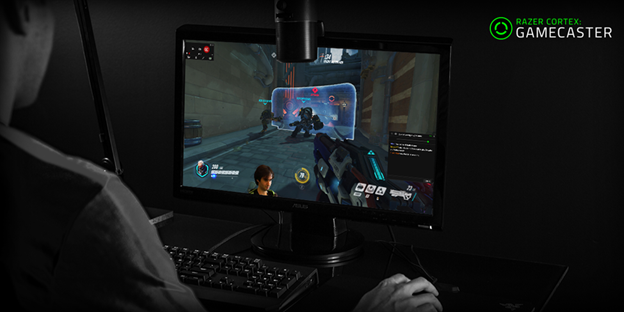 All essential gamecasting tools and settings are available in-game through an unobtrusive on-screen overlay that hides out of view when not used. Quick access hotkey combinations allow gamers to launch their stream, record gameplay locally, toggle their webcam or save a screenshot without ever losing focus from the game.
Razer Cortex: Gamecaster automatically optimizes streaming settings to match PC setup and internet connection for minimal performance impact. Streamers are also able to configure settings manually to adjust broadcast quality to their own preference.
Ten-thousand closed beta testers helped create an efficient user experience that allows gamers to broadcast gameplay in as little as four steps.
“After an extensive beta with insightful feedback from our users, we’re confident that Razer Cortex: Gamecaster is the most intuitive broadcasting software in the market,” says Min-Liang Tan, Razer co-founder and CEO. “We had more than a few gamers praise our work on producing an easy streaming software solution and their help was instrumental to get Gamecaster to that point.”
There are two versions of Razer Cortex: Gamecaster. Each are available within the Razer Cortex software, which now has more than 11 million users. With the free version of Razer Cortex: Gamecaster, gamers are able to broadcast footage without watermarks at resolutions of up to 720p. Streaming above 720p is also available to free users with a discrete Razer watermark appearing on their broadcast.
By activating a paid Pro license, users gain access to advanced premium features. Higher quality and lower impact streaming with the x264 codec, on-screen annotations and Twitch chat tools are offered to Pro users.
Razer Cortex: Gamecaster Pro subscriptions will be sold in 3 and 12 month licenses. For more information, and to download Razer Cortex for free, visit http://www.razerzone.com/cortex. 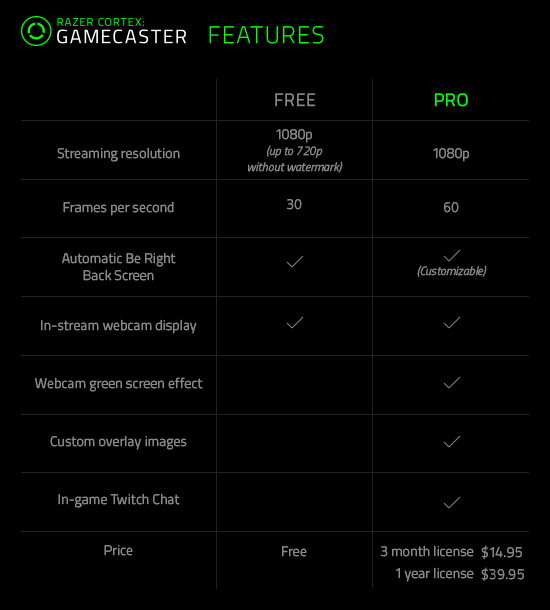 About Razer Cortex
Razer Cortex is a free performance enhancing game launcher that acts as the nerve center of a player’s entire gaming experience. With Razer Cortex, users can easily discover new games at their lowest prices, boost the gaming performance of their PCs, back up saved games to the cloud and record in-game footage.
Razer Cortex software includes the below features:
·         Deals – Pay less for more of your favorite games with a price comparison engine that lets you know of price drops, sweet deals and promotions on the web’s top digital stores. Available on Razer Cortex, online at deals.razerzone.com and on iOS and Android mobile devices:
·         Boost – Enhance your PC’s gaming performance with the popular boosting utilities from Razer Game Booster incorporated into Razer Cortex.
·         Save Game Manager – Automatically back up save games to the cloud and never lose a save game again.
·         Gamecaster – Live broadcast your gameplay to the top gaming networks with the press of a single button.
For more information on Razer Cortex and its array of features, please visit: www.razerzone.com/cortex/

Be that person who defines the future, not a victim of it