eFOLDi is about to change how we travel... forever - The Tech Revolutionist

eFOLDi is about to change how we travel… forever

Home » eFOLDi is about to change how we travel… forever

eFOLDi is about to change how we travel… forever
Chinese Circus Engineer Jianmin Wang has created the next generation electric urban transport, literally by accident.
eFOLDi is a unique award winning foldaway electric scooter designed by a circus engineer and set to change the way we travel. 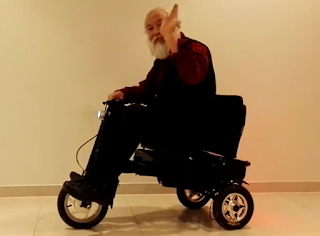 YouTube link: https://youtu.be/nrvuDkWnxOA
eFOLDi can be easily folded to a chair to rest on and to a suitcase for easy storage! It is the brainchild of Jianmin Wang, who worked as engineer with the Chinese Acrobatic Circus for over over 20 years. As the award winning engineer behind some of the most jaw dropping effects and stunts in the world, it was Jianmin’s job to defy the laws of physics on a daily basis and as you might expect his newest creation eFOLDi is rather special. The scooter, which weighs just 17 kilograms and yet can carry a full size adult for over 30 kilometers on a single charge is set to revolutionise the way we travel. Jianmin came up with idea after he broke his leg. The eccentric Chinese maker, famed for his outlandish inventions, decided he wasn’t going to make a fuss and simply got in his workshop and solved the problem by coming up with eFOLDi.
The design is already making waves in the gadget market having won the gold medal at Invention Competition in Beijing, China the grand prize at last year’s Surrey Entrepreneur Academy on Thursday 19 November 2015. The five thousand pound prize from Reigate & Banstead Borough Council, in partnership with East Surrey College was awarded to protect the scooter’s patent, which has now been granted internationally. SunTech UK, the company behind eFOLDi, is set for a very exciting 2016 and is about to launch a crowdfunding campaign to bring the electric vehicle to the world, although SunTech’s CEO Sumi Wang hasn’t ruled out more traditional roads to market.
“It’s too early to mention really,” said Sumi Wang,” but we are currently in discussion with a well known international electronics corporation and they have shown strong interest in further developing eFOLDi product range.”
eFoldi has also picked up the backing of University of Surrey. Their Business School is selecting eFOLDi as this year’s topic for their MSc students. The students are working closely with SunTech to develop business plans and crowdfunding strategies. Jim Sears, Senior Lecturer of Business School invited SunTech’s CEO Sumi Wang to his master class to give presentations to his students about eFOLDi, and to be a judge for his students’ Dragonfly-Den style competition where students were asked to pitch eFOLDi marketing strategies. Jim has also helped establish collaborations with the Engineering School of the University, for next generation of eFOLDi. Jim commented “This is a great crowdfunding idea! UK crowds should be excited about this innovative pre-commerce opportunity!”