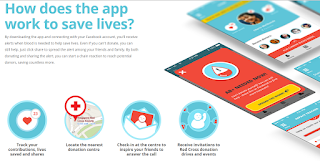 Singapore, 25 November 2015 – Leveraging social media to amplify its donor recruitment effort, the Singapore Red Cross (SRC) today unveiled its enhanced mobile-app, Red Cross Connection, that will both crowdsource blood donation and recruit new youth donors. Singapore needs 316 units of blood each day which adds up to over 120,000 units annually. With a fast ageing population, blood needs will continue to increase.
With the app’s new social-media friendly features, users can share information at the touch of a button and get real-time updates through its new feature – the ‘Impact Tracker’, which indicates the nation’s monthly blood demands and how many more donors are needed. The app also sends alerts which users can share via social media platforms such as Facebook and Twitter in the event of low blood stocks during emergency situations or when a special blood type is needed urgently.
In addition, the app has quick facts and myth-busters to debunk common misconceptions about donating blood.
It also boasts gamification features that include leveling up through points system earned through various methods to increase interaction among youth and their peers.
A study by Singapore Polytechnic shows that 80% of Singaporeans youths who go online daily are connected on social media platforms and are most likely (79%) to share content with their friends. Nearly 30% according to the study use social media to promote a cause of interest.
“Leveraging today’s hyper-connected world, we enhanced our mobile-app to encourage social conversations on blood donation, in hope that more youth will come forward to give this lifesaving gift to those in need,” said Mr Benjamin William, SRC’s Secretary General, while urging more youth to download the mobile-app.
The enhanced Red Cross Connection was introduced at a blood drive in Singapore Polytechnic today. Helping to champion this worthy cause are popular local YouTubers, Tree Potatoes, who shared, “As blood donors ourselves, we are constantly encouraging our fans to do their part to save lives. We hope to inspire them to embrace blood donation as an integral part of their lifestyle, and to use this cool mobile-app to highlight the benefits of blood donation among their friends.”
One unit of blood saves 3 lives
It is estimated that the number of blood donations required will increase two-fold by 2030 to meet future blood demands which has been increasing yearly.
Youth donors make up a significant part of the blood donor pool in Singapore. In 2014, 30% of all blood donors are youth and the SRC hopes to increase it to 35% by 2020.
One such youth is Wong Jun Sheng, 24, whose younger brother Wong Jun Da, suffered from leukaemia when he was younger. Jun Sheng recalled, “It was really hard watching my brother struggle with leukaemia when we were growing up. Thankfully, my brother’s life was saved by the many blood donations and transfusions he received. Today, I’m a regular blood donor because I could be helping someone else’s brother live.”
Both brothers are part of SRC’s new campaign to advocate on the importance of donating blood and the call for more people to download the app. They shared that the enhanced mobile-app allows for them to easily reach out to their friends by using the social sharing functions.
Since the launch of the mobile-app in 2013, over 17,000 people have downloaded the app. SRC hopes to raise awareness of the need for blood donations through the app. Even if app users can’t donate blood, they can spread the word so that those who are able to will step forward to give. The Red Cross Connection app is available for free download for iOS and Android users.
To drive greater awareness and participation, Singapore Red Cross is also taking its integrated, social media campaign offline through digital play panels. These panels will display ads featuring updates from the ‘Impact Tracker’, Singapore’s current blood needs and also showcase the newest “lifesavers” or people who have installed the app. The panels will be placed across 30 locations in Singapore such as Orchard Road and the Central Business District from the first week of December along with an appeal to download the app.