A Selfie is a photograph that one has taken of oneself, typically one taken with a smartphone or webcam and shared via social media. There has been an increasing number of the population taking selfies, and the usual smartphone’s front camera just aren’t good enough to capture high quality photos. ASUS has decided to put a stop to blur and low quality images captured by the front camera. This is why, they have just recently introduced the brand new ASUS Zenfone Selfie for the Singapore market, which boasts 13 Megapixel front facing camera. 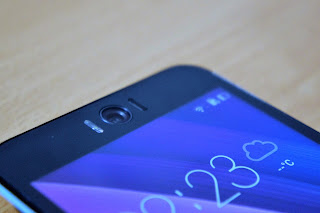 The ASUS Zenfone Selfie stands out from every other smartphones out in the market because of its superior front facing camera. The phone boasts a 13MP front facing camera with dual-LED flash. To allow the front camera to produce natural pictures even with flash on, the dual-LED for the front camera works to provide dual tone configurations. Of course, ASUS did not scrimp on the rear camera. They have an identical 13MP rear camera as well.

Most definitely, the ASUS Zenfone Selfie is not only defined by its good photo taking capabilities. The phone is equipped to perform well with its efficient and moderately good computational hardware. Zenfone Selfie runs on a Qualcomm Snapdragon 615 chipset with a dual quad-core A53 CPU. One runs on 1.7GHz while the other at 1.0GHz. This enables the whole processing unit to efficiently switch between processors depending on performance requirements in order to extend its battery life. The phone comes in either 2GB or 3GB of RAM, and buyers also have a choice between 16GB or 32GB of internal flash storage. We were glad to see that ASUS has also integrated a microSD external storage card slot to expand the overall media storage capacity up to 128GB.

Zenfone Selfie’s battery can actually be removed, unlike ASUS’s flagship Zenfone 2 Smartphones. This allows maintenance and replacement of battery to be done fairly easily, and most certainly extend the phone’s operational time, if users were to have a spare battery with them. The considerably high capacity Li-Po 3000 mAh battery is sure to last a whole day on a single charge. 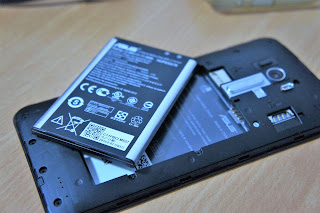 In terms of connectivity, Zenfone Selfie is in fact a dual-SIM smartphone that supports most of the 4G Networks available in the world. This makes the Zenfone Selfie a perfect phone to bring overseas, especially if you are travelling alone. The combination of its dual-SIM features and great front facing camera, the phone is going capture the finest moments of your holiday overseas. This is supplemented by the availability of A-GPS and GLONASS built into the phone which guides you around the new city. The phone is also able to connect to ultrafast 802.11ac wireless hotspots that promises speeds of over 300Mbps or higher (depending on the the transmitter), and the latest bluetooth 4.0 technology, covering all areas of wireless data transfer. 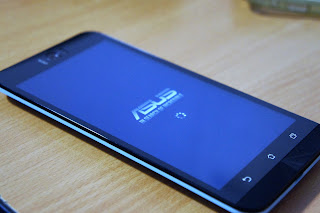 Put away the thought owning a smartphone with a low display resolution The 1920 x 1080 FullHD display that is on the Zenfone 2 Selfie is going to blow your mind away. Movies and other videos are going to seem so much clearer on the display of the Zenfone 2 Selfie. The shiny Corning Gorilla Glass 4 with oleophobic(oil proof) coating, is not only going to give you a better overall entertainment experience, but also longevity and reliability to the smartphone.

The ASUS Zenfone Selfie is available in White, Pink and Blue. The only difference is the colour difference in its rear cover. This means that users can simply customize and purchase another preferred rear cover and replace the current cover. 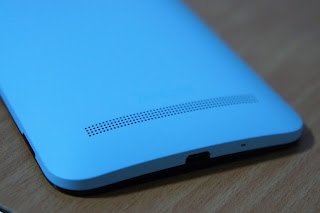 The front 13 Megapixel camera does take up some space at the top part of the phone, resulting it to be longer than the Zenfone 2. This also means that accessories for the Zenfone 2 will NOT be compatible with Zenfone Selfie, despite them being in the same Zenfone product series. To the left of the front camera is the dual tone LED flash. 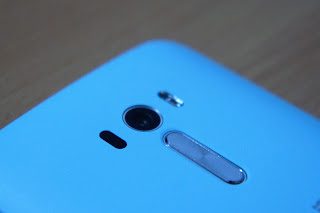 ASUS has also integrated a laser autofocus feature in the Zenfone Selfie. There is a small laser emitter that is placed to the left of the camera lens which shoots out laser to determine the distance of the capture object. This allows the phone to very quickly adapt and focus onto the object. This is also why the ASUS Zenfone Selfie can focus on any object very quickly.
At the bottom of the front, there are 3 capacitive buttons. ASUS usually has got their back button placed on the left side of the phone instead of the right, and some Samsung or other brand users may require getting to the new placement. Opposite the back button is the task button, which is fairly common in most Android smartphones out in the market now. 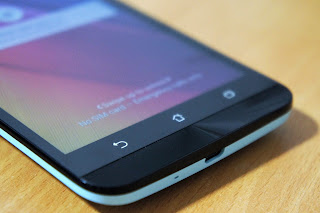 The 5.5 inch display does not make the phone too big as ASUS has trimmed down the bezels to the bare minimum possible. This also gives the whole phone a very refined and classy feel, as opposed to older smartphones with thick and ugly bezels.
The back of the smartphone is also curved. This design allows the speakers not to be placed directly on any flat surface, so that sounds can bounce off and reflect into the user’s ears. Moreover, the curved back allows a better grip on the phone, enhancing the over user experience. The seemingly poly carbonate material used for the rear cover also ensures that the phone is durable. This non-shiny material gives the phone a very chic look and is most definitely be loved by young girls. 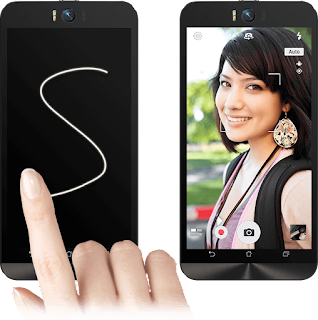 If you fancy LG’s double tap to wake features, the Zenfone Selfie will like to excite you with even more from such gestures. Zenfone Selfie brings convenience to a whole new level. In addition to the double tap to wake/sleep, you can even draw an “S” on the screen when the phone is in sleep, and the the front camera app will open, allowing you to quickly take a Selfie. If you draw a “C”, the rear camera will open instead. Surprisingly unique and intuitive!

The front camera performance is apparent. No other front facing camera from any other smartphone can take images as clear and high quality as the Zenfone Selfie. Even in low light, Zenfone Selfie was able to capture much more light than the Zenfone 2, without the use of flash.
Test 2 : Rear Camera

Test 3 : Benchmarks
Based on the benchmark tests, it seems that the Zenfone Selfie performance well. It is similar in terms of computational and gaming performance to any other mainstream smartphone of its class in the market. The Zenfone Selfie should be able to perform any kind of the usual smartphone social tasks and play most games efficiently without much lag. 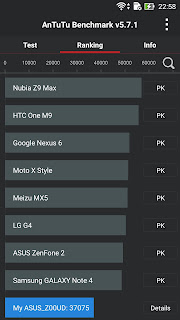 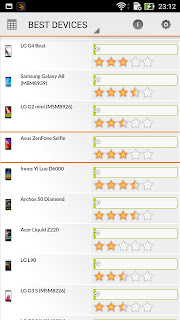 Moreover, the phone temperature remained fairly low even when running games. The phone was recorded to be at 40 degrees at its hottest. 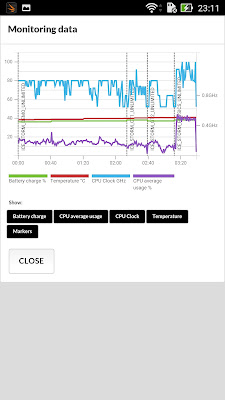 Time after time, on every single review of a ASUS Smartphone product, I will want to bring across the point to ASUS that they should not preinstall unwanted applications on their smartphones. Just like any of their previous smartphones, the Zenfone Selfie has got unneeded/ non-essential applications that are pre-installed. These include apps like Clean Master, Zinio, TripAdvisor, Amazon Kindle, Omlet Chat, Puffin Free etc. These applications takes up additional storage space and resources to the phone and could result in a slower phone experience. 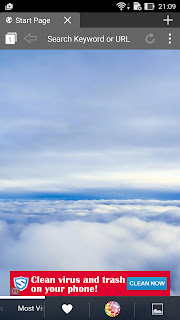 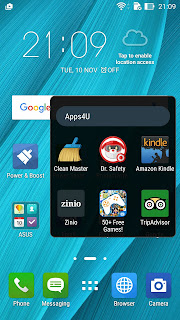 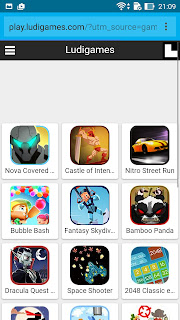 Some applications even had advertisement found within them. It would definitely be better to uninstall such applications if you are not utilizing them at all. 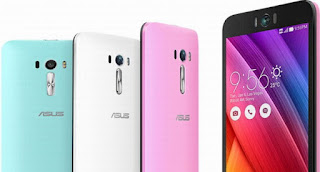 The ASUS Zenfone Selfie is a promising smartphone to own. This phone is going to appeal to the mainstream users who are looking at the best features and hardware at this affordable and reasonable price point. Moreover, with the availability of it in White, Pink and Light Blue colours, we are sure that the Zenfone Selfie is going to be a hit with young girls in the population. In terms of its performance, ASUS has equipped the phone with adequate hardware and there were no major lags or stutters when using the phone. 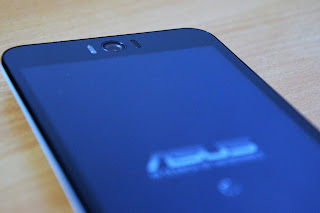