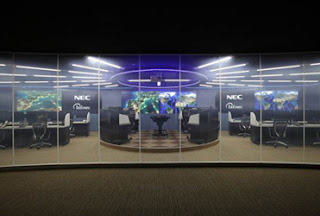 Jakarta, Indonesia, 22nd September 2015 – NEC Corporation (NEC; TSE: 6701) today announced the signing of a Memorandum of Understanding (MOU) with the Indonesia Security Incident Response Team on Internet Infrastructure Coordination Center (Id-SIRTII/CC) in order to collaborate in the area of cyber security in Indonesia.
The Id-SIRTII/CC is an agency under the Indonesian Ministry of Communication & Information Technology, and is responsible for creating a secure environment for Internet-based communications within the country.
Under this MoU, NEC will work in collaboration with the Id-SIRTII/CC in designing a reference model for a Security Operation Center (SOC) that meets requirements for government agencies in Indonesia, as well as a detailed human resources development plan for the SOC’s operations.
In addition, NEC and the Id-SIRTII/CC will study the possibilities of collaborating in the development of counter measures against increasing threats of cyberattacks in Indonesia by utilizing security intelligence information held by the Id-SIRTII/CC.
In 2014, NEC established the “Cyber Security Factory” in Japan as a specialized organization dedicated to countering cyber threats and attacks. The Cyber Security Factory’s SOC capabilities include round-the-clock security surveillance of customers’ networks and websites, human resource development for training qualified security professionals, and a cyber-intelligence function for analysis of cyber-attacks.
Also, NEC signed a partnership agreement with INTERPOL in December 2012. Under this agreement, NEC has completed the delivery of core technical elements of the INTERPOL Digital Crime Centre, which was established within the INTERPOL Global Complex for Innovation (IGCI) in Singapore in April 2015.
“In Indonesia, we have seen rapidly increasing demand from both public and private sectors to protect information assets through the introduction and operation of measures against cyber-attacks,” said Rudi Lumanto, Executive Board], Id-SIRTII/CC. “We firmly believe that NEC, with their extensive expertise in the cyber security arena, will play a leading role in supporting our efforts to establish and operate a country-level security operation center.”
“We regard the signing of this MoU as recognition by the Id-SIRTII/CC of our extensive track record in constructing and operating SOCs, including our contributions to the INTERPOL Digital Crime Centre,” said Hiroyuki Nagano, General Manager, National Security Solutions Division, NEC Corporation. “In order to cope with increasingly complex and sophisticated cyberattacks, it is critically important to share cyber intelligence information among organizations that are working on cyberattack countermeasures. Through this collaboration with the Id-SIRTII/CC, an integral part of Indonesia’s cyber security intelligence strategy, NEC is reinforcing its commitment to contributing to the creation of a safer and more reliable cyber space both for Japan and Indonesia.”