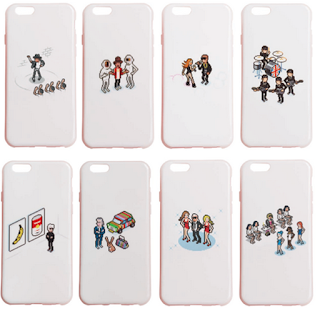 (July 2015, Singapore) – Lamch & Co introduces the Koala Kicks “Celebrity Series” iPhone case designed by eBoy, a pixel art group from Berlin. Established in 2013, the Japanese lifestyle brand Koala Kicks is known for their trademark “pink and cool humor” and collaborative works with artists from around the world.
This summer, Koala Kicks teams up with eBoy on a series of iPhone cases for iPhone 6 and 6 plus.  Founded in 1997 by Kai Vermehr, Steffen Sauerteig and Svend Smital, eBoy reinterprets into digital art, in the form of pixelated cartoons, iconic images of well known icons from Hollywood stars, pop idols and fashion moguls such as The Beatles, Beyonce and Jay Z, Bruno Mars, Michael Jackson, Andy Warhol, Paul Smith, Karl Lagerfeld and Anna Wintour.
Available in mid-July at ante at Tangs@Tangs Plaza Level 3, ante@Suntec City and INHABIT – The Other Store, the cases retail at $55 for iPhone 6 and $59 for iPhone 6 Plus.