CYBERBULLYING A KEY AGENDA FOR YOUTH AT CAMPUS GAME FEST 2015

CYBERBULLYING A KEY AGENDA FOR YOUTH AT CAMPUS GAME FEST 2015
·      SCOGA collaborates with Singapore Kindness Movement to showcase pledges by students from 20 secondary schools to act graciously on the Internet, as part of #BuddyNotBullySG campaign
·      3 Singapore youth awarded for best pledges against cyber bullying 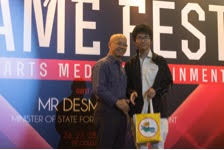 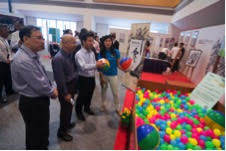 [Left] Dr. William Wan, General Secretary of Singapore Kindness Movement presenting an award to a student who pledged against cyber-bullying as part of the #BuddyNotBullySG campaign at Campus GAME Fest 2015
[Right] Mr Desmond Lee, Minister of State for National Development at the Singapore Kindness Movement’s Seed Kindness Fund’s ‘Take a Seat, Create a Seed’ booth
SINGAPORE, 30 June 2015 – The Singapore CyberSports and Online Gaming Association (SCOGA) and the Singapore Kindness Movement (SKM) awarded three students who have pledged against cyber bullying at Campus GAME Fest, the biggest local youth-led event in Singapore.
#BuddyNotBullySG is one of the key initiatives by the SKM aimed at empowering youths to step in and stand up when they witness or are the victims of cyber-bullying. During school assembly talks delivered by SCOGA, students came together and pledged to themselves and to one another that bullying will no longer be tolerated. They pledged to become a buddy and committed to pledge tasks such as designing an anti-bullying ribbon, creating a poster to put up on social media and creating other materials to express and share their understanding of gracious online behaviour.
Three students with the most creative and original pledge tasks were selected and presented with an award of being a buddy and not a bully at Campus GAME Fest on Friday, 26th June. Creative pledges by students from 20 secondary schools were also showcased at the event, which attracted over 12,000 youths from 26th to 28th June.
Partnering with the SKM on this campaign, SCOGA introduced the #BuddyNotBullySG campaign to youth who attended the three-day event, to raise awareness of cyber-wellness among youth. Students are encouraged to take their pledges further to activate their schools to pledge against cyber-bullying, and make a collaborative change in the community through SKM’s Seed Kindness Fund.
Campus GAME Fest is spearheaded by SCOGA and ITE. The event aims to promote creativity, innovation, digital entertainment and cultivating cyber wellness through CGF 2015 via an educative and fun lifestyle approach for the youth, focusing on their areas of interest – Games, Arts, Media and Edutainment. The entire event was organised and executed by around 200 youth volunteers, who developed a host of innovations and exciting activities over three days.
Additionally, for a different way of engaging online gamers, the SCOGA Boot Camp was held in conjunction with Campus GAME Fest. This training programme helped youth to pick up effective life skills such as communication, leadership, making decisions under pressure, social interaction and teamwork, through playing the games that they love.
Campus GAME Fest also provided an opportunity for students from ITE College Central to engage and strengthen bonds with 60 Pioneer Generation elderly from Thye Hua Kwan senior activity centres through a fun game of Fruit Ninja.