‘FOR YOUTH, BY YOUTH’ – SAY HELLO TO CAMPUS GAME FEST 2015, THE COOLEST YOUTH ENGAGEMENT PLATFORM IN SINGAPORE
Over 12,000 youth set to attend three-day Campus GAME Fest 2015 and showcase their talents in Gaming, Arts, Media and Edutainment in the biggest local youth-led event 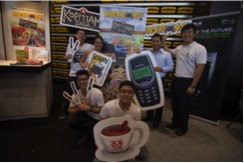 SINGAPORE, 26 June 2015 – Today marked the launch of Campus GAME Fest 2015 [GAME stands for Game, Arts, Media, Edutainment], an initiative spearheaded and organised by the Singapore CyberSports & Online Gaming Association (SCOGA) and Institute of Technical Education (ITE) and produced by Wolong Ventures.
Mr. Desmond Lee, Minister of State, Ministry of National Development officiated at the launch Ceremony this morning. Campus GAME Fest 2015 (CGF 2015) will showcase a host of innovations and exciting activities taking place over the next three days for some 12,000 youth, making it one of the biggest local youth-led events in Singapore. The event has engaged over 200 youth volunteers from the community, allowing them to take leadership in planning activities for thousands of fellow youth attendees.
Supported by the National Youth Council (NYC) and Media Development Authority of Singapore (MDA), SCOGA and ITE are promoting creativity, innovation, digital entertainment and cultivating cyber wellness through CGF 2015 via an educative and fun lifestyle approach for the youth, focusing on their areas of interest – Games, Arts, Media and Edutainment. Into its third year, the event’s success has made it an integral part of the student calendar.
“Many organisations in Singapore find it challenging to understand and engage youths who take to the Internet and new technologies like fish to water,” said Mr Nicholas Aaron Khoo, Chairman and co-founder of SCOGA. “Youths today are hyper connected through digital platforms and seeking to express themselves, pick up new skills and meet like-minded youths through communities that may not be so conventional. Campus GAME Fest has evolved to become a strong community platform for learning, youth expression, and showcase of skills, almost like a modern version of a neighbourhood block party, one fun enough to attract thousands of youths.”
Some of the key highlights for CGF 2015 are:
·       Engaging Pioneer Generation Through Technology: Over the past month, 50 students from ITE College Central have visited the Lion Befrienders and Thye Hua Kwan senior activity centres in the neighbourhood. Students shared mobile games like Fruit Ninja, a game that not only keeps the mind active, but also has been used in therapy to help stroke patients in their recovery. From the senior activity centres, 50 pioneer generation elders will experience Campus GAME Fest while engaging with youth volunteers.
·       National Education Gaming Championship (NEGC): Now in its 5th edition, the National Education Gaming Championship (NEGC) is an inter-school gaming competition for youths to discover the 3rd Generation Singapore Armed Forces (SAF) in a fun and engaging way. Through the training and game days, participants are given the chance to apply teamwork skills, develop a healthy competitive spirit and learn that fulfilling individual roles are key factors in winning the game. NEGC is a positive platform for students to make new friends with similar interests while taking a break from schoolwork during the holiday period. A record number of 60 schools will be participating in the championship.
·       Launch of SG50 Games: In celebration of Singapore’s 50th birthday, five local game developers have created mobile games inspired by Singapore’s culture, heritage and unique identity. Supported by the MDA, the five games, Building the Lion, KAN-CHEONG! Kopitiam Saga, My Singapore City, Rickshaw Rush and Satay Club, will be officially launched at Campus GAME Fest and available for free public download on Apple and Google App Stores. More information on the SG50 games can be found on its official website, www.sg50games.sg.
In addiiton, students from ITE have also created special games, which will also make their debut at the Festival.
·       Bring-Your-Own-Computer LAN Party – Just Play!: Just Play! is the biggest Bring-Your-Own-Computer (BYOC) LAN Party in Singapore, where over 1,000 attendees are expected to gather for epic video gaming fun in the camaraderie of a camping environment. Participants will be spending some quality time with friends and new gamers they meet at this event and take part in exciting activities such as faction wars, mini tournaments and offline activities such as gun tag battles and street soccer, with prizes to be won throughout the night.
·       “BuddyNotBullySG” cyber wellness campaign: SCOGA has also partnered with the Singapore Kindness Movement to introduce the cyber wellness campaign to students in 20 Secondary Schools island-wide. “BuddyNotBullySG” is a campaign that encourages secondary school students to take action by pledging to act graciously on the Internet. Students were also encouraged to create collaterals to express and share their understanding gracious online behaviour. Works from over 20 different schools will be showcased at CGF 2015. A prize giving ceremony for the best three selected pledges will be held at the event.
·       SG50 Comic Art Exhibition: In partnership with the Comic Society of Singapore, 50 local comic artists will exhibit their original works at CGF 2015. Majority of the artists are young aspiring artists who have shown great creativity and artistic potential. 12 of these artists will showcase their illustrations from the recently launched SG50 Commemorative Comic “Our Months Together”, which comprises of 12 short stories in different art styles, with each artist taking the readers through significant milestones and achievements of Singapore. Limited copies of this collaborative comic anthology will be given out at CGF 2015.
·       Workshops and Keynote speeches: Over the 3-day event a number of industry and youth influencers across gaming, arts, media and edutainment will be sharing their knowledge with youth audiences. Speakers include Aaron Khoo, Founder of Tree Potatoes, Tan Hui Tian, Game artist and award-winning designer and Louis Lin, MSI Notebook SEA Region Marketing Manager.
·       Live Streaming: Thousands of gamers are anticipated to watch live commentary on games and events happening on stage and around the event hall. For live streaming, please visit: www.youtube.com/campusgamefest