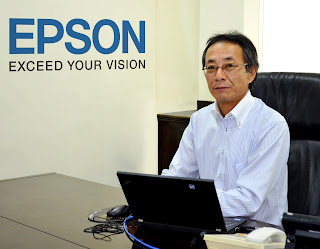 Seiko Epson Corporation (SEC) shared that the appointment is in line with its aim to establish a management structure to fulfill its goals as it enters the final year of both its SE15 Corporate Vision and the second half of its SE15 Mid-Range Business Plan, and to help it expedite management decisions based on maximizing corporate value and ensuring good corporate governance.
Mr. Tanaka joined SEC’s System Devices Sales and Marketing Department in April 1981, after graduating from Waseda University with a degree in Bachelor in Economics. From 1997 to 2003, Mr. Tanaka was relocated to Epson’s South and Southeast Asia regional headquarters in Singapore to lead regional sales initiatives as the Sales Director for System Devices & Projector. During that period, Mr. Tanaka’s milestone achievements included securing a high value Ministry of Education tender project in Malaysia in 2002 which entailed 20,000 units of projectors for classrooms.
Mr. Tanaka returned to the SEC global headquarters in Japan in 2003 to oversee the Business Systems in the Sales & Marketing Department. After a year, he was promoted to General Manager, where he was instrumental in driving sales for the business products globally. In 2007, he was appointed as General Manager for the Imaging Products Sales & Marketing Support Department.
In July 2012, Mr. Tanaka was appointed as the head of Epson Philippines. As Country Manager of EPC, Mr. Tanaka strengthened the Epson brand, created new business models to fit the local requirement, and led the company in achieving market share and value share leadership in the inkjet printer, projectors, and business systems categories.
Mr. Tanaka’s 34-year tenure with SEC and its affiliate companies, as well as his in-depth knowledge in the field of economics, served as valuable assets to many accomplishments during his various assignments. He is married with two children, and enjoys golf, baseball, and skiing.

Newstead Technologies is the Official IT Partner at Garena Carnival 2015