If you live in mainland China, the brand OPPO may not be a unfamiliar name for you. Like many Chinese manufacturers, OPPO has been working hard for their expansion outside their own country. Unlike Xiaomi who gains attention by affordable phones sold by flash sales, OPPO truly focuses on the quality and innovation of their products.
The OPPO N3 is the revision to the OPPO N1 which was already very popular in China. Of course, OPPO N3 promises better specifications, performance, as well as even newer and cooler features as compared to its predecessor. In fact, we were told that the first 10,000 sets of the N3 were snatched wiped out in the matter of 9 minutes from JD.com (China’s online retailer).

OPPO N3 is the top of the line smartphone. Comparing to the other flagship smartphones from well renowned brands like LG, HTC and Samsung, the OPPO N3 able to hold its position within them. Other than brand recognition in the market, we know that OPPO N3 is a solid phone that is equipped with specifications that puts it at the top of the charts. 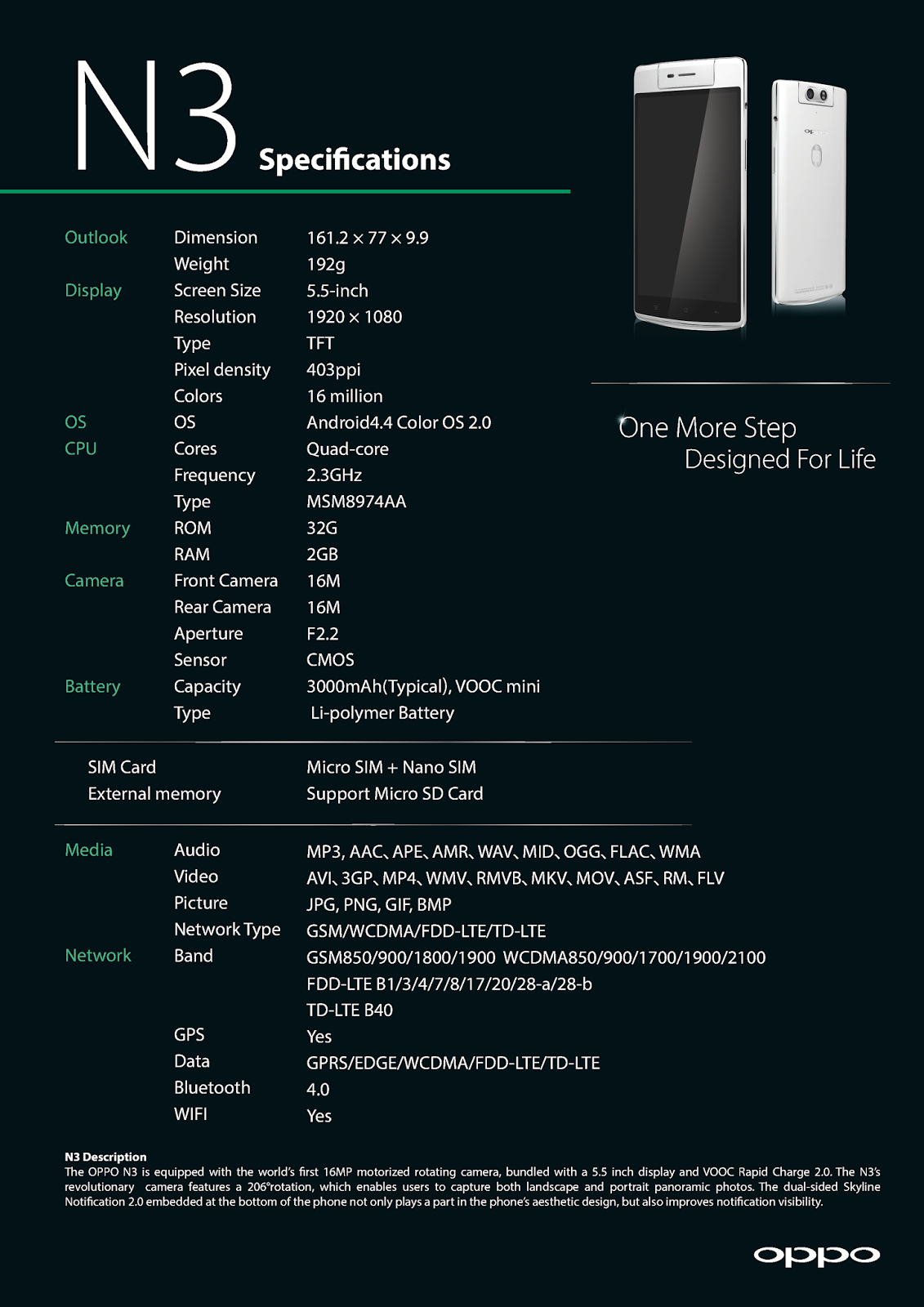 Armed with a Qualcomm Snapdragon 801 quad core processor, the OPPO N3 is ready to take on any challenges that it is thrown with. It will handle 3D games and computing intensive applications without much sweat. Its Full HD 1920 x 1080 resolution screen is also a highlight of the product, which gives users an unparalleled viewing experience. In terms of connectivity, OPPO N3 has got the latest and greatest LTE support and even 802.11AC Wireless Technology built in. A 3000mAh battery also promises full day battery life.
Of course, all these specifications mean nothing when we don’t show you some real life usage examples. In the next portion of the article, we will focus on the aesthetic aspect of the phone, as well as various unique features that makes this smartphone one of a kind. 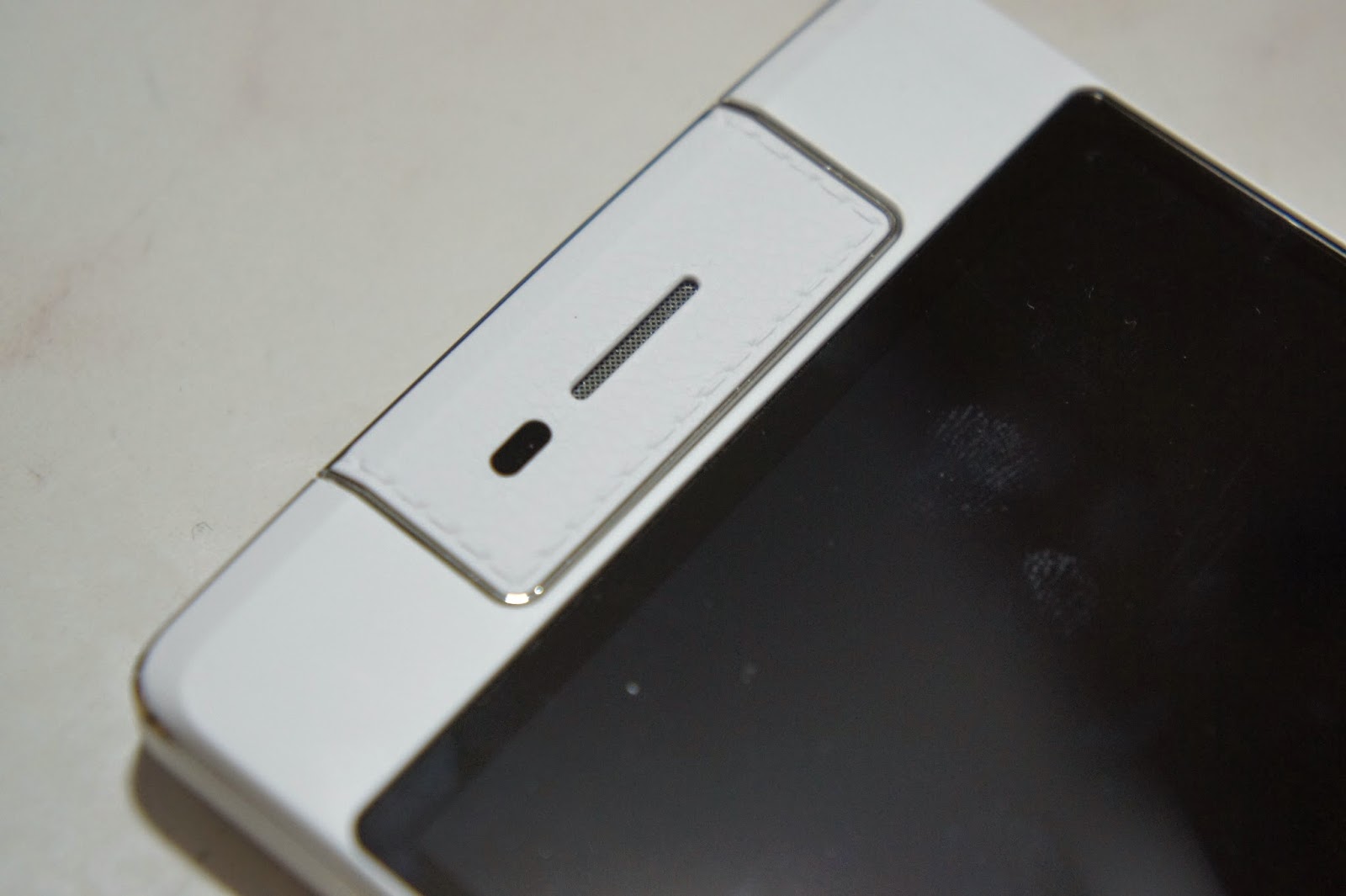 The OPPO N3 device caught our attention when it was removed from its exquisite packaging. Its white gave it a chic and classy look, making it suitable for both males and female users. I had to give the camera section of the phone a closer look after realising what it was made of. We found out that OPPO integrated material design into the overall design of the phone. The camera section is actually made of a faux leather finish, refining the whole smartphone design aesthetically. 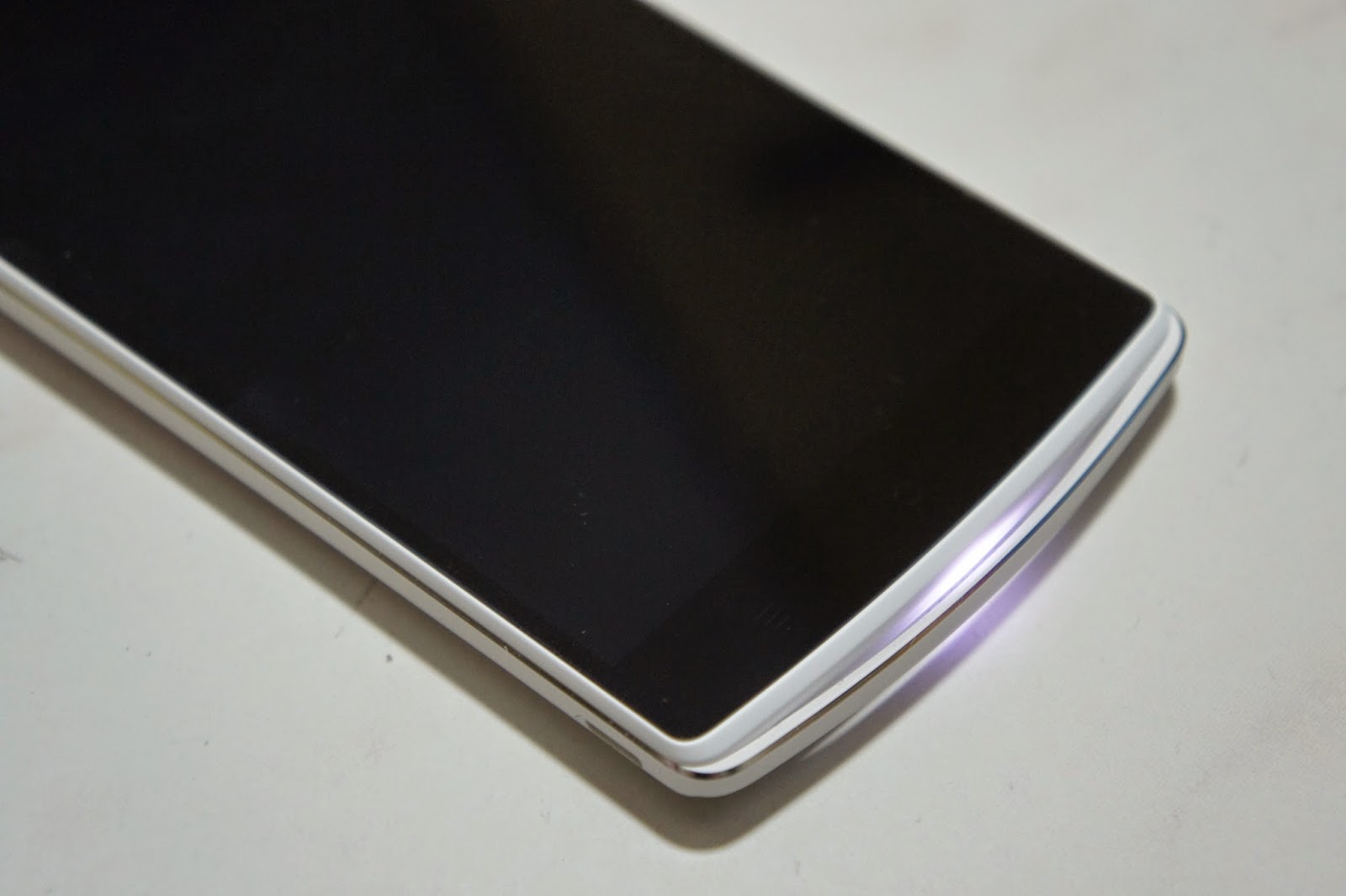 Instead of a usual LED light that comes out from no where as the phone’s notification indicator, OPPO has cleverly infused the coloured LED to the body of the phone. A small piece of transparent glass as introduced and placed at the bottom part of the phone. By doing this, OPPO has indeed achieved an one and only design that no other manufacturers can replicate. ‘Elegance’ should be the right word to describe this unique design. 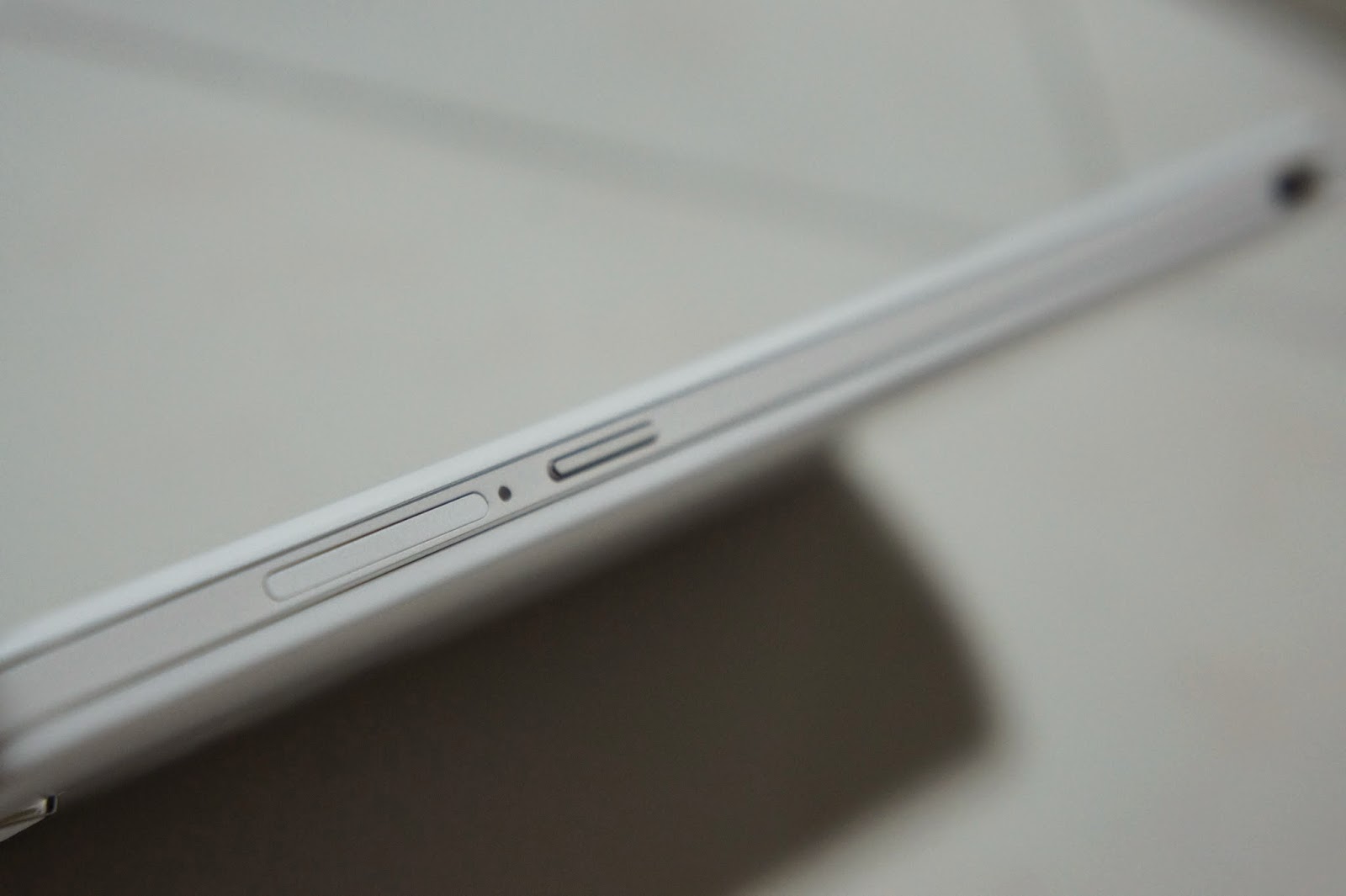 The SIM card slot is seamlessly placed at the side of the phone next MicroSD card slot. 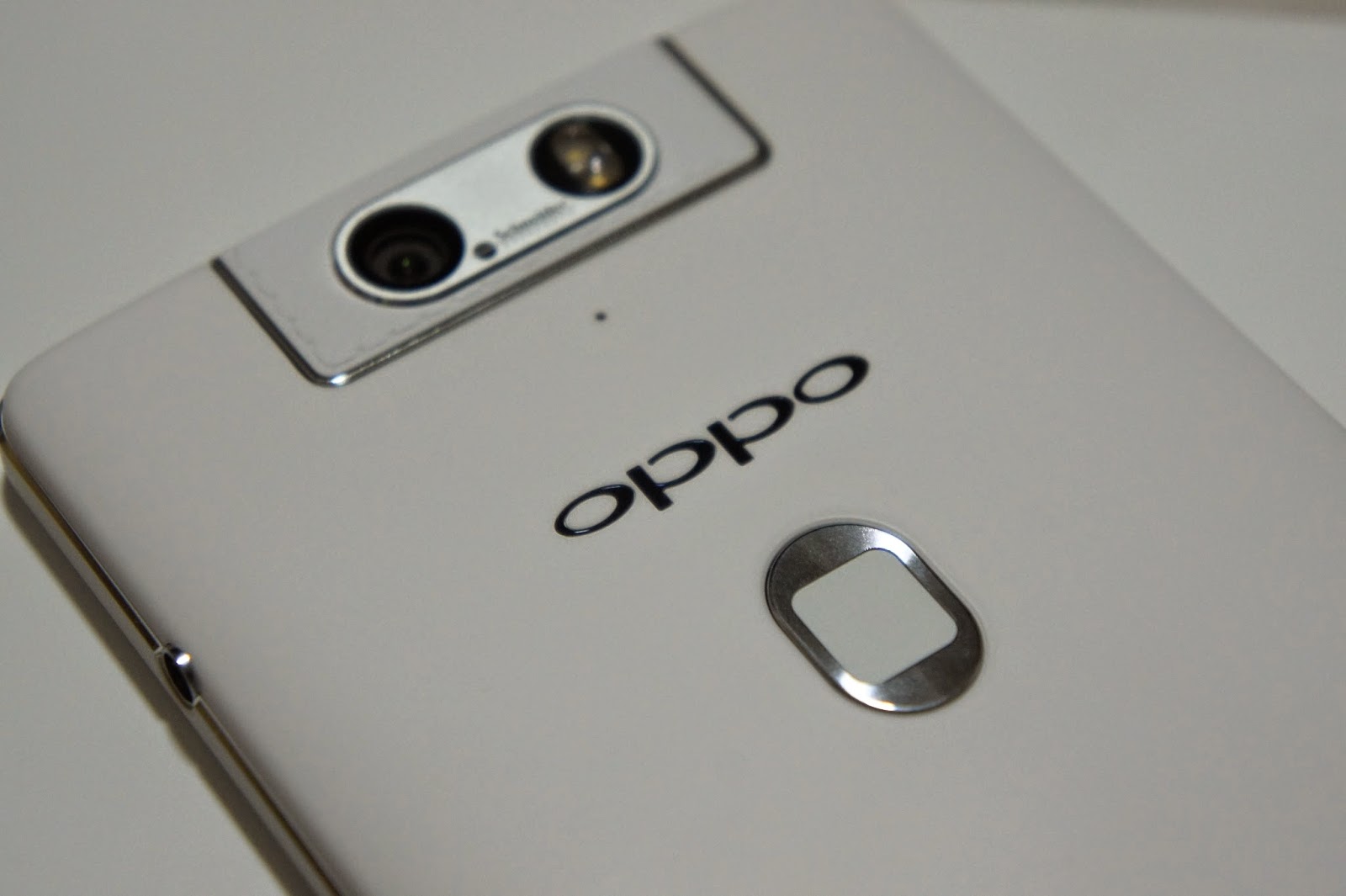 In a quest to achieve a perfect symmetry in the rear design, OPPO has decided to put the flash and the camera unit side by side in the middle of the whole phone. 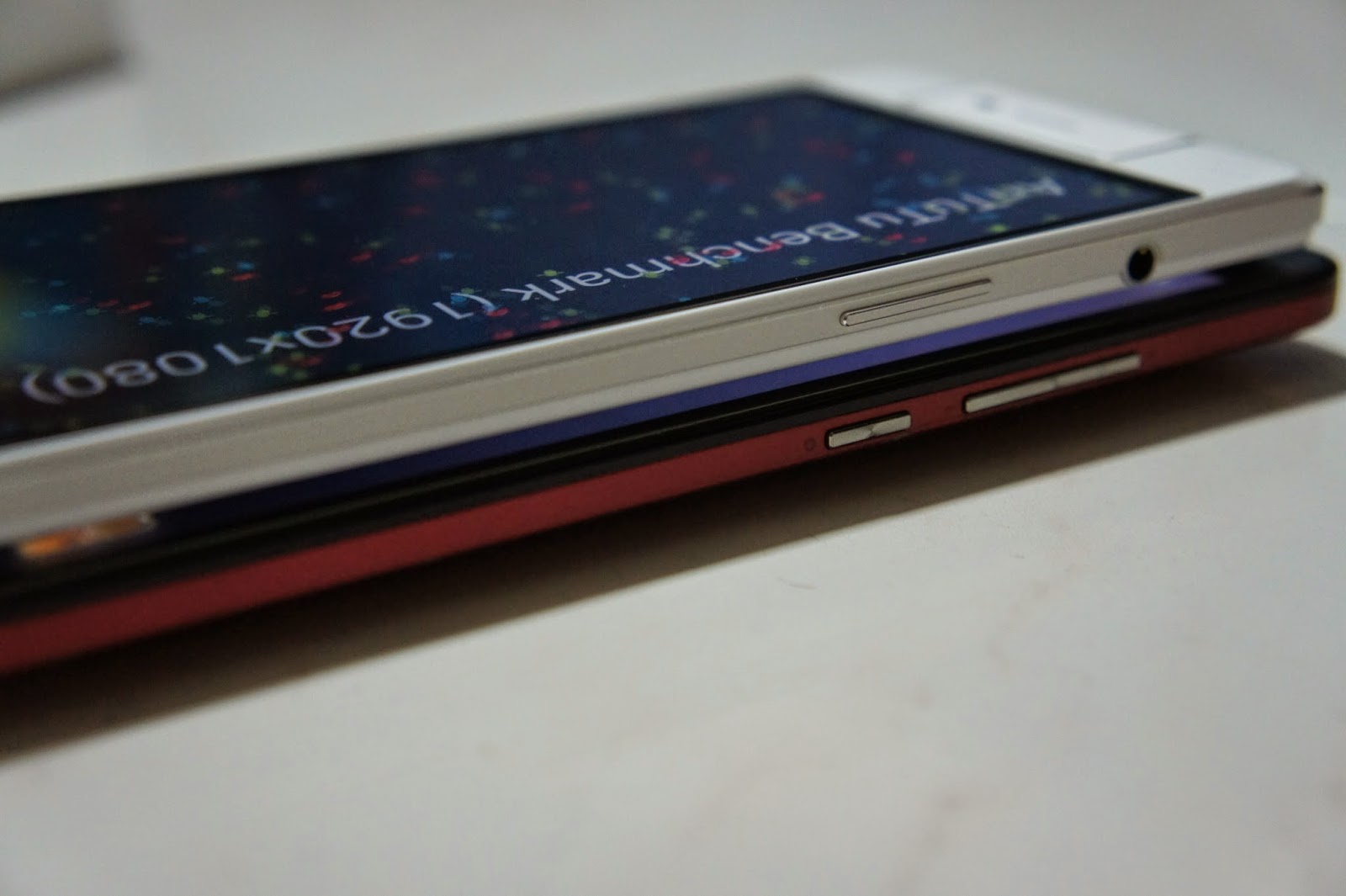 In terms of thickness, OPPO N3 is 9.9mm thick. As compared to other phones of the same calibre, it is considered thin, but what really creates the illusion of its sleekness is its clever use of metal and polycarbonate materials for the make up of the sides of the device.

It seems that OPPO has made a mistake to place the 3.5mm audio jack and MicroUSB charging port at the right side of the phone. Imagine putting on your wired headphones connected to the OPPO N3 in your pocket  – the audio plug will stick out to the sides of your pocket, bringing much discomfort to the user.

This feature is probably the main reason why the OPPO N3 is selling like hot cakes in China. OPPO N3 features a 16 Megapixels motorized rotating camera that is equipped with precision Schneider Optic lens. This translates to extremely high quality captures that OPPO claims to be even comparable to those taken from DSLRs.
The rotatable camera can used as both the front and rear camera. Stunning and high quality selfies can now be taken with this out of the world feature. Different kinds of compositions are also possible with this capabilities, bringing mobile photography to a whole new level.

With the motor that rotates the camera, the N3 is capable of taking automated panoramas without the need for the user to move his/her body. OPPO has also gave birth to a new type of panorama pictures –  vertical panoramas. Simply hold still to your OPPO N3 and the panoramic pictures will be taken automatically. It’s that simple. Thanks to Pure Image 2.0 Plus technology that is OPPO’s proprietary image processing technology, the smartphone is able to take these high quality pictures and intelligently adjust the white balance, brightness, focus, and other settings. 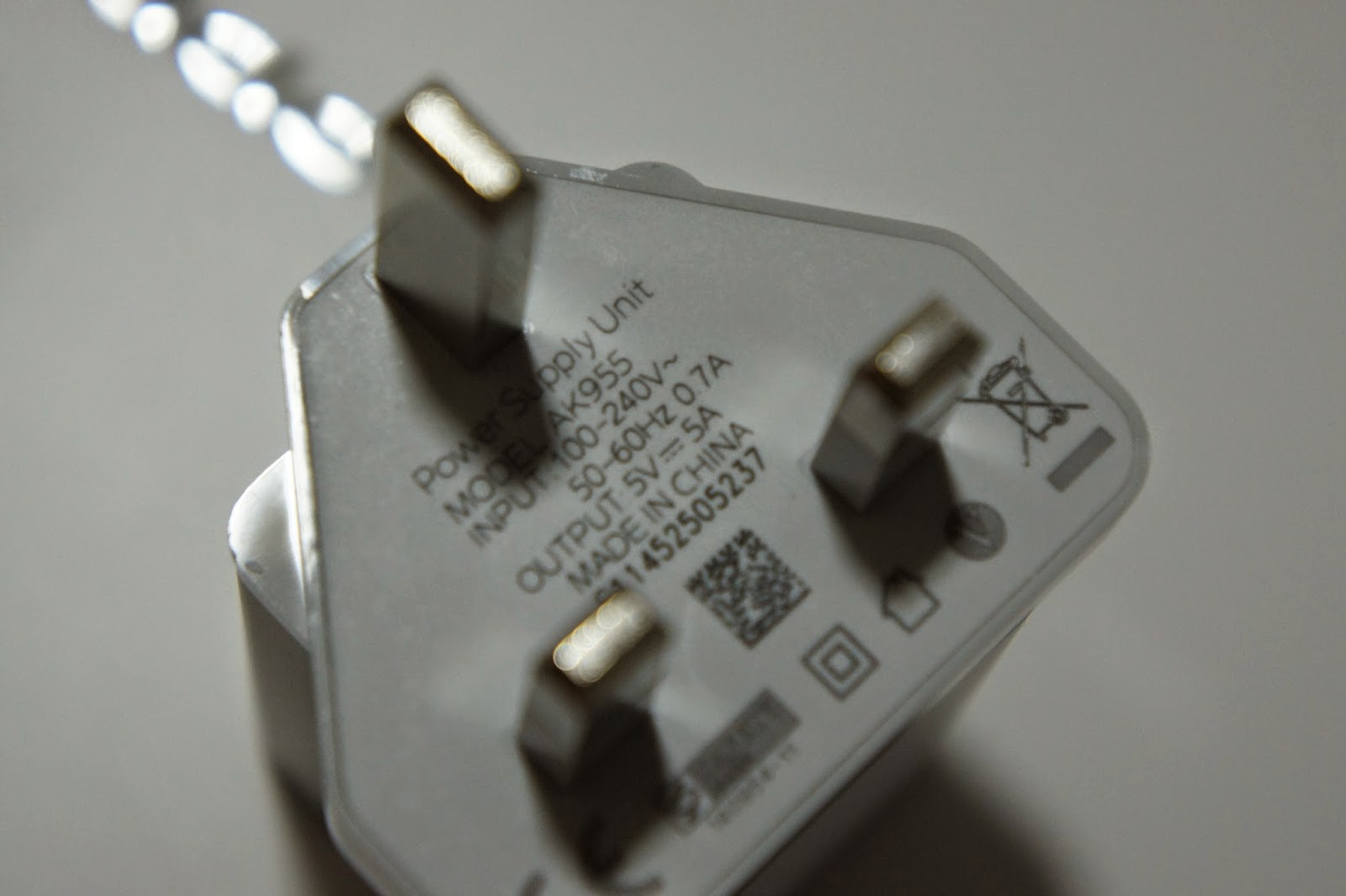 For non-technical users, VOOC Charging translates to ‘extremely fast charging’. This is made possible by the use of a non standard USB charger for the OPPO N3. According to USB standards, power must be delivered via 5V, 2amps. Instead, the OPPO N3’s VOOC charger delivers current at 5V, 5A, making the charging process to be 2.5 times faster than usual smartphones. 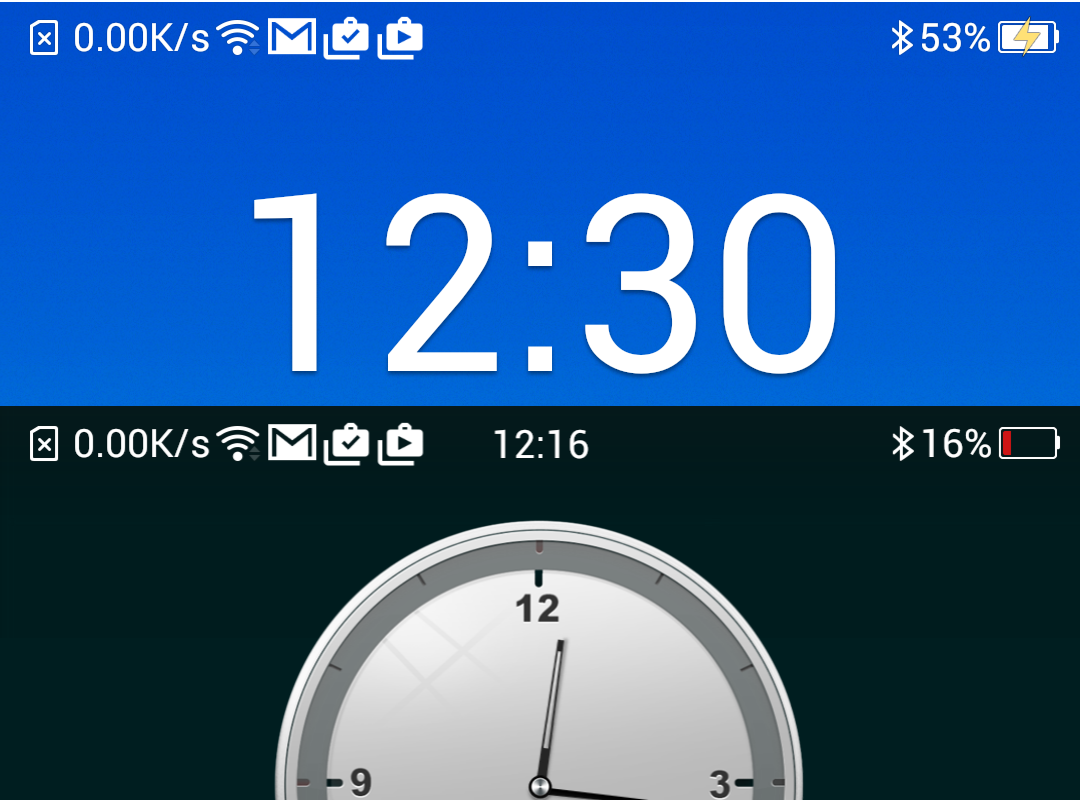 To put into context, at 12.16pm, the phone was plugged in to charge from a battery percentage of 16%. 14 minutes later at 12.30pm, the battery percentage was at 53%. This charging process is almost unheard of. The OPPO N3 was in fact charging a whooping rate of 2.64% per minute! Based on the specifications of the battery of the OPPO N3, that is around 80mAh of electric charge! 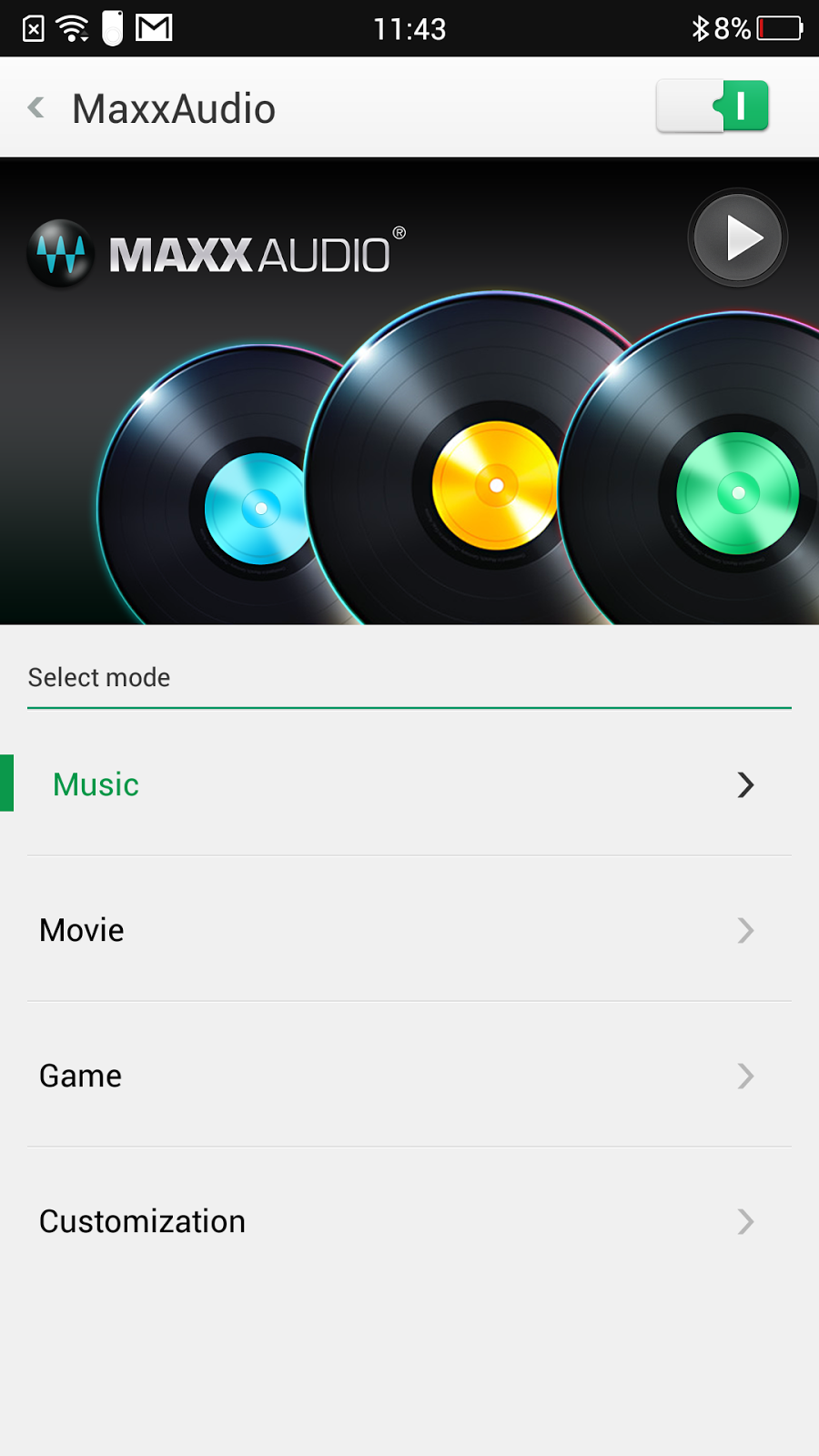 OPPO N3 has adopted both a hardware and software approach to bring out the best customized audio profiles for the users. Understanding that audio quality is dependent on the individual, hardware itself cannot fulfill the audio desires of every individual. Thus, by equipping the smartphone with a set of decent speakers which is capable of producing quality bass and sharp treble, these settings can then be set with the built in MaxxAudio software. As shown above, different audio profiles can be set depending on the user scenario. 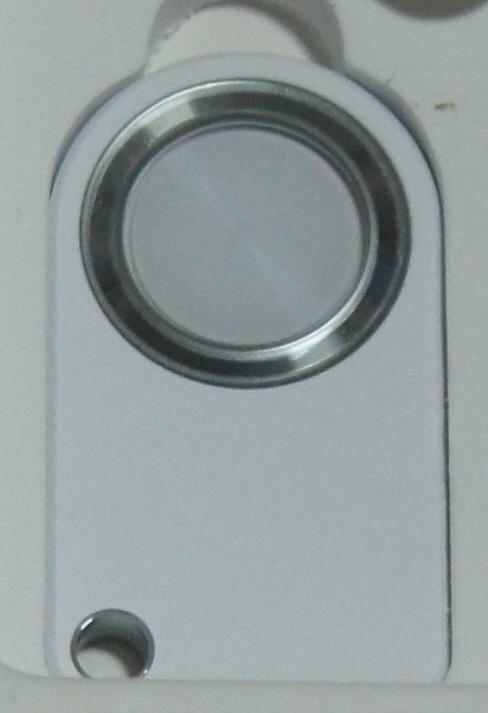 The OPPO O-Click is a simple bluetooth device that serves multiple purposes. Being powered by a CR2032 battery, the mini device connects to the smartphone via the O-Click App. Setting the device up is as simple as opening the app and pairing the device via bluetooth to the smartphone. Then, the O-Click device will have the power to control the smartphone remotely. It can be used as a remote shutter button for the camera. If not, it can be used to locate your phone or even act as a notification alert. 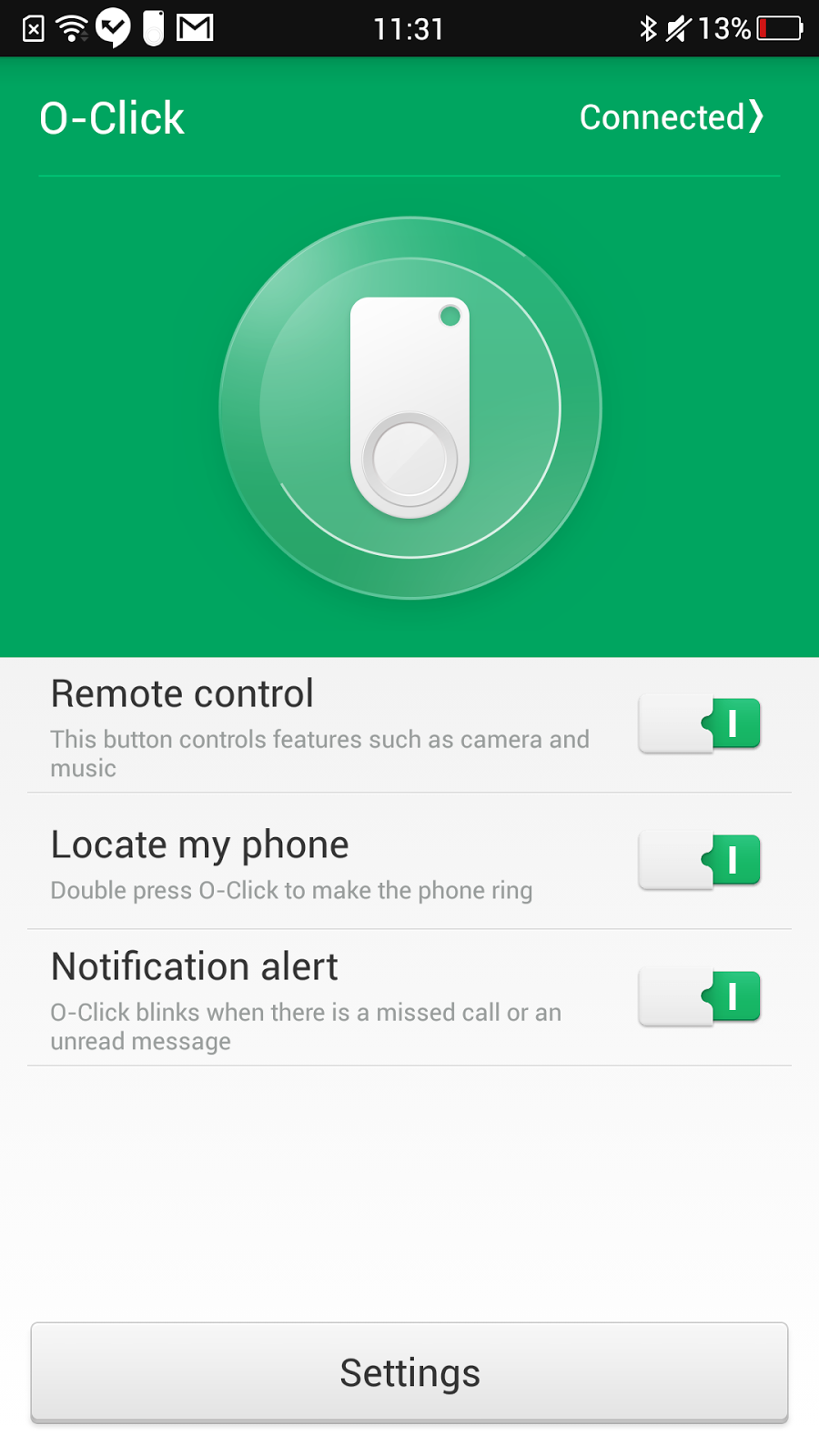 The O-Click device is a great add-on to make the whole OPPO N3 smartphone experience complete. By adding the device to my key bundle, I can have access to my phone controls remotely and get informed of notifications with the LED from O-Click. This accessory will be a great show off to other non-OPPO users. 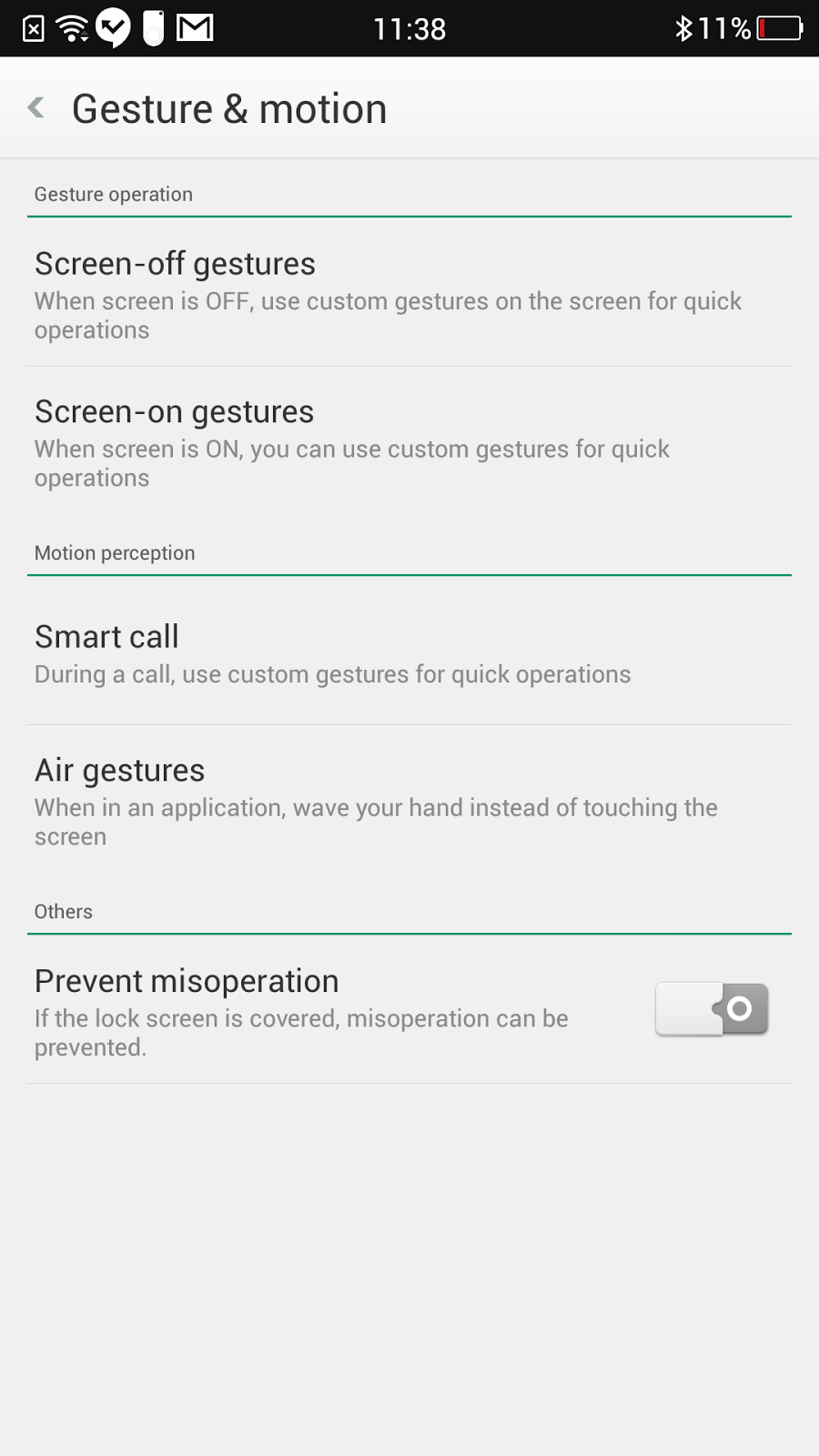 There are many ways of interaction with OPPO N3. Here are some gestures that can be used to command the smartphone to perform a certain task. These are not new, as we have seen them previously from LG and Samsung smartphones, but it is probably the first time when all the different gesture capabilities are put together into a single phone. 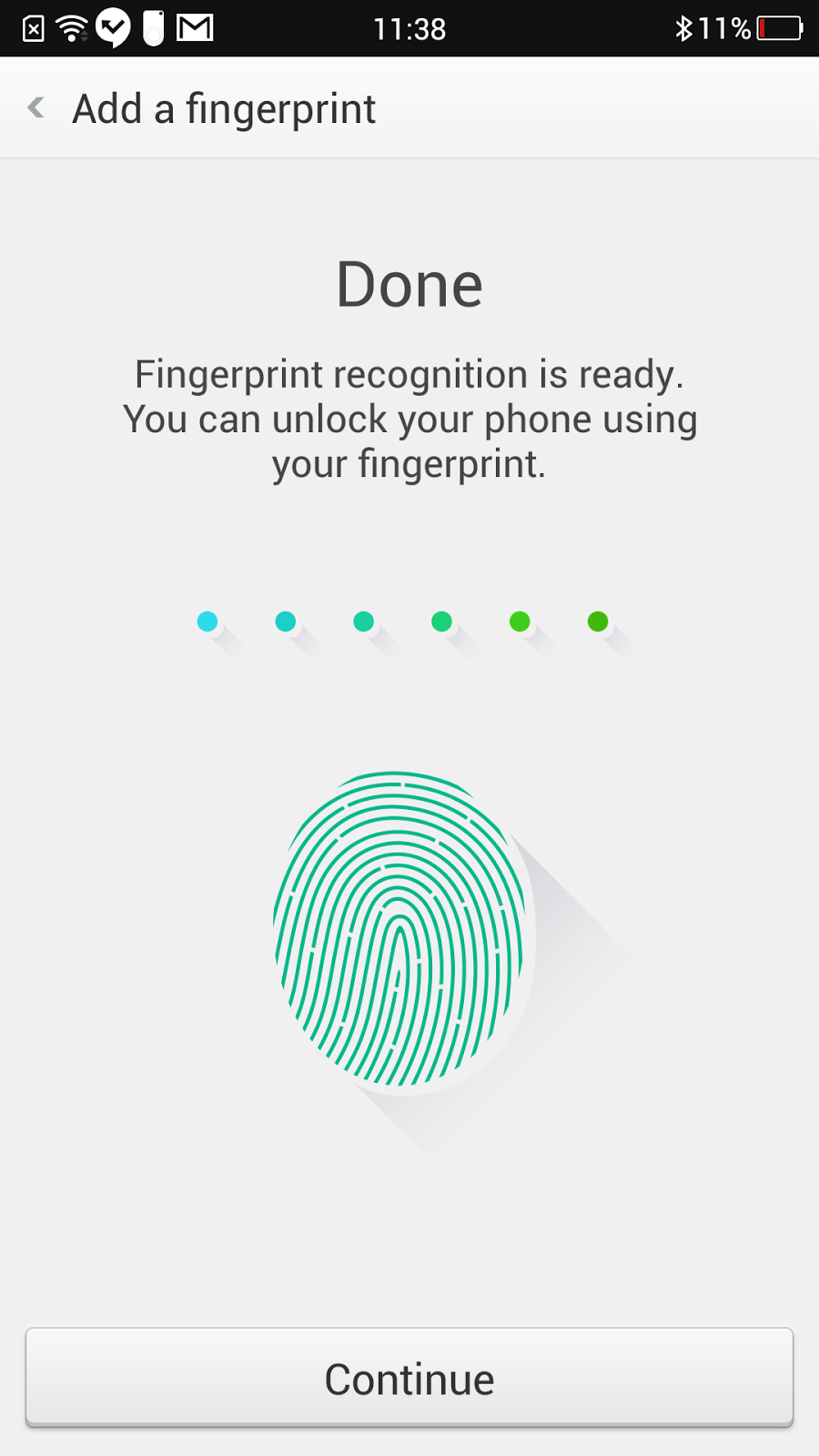 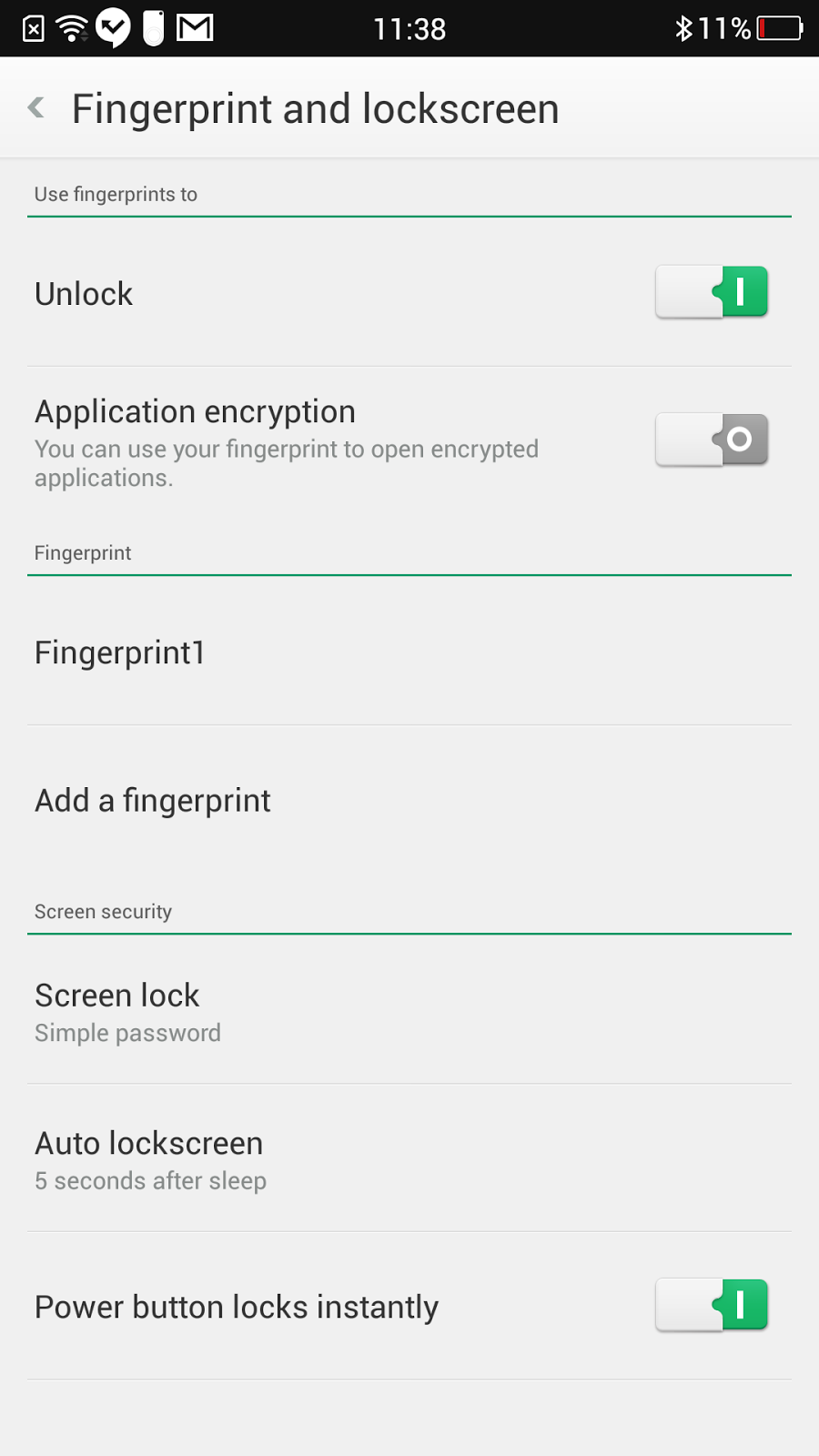 Like the HTC One Max smartphone, OPPO N3 has also got a fingerprint sensor that is placed at the rear of the smartphone. Companies who wants adopt a good secure device held by employees’ smartphones can also consider OPPO N3 as a corporate phone. The fingerprint that is input into the fingerprint sensor not only authenticates the user, but it also has the capability to encrypt a some applications, so as to prevent unauthorized access. 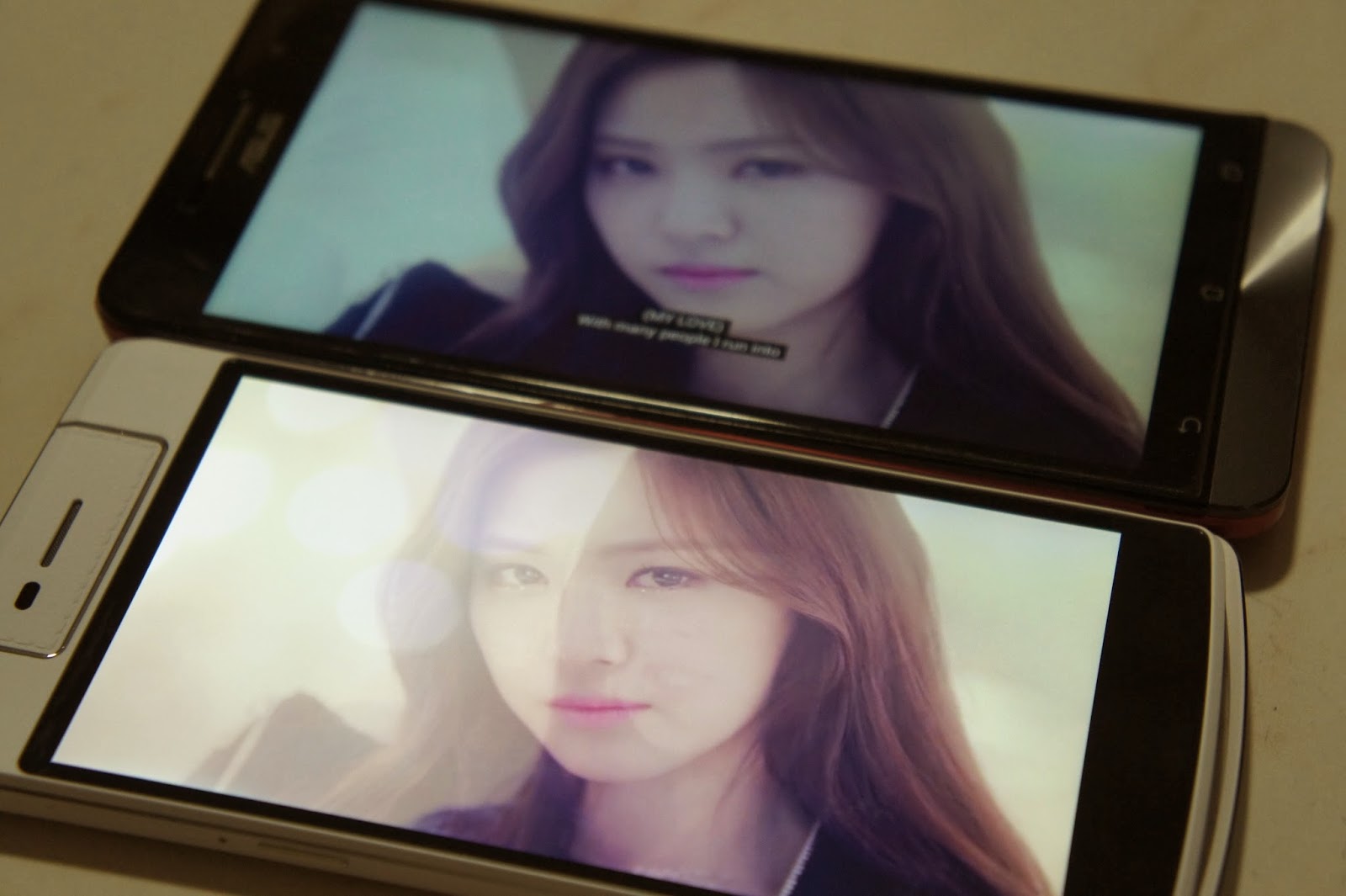 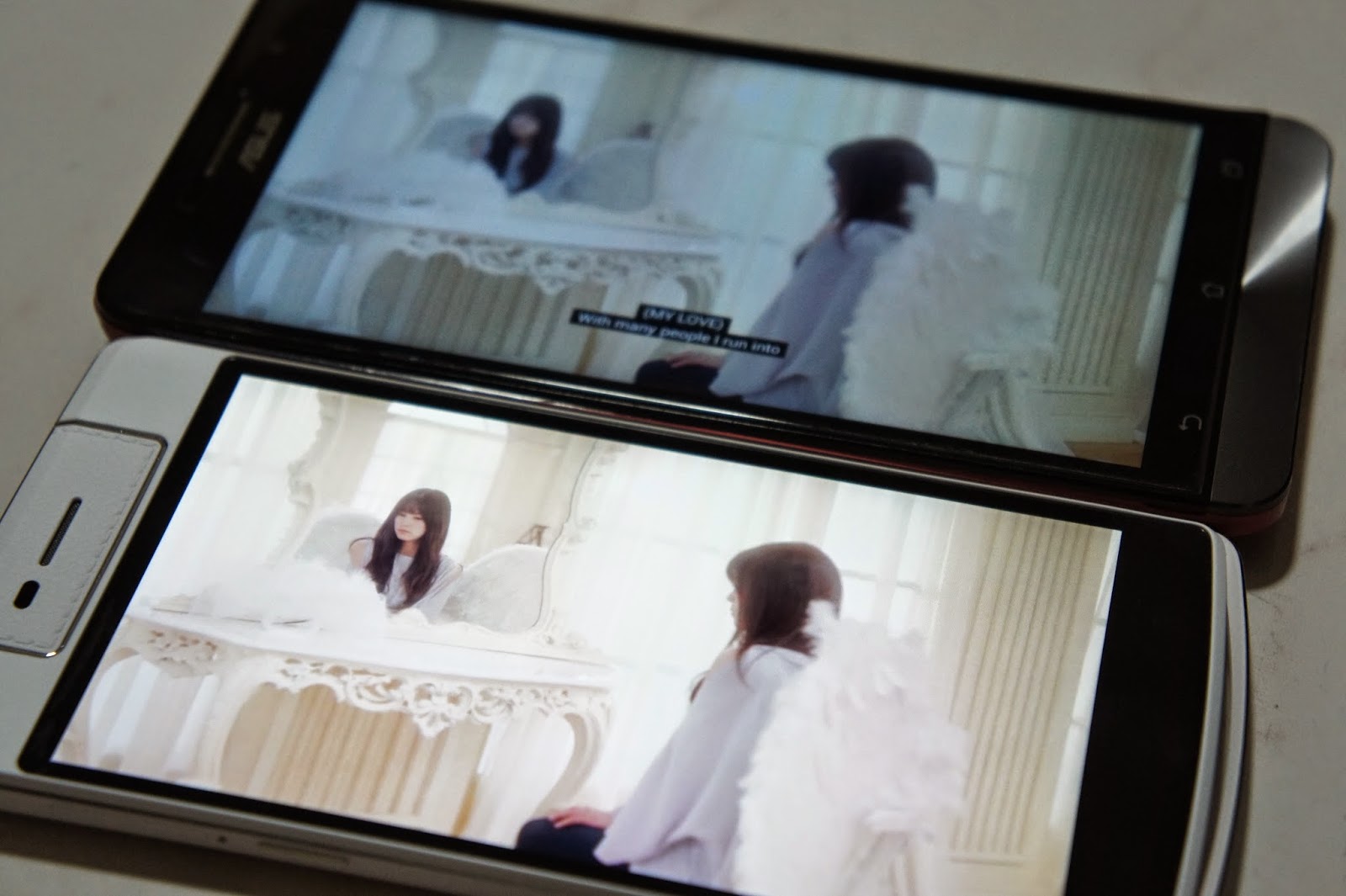 Increasing the brightness of the OPPO N3 to the maximum, we played a video and compared it to an ASUS Zenfone 6(max brightness) to determine the quality of the display. Upon closer inspection, we realised that OPPO N3 is in fact a lot brighter than the Zenfone, and was able to reproduce sharper and more well toned image.

OPPO N3’s camera is commendable. It was able to perform very well in both day and night tests and images captured were consistently good in all scenarios. As compared to ASUS Zenfone 6’s images, we can see that OPPO N3’s photos appeared a lot more colourful, while ASUS Zenfone’s appeared to be whitewashed. Additionally, the photos were a lot wider than the Zenfone’s. It could also be thanks to their image processing technology built in that can result in such vibrant images reproduced.
Processing 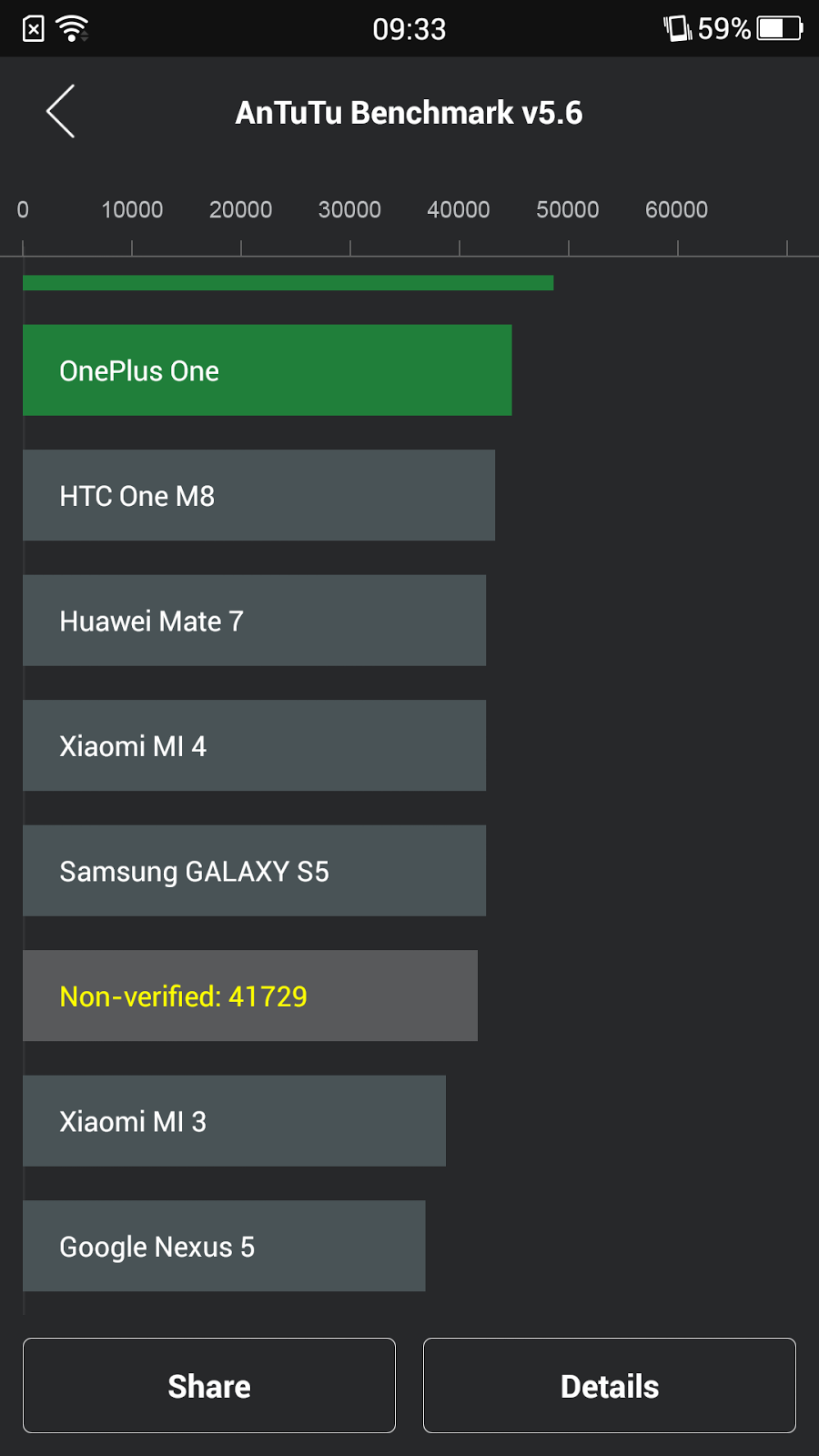 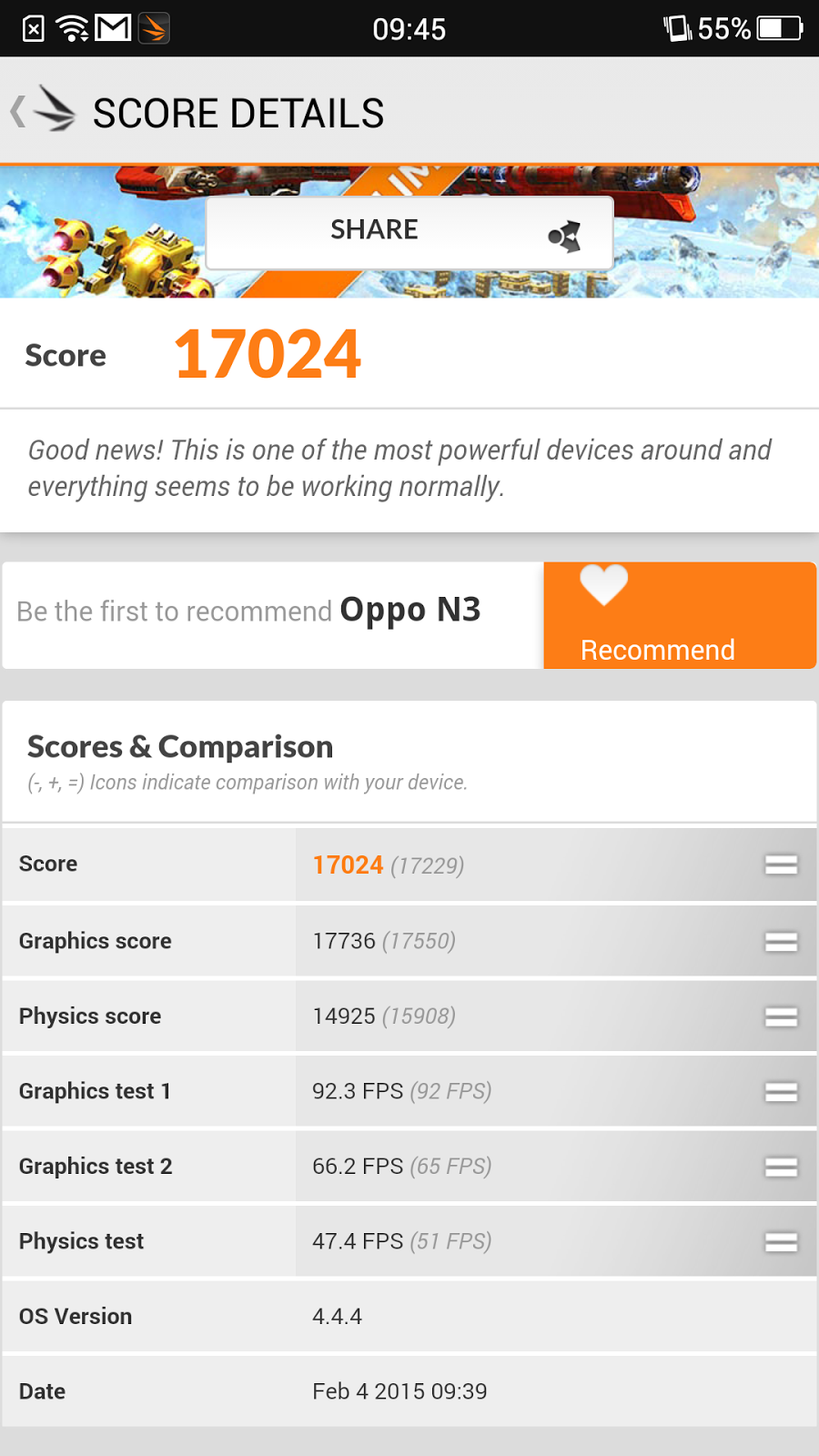 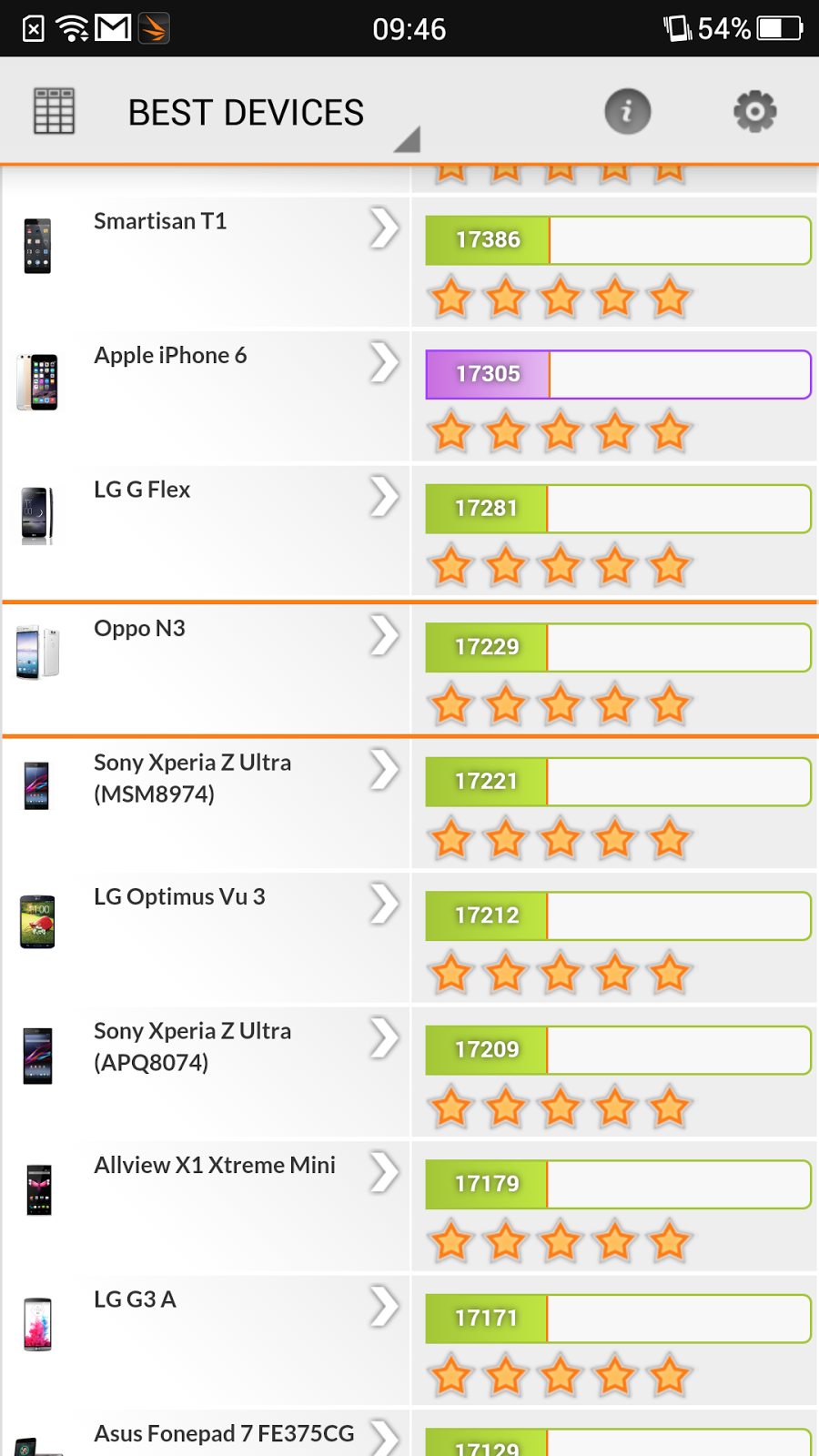 After putting the phone through both 3DMark and AnTuTu tests, we were affirmed that this smartphone belongs to the of the line product. It is in fact only a few points away from a Samsung Galaxy S5 in the AnTuTu performance and has similar gaming performance as an iPhone 6.

Do not belittle the OPPO N3 smartphone. The OPPO N3 is one of the best smartphones I have tested so far and comparing it to other high end smartphones out in the market, it definitely has got what it takes to stay strong in the game. The most compelling reason to purchase the OPPO N3 is none other than its powerful camera. Its rotatable camera is a great to have and will be loved by people who takes selfies on a daily basis. Additional features such as its fingerprint sensor, gestures interactions and VOOC charging capabilities are also plus points that one can consider when making their purchase decisions.

However, we still disliked the headphone jack and microUSB port which are awkwardly placed at the side of the smartphone. Nonetheless, the pros far outweighs the cons of the OPPO N3 and we feel that it is a great device to own, and is definitely here to stay.