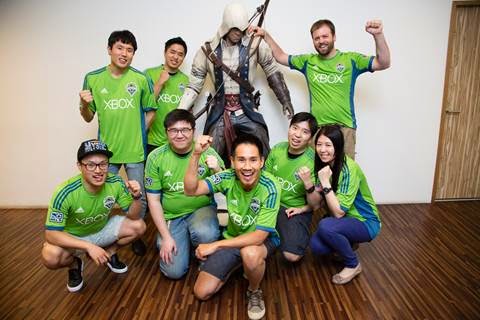 Singapore, 30 January 2015 – Nguyen Q Hy, the grand prize winner of the Xbox One High Flyers competition for Singapore joined his counterparts from four other countries in the region in kicking off the High Flyers tour at the Ubisoft game development studio in Singapore this morning.*
“I’m so happy and excited about the trip. This will be my first US trip, and also the first time I will have a chance to visit several world-renowned game studios,” he said.
Over the next ten days, the High Flyers winners and their guests will jet-set across the globe to experience the trip of a lifetime. In addition to the Ubisoft studio visit in Singapore, winners will also get to attend the Super Bowl XLIX in the United States, the Merseyside Derby in the United Kingdom, as well as gain exclusive access to other major game development studios in these countries including Canada.
“The Super Bowl will be a highlight for me. It’s been on my bucket list since I was young, but it’s hard to pick a favourite part of the trip cause it all sounds amazing,” said Maxwell Tuffs, the winner from New Zealand.
High Flyers is about celebrating the spectacular games on Xbox One while rewarding fans for their unwavering loyalty to the platform, and boundless enthusiasm in participating in Xbox community activities. The seven-week competition ran from 10 November 2014 to 28 December 2014.
Apart from the grand prize, limited edition prizes were also given away every week throughout the High Flyers competition. These ranged from a Master Chief helmet signed by the team at 343 Industries, to a Barclays Premier League jersey, courtesy of the team at EA Sports.
The Xbox One High Flyers Winners Tour kicks off in Singapore on 30 January 2015 and follows the schedule below:
Day 1 – Visit Ubisoft Singapore’s Assassin’s Creed sound studio to record your voice
Day 2 – Grand Canyon Tour aboard a Helicopter
Day 3 – Attend Super Bowl XLIX in Glendale, Arizona
Day 4 – Drive supercars on a race track and Depart for Vancouver, Canada
Day 5 – Visit the EA Sports Studio for a Motion Capture session, followed by a visit to Capcom Studios
Day 6 – Visit 343 Studios and get a joy ride on the Warthog
Day 7 – Visit Insomniac Studios
Day 8 – Travel to United Kingdom for lunch at Playground Games
Day 9 – Attend the Merseyside Derby
Day 10 – Travel Home
Follow their journey on our Facebook Page – www.xbox.com/en-SG/HighFlyers
*Participating countries for the Xbox One High Flyers competition: South Korea, Singapore, Taiwan, Hong Kong, and New Zealand

“Bloodborne™”, a PlayStation®4 exclusive Action RPG, will be released on 24th March, 2015 in Asia.