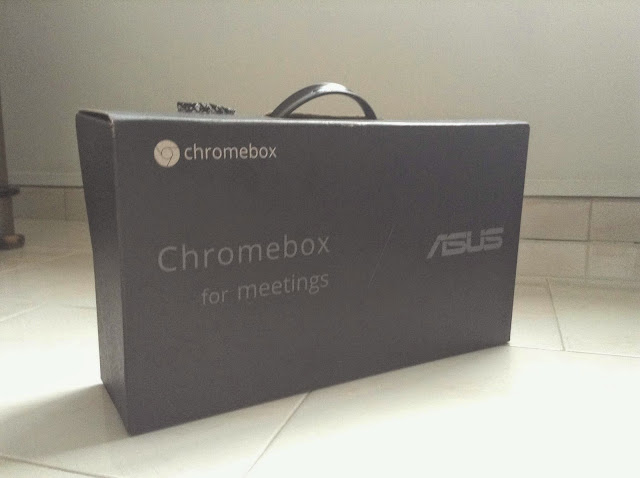 At the recent ‘In Search of Your Future Home’ event, ASUS showcased some of their latest products that are coming into the market. Other than  products that focuses on the general consumer and gamers’ market, some products for businesses were also presented. The ASUS Chromebox for meetings was a particularly interesting product that caught my eyes. It was a really small and petite machine that is equipped with high end hardware. With the increasing popularity of Google’s Chrome OS and uprising of Chromebooks from various brands, could this machine be the next choice for you SOHO setup? 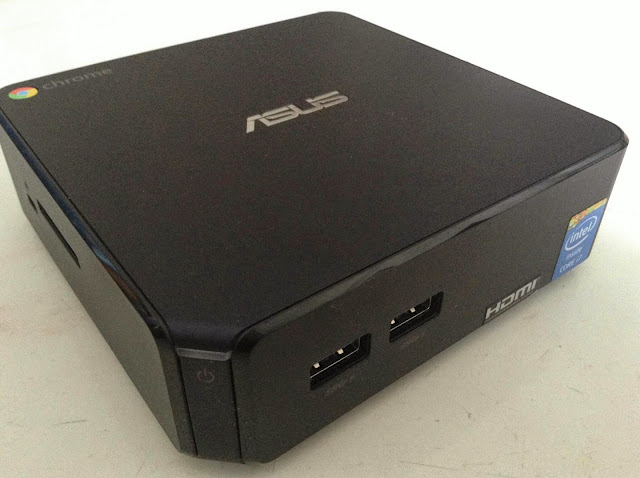 The ASUS Chromebox for meetings is essentially a Chrome OS enabled mini-pc. It is targeted to users who want to setup a video conferencing room and looking for a simple all-in-one solution to get it done. That is why the ASUS Chromebox for meetings is also bundled with a speakerphone as well as a webcam. This device is a great choice for any businesses who uses Google Hangout for their meetings as it is optimized for the software. Alternatively, as the number of apps on Google Chrome store increases, we can gauge the opportunities and possibilities of what this machine holds.

Honestly speaking, the ASUS Chromebox is made to do far beyond what it is supposed to do. Equipped with an Intel Core i7 processor, the function that it perform really mismatches its hardware. Of course, you will be ensured of a smooth experience on the applications running on the Chromebox. 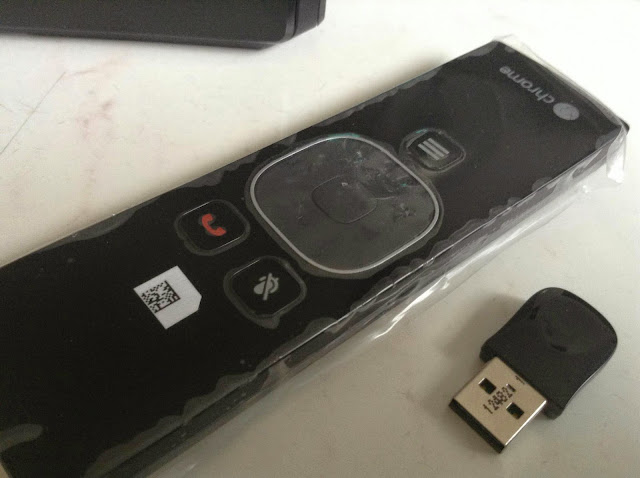 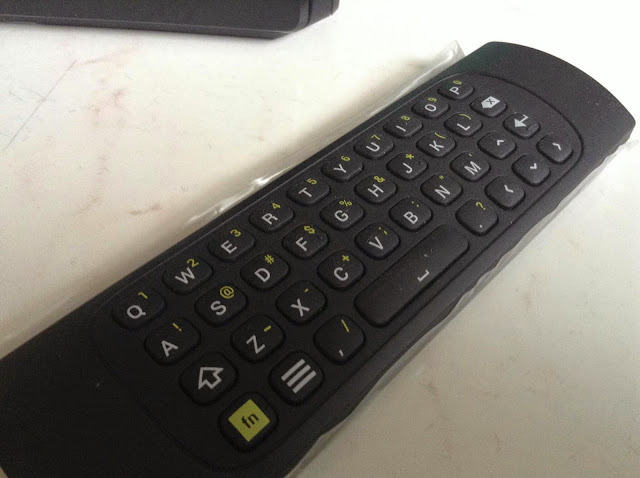 Included in the package is a remote mini qwerty keyboard. This keyboard is wirelessly connected to the Chromebox via a USB dongle. On the other side of the keyboard the answer/reject and mute buttons. There are also navigational buttons on the remote for easy control of the OS. However, we found that the remote only works well in the preinstalled Google Hangout app. Additionally, if you had to troubleshoot the system due to unknown errors, the remote control is as good as useless. 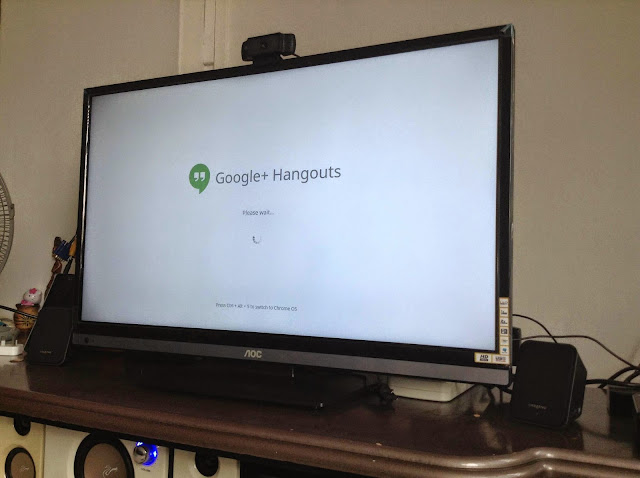 For example, we had a choice to boot into Chrome OS by holding onto CTRL+ALT+S. However, this was not possible on the remote keyboard as there were no CTRL and ALT keys. We found out that the only way to get it done was to connect another Windows based keyboard that has all those keys. It would be much appreciated if more thoughts were put into the remote keyboard to make it more usable and the system workable out of the box. 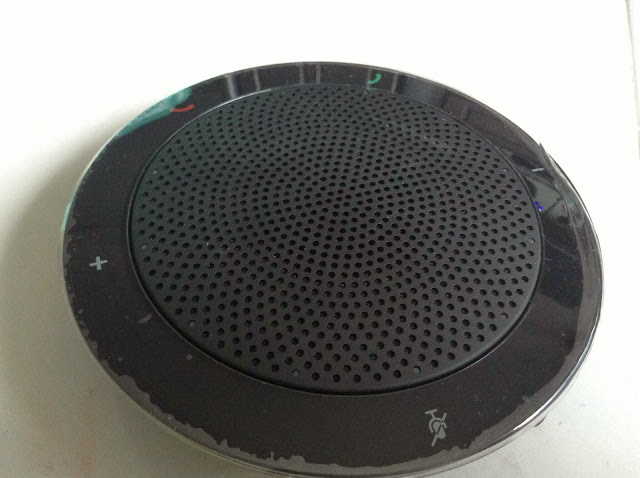 Also included in the package is a high quality speakerphone. How do we know that it is of a good build? Upon flipping the speakerphone over, we realised that the speakerphone is in fact made by Jabra. After trying out many Jabra products previously, we’re quite sure that brand is reputable and never fails to uphold its quality. Additionally, answering of calls and other functions like manipulation of volume can also be done from the quick access buttons on the speakerphone. On a side note, the speakerphone is connected to the Chromebox via a USB cable. 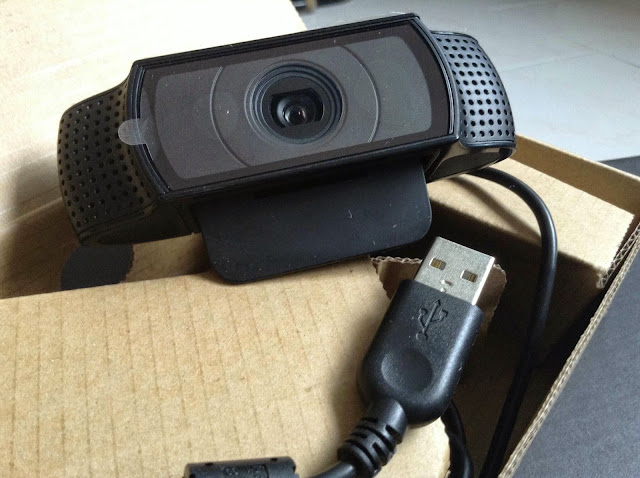 Google required ASUS to include a Logitech C920 HD Webcam so that all the web conferencing video will be crystal clear. The Webcam is also connected to the system via a USB connector.

Setting up the Google Chromebox was fairly simple. We just had to connect all devices via the USB ports on the Chromebox, and switch the system on. 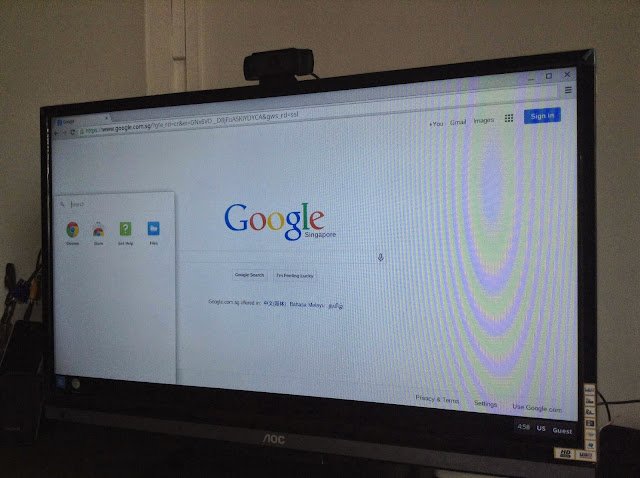 Other than Google Hangout that was specially made for the Chromebox for meetings, we can also access the conventional Google Chrome OS. With Google Chrome O,S we can access many different kinds of web apps and even productivity apps from Google. 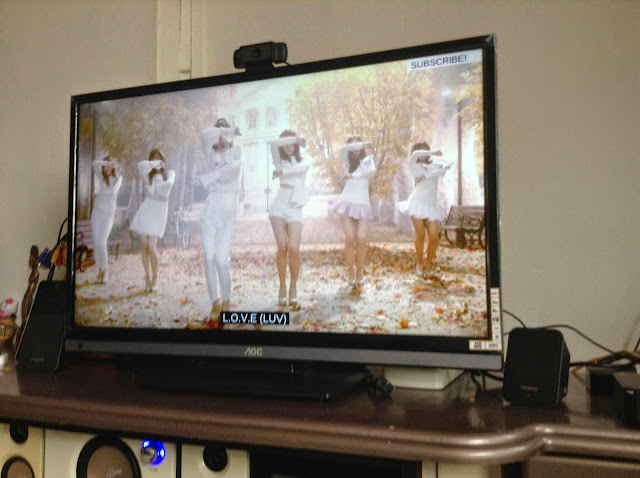 Of course, media files were streamed the to Chromebox very smoothly as well, thanks to the equipped Wireless N and Gigabit LAN interfaces. We found out that the Chromebox is actually quite suitable to be made as a home entertainment PC as well, if you have your media files stored on a home server and accessible by the web.

We found the preinstalled Google Hangout app that was developed specifically for the Chromebox very optimized and simple to use. For businesses who relies much on Google Hangout for their meetings, this is a good choice. The included Jabra speakerphone and Logitech HD Webcam ensured that video call quality was not compromised. Of course, this coupled with the high end system configured by ASUS that includes a fast and furious Intel Core i7 processor, Wireless N and Gigabit Ethernet made our experience on the Chromebox for Meetings a very pleasant one. Moreover, the Chromebox for meetings can also be mounted at the back of the TV so as to keep the office neat and tidy. Free Google Drive storage space that comes with the purchase of Chromebox could also attract potential buyers to use this as their media PC as they can store files right on the cloud.
Much of the complains on the product comes from the fact that the keyboard included was quite unusable in Chrome OS. We think that a more functional remote keyboard can make our experience a much better one.
With the increasing popularity of web apps that are developed both online and on the Chrome Store, the Chromebox is here to stay. We are looking forward to more apps to be launched on the Chrome Store and the day that such web connected device could take over your usual PCs for day to day usage.
Purchase it on lazada here.