Similar to previous generations, Padfone is a smartphone device which can be expanded into a larger screen by docking into a tablet screen station. There are some improvements which we’ve found in the new device and were thrilled to introduce to you, specifically its high pixel density display. ASUS was early in adopting the technology when they released the Padfone Infinity back in June with Full-HD display resolution. Other manufacturers have only recently started to roll them out into the market. 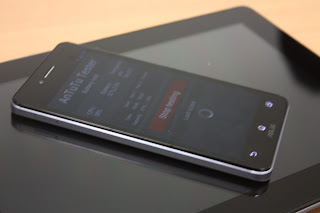 ASUS has adopted a rather unique design to the front of the PadFone Infinity. Instead of segregation the screen section with the non-screen section, they decided to overlay a whole piece of scratch resistant Corning glass and used a similar black to colour the non display areas. This gives the whole outlook of the PadFone front to look polished and sturdy. At the bottom, we can see three touch sensitive buttons which we thought were a better choice as compared to physical buttons as they will not fail and become unresponsive after long term use. 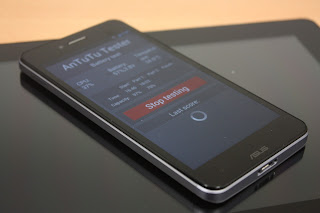 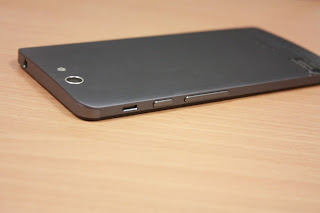 On the left side, there is a nano-SIM slot for the PadFone Infinity. In order to include more hardware into the unit, ASUS has adopted the use of nano-SIM instead of the more common micro-SIM. This also means that you will have to cut your SIM card even smaller into the nanoSIM form factor in order for this phone to work with your network. 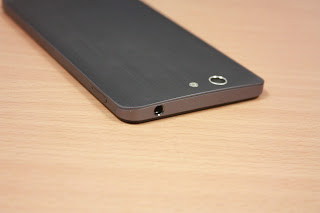 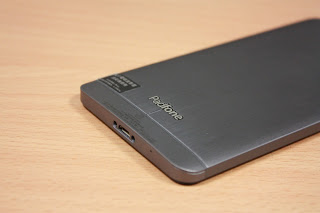 A standard 3.5mm headphone jack is found at the top and a microUSB port is found at the bottom. The ports are placed there for a reason. It will be almost unusable for audio ports to be placed at the sides as they will take up more width space and prevent users from putting their headphones in their pockets when listening to music. Also, placing the microUSB port at the button ensures compatibility with smartphone covers in the market. For example, book cover styled covers can be closed when the phone is charging. It would not have been possible if the port was placed on the left/right side. 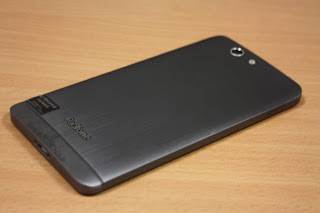 The most sexy part of the device is perhaps its back. It has a brushed aluminum finish, giving it a similar feel on a ASUS Zenbook Ultrabook computer. Even though it is brushed metal, it still remains smooth. It leaves the back of the device fingerprint proof and probably is the sexiest smartphone on the market with the use of such material and finishing. Other than the Titanium Gray version which is shown in the photo, it is also available in Hot Pink and Champagne Gold. 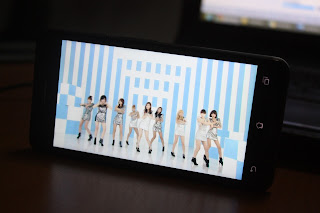 People are saying that once small smartphone screen reaches a certain pixel density, users will not be able to see the difference between a display with higher pixel density as compared to one with lower pixel density. However, when playing a FullHD video on the ASUS Padfone Infinity, one can immediately feel the difference in terms of picture quality. The video being played on the device looks so much clearer and smoother as compared to previous generation 1280 x 720 resolution within such small screen size. This is also what makes the PadFone Infinity stand out from the rest of the smartphones of the same class. It’s stunning 1080p display panel allows images and videos to be viewed at the best of quality and gives users the best video viewing experience possible. 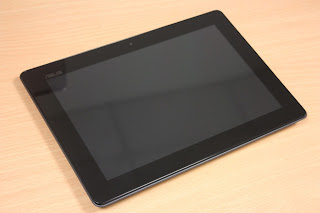 The PadFone series differs from other smartphones with its ability to be transformed into a tablet device by installing the smartphone into PadFone Station. PadFone Station has also improved significantly from its previous generation. Today, the latest PadFone Infinity Station comes with a resolution of 1920 x 1200 in a 10.1 inch screen size.
Trust me, 1920 x 1200 resolution in a 10.1 inch display still results in a pretty high pixel density. Usual 14 inch notebook devices only have a 1366 x 768 resolution. 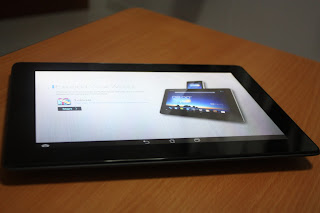 Unlike the smartphone which comes in a 16:9 aspect ratio, PadFone Infinity Station comes in a 16:10. This is because the synthetic touch buttons are now replaced with stock Android software buttons. 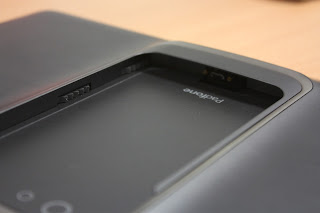 The back of the PadFone Infinity Station is made with a rubbery polycarbonate material which makes holding on to the converted tablet device strain free. 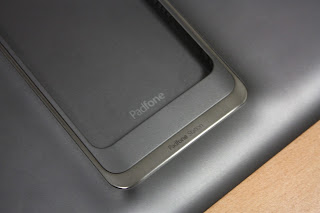 Similar to the PadFone 2, rubber gromets are placed on the sides of the phone to prevent accidental scratches when inserting or remove the PadFone Infinity from its station. 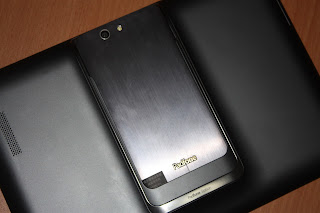 We’ve put the PadFone Infinity to simple tests by carrying out sample test shots. The photos taken for comparison sake are from a Samsung Galaxy S II. 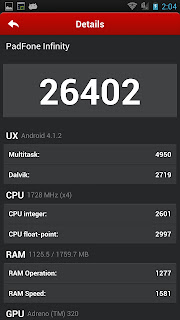 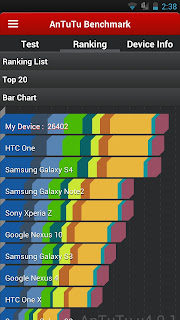 The PadFone Infinity which utilizes a Qualcomm Snapdragon 600 processor performed very well in hardware performance tests. On AnTuTu benchmark, it scored a high 26402 points, making it faster than smartphones from the same market segment. As shown in the ranking page above, it is in fact faster than a standard HTC One device, Samsung Galaxy S4, Note2 as well as Sony’s Xperia Z smartphone. We are also expecting the PadFone Infinity to be refreshed with a faster Qualcomm Snapdragon 800 processor later in the year which will result in higher scores, possibly crossing above the 30000 mark. 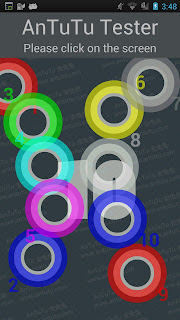 ASUS did not really talk a lot about the multi-touch capabilities of the PadFone Infinity, but AnTuTu touch screen test revealed that the touch panel supports up to 10-points on the screen at a single time. 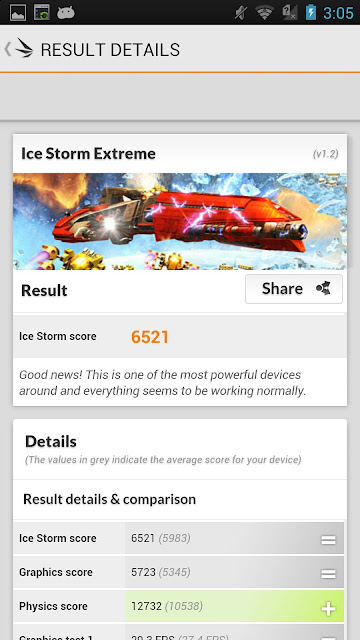 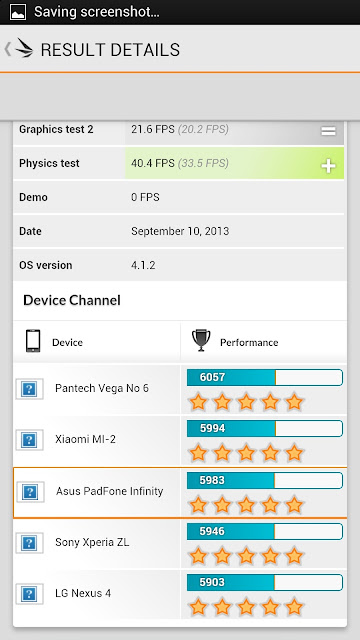 Such score is better than a Sony Xperia ZL smartphone as shown in the comparison charts above. However, do note that despite the differences in score, all these smartphones are rated with 5 stars for performance. This means that graphics intensive games will be able to be played smoothly on the PadFone Infinity.

The PadFone Infinity is often being forgotten as an all-rounder smartphone which excels in all aspects. It has a great display, good camera, high performing hardware and a nice metallic brushed aluminum back body design. It has got just the right features for someone who wants a fast and stylish everyday smartphone. We felt that the ability to transform the smartphone into a tablet has added value to the smartphone, but also distracted potential buyers from getting the smartphone itself.
Much marketing dollars have been put into telling potential customers that PadFone Infinity is able to be transformed into a tablet device, but has failed to bring across the idea of the smartphone itself being a piece of flagship technology art from ASUS. This has resulted in many people who are looking for a good smartphone to not even think about the PadFone Infinity because they don’t need the capabilities to transform their smartphone into a tablet, and thus preferred alternative products.
I would like to personally point out that the ASUS PadFone Infinity is definitely on par and even better than the best Android smartphones currently on the market like the popular HTC One and Samsung Galaxy S4. If you are looking at a new smartphone of such category, you would definitely want to consider this device as well.
As for my thoughts on the PadFone Infinity station, it was great with the ability to expand to a bigger screen, but I felt that PadFone Infinity’s screen is already big enough for everyday use and that it is too expensive to upgrade to a bigger screen with PadFone Infinity. However, for those who really wants to just have a single device that acts as a tablet as well as a smartphone while using the same data plan, this solution is probably the one and only in the market right now.

PadFone Infinity now comes in three colours and will be available at StarHub, M1 and ASUS authorised retailers.
Both mobile operators will offer the phone-tablet hybrid device at a range of attractive mobile price plans that will allow customers to connect to the respective DC-HSPA+ mobile networks. Consumers can also purchase the smartphone and tablet station separately at the selected ASUS authorised retailers.