Famous technology teardown site iFixit has already got their hands on the newest Nexus 7 from Google and ASUS. Of course, they disassembled the new tablet PC, allowing us to have a glimpse of its internal hardware and components.

Since Nexus 7 uses little glue to secure its internal parts, iFixit  said that it only requires the use of some simple plastic tools to fully dismantle the Android Tablet PC. iFixit gave Nexus 7 a score of 7 out of 10, claiming that this new tablet is fairly simple to fix.

The new Nexus 7 is different from the previous gen’s in terms of appearance as it does not have a textured back. Also, the side bezels is also narrower than last year’s Nexus 7. Since Nexus 7 supports wireless charging, iFixit found its battery to be equipped with an induction coil manufactured by Texas Instruments. The BQ51013B wireless charging controller manages the whole wireless charging system. Additionally, the tablet device has a mainboard with J4216EFBG SDRAM from Elpida and a daughter board which can be easily separated. Nexus 7 uses SK Hynix’s 16GB NAND memory for storage. 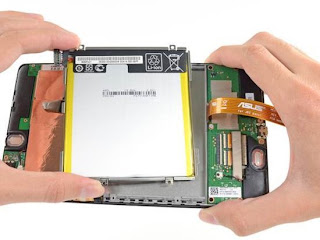 Generally speaking, other than the LCD panel which requires a hot air blower to be removed, iFixit claims that with the right tools, Nexus 7 can be easily disassembled. This means that users can easily fix the new Nexus 7 themselves if they know what they are doing. Of course, warranty is void when you crack open the tablet device. 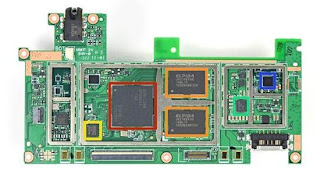 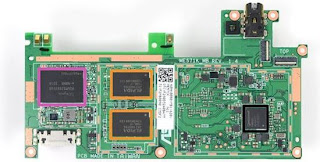