Will we see a AMD Radeon HD8970 card this year? - The Tech Revolutionist

Will we see a AMD Radeon HD8970 card this year?

AMD Radeon HD8970 graphics card already exists on the market. However, these graphics card are just a rebranded HD7970 and only certain OEM manufacturers such as HP, Dell and others will get their hands on them. Even though this is the case, there are rumours circulating around the internet that HD8970 will also be available to the end user market and retailers will use this to replace the current HD7970. Reports have previously confirmed that AMD will not provide any new generation graphic cards this year. Have they changed their mind? Today, there are leaked specifications and photos of a new graphics card that is said to be based on a new Curacao XT core. This new graphics card translates into a new HD8970. 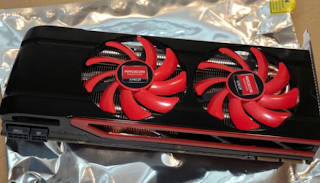 Curacao XT will have more stream processors as compared to the current flagship Tahiti XT. The new graphics core will also have more ROPs and TMUs, which are shown in the table below.  The new card will have a same GDDR5 memory type and a size of 3GB, running through a 384bit memory interface. Other than knowing that the new Curacao XT is based on a 28nm manufacturing process for a GCN architecture, there are no other information shown on this slide.

This rumour is not in line with AMD’s roadmap. We are not sure if AMD will launch Curacao XT this year to compete with GeForce 700 series cards, or the GeForce 600 series. However, as these are all simply rumours and are not confirmed, it should be taken with a pinch of salt.

If 1kW of power is not enough, try the new EVGA SUPERNOVA 1300 G2 Gold PSU