Singapore has already rolled out Optical Fibre Broadband for about two years now. As the market gets more competitive with new vendors joining the race, different vendors need to do things differently in order to stand out from the rest. For example, Viewquest is offering contract free fibre broadband plans. 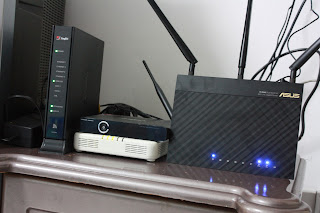 Fibre Internet speeds are extremely fast. It is so fast that usually, the personal home network infrastructure is unable to sustain the speed. For instance, wireless N (802.11n) speeds are theoretically limited at 300Mbps and practically averages at 50Mbps. If a user signs up for a 100Mbps Fibre Broadband plan and plans to reply solely on wireless connectivity, wireless bandwidth on the computer connecting wireless router will never reach the actual fibre broadband speeds. The user will therefore not be able to enjoy the full speeds which he purchased for.

In this article, we will set up a new wireless infrastructure with Wireless AC standard within a typical 5-room HDB flat apartment. We will make our comparisons between the signal strength, wireless internet bandwidth and local area network connection wireless bandwidth between Wireless N and Wireless AC Technologies.

First look at the Wireless AC Products from ASUS

ASUS is probably the first manufacturer in the market to have a full range of Wireless AC product for sales. All the products are already ready for purchase at major retailers and shops in Sim Lim Square/ Funan Digitalife Mall. 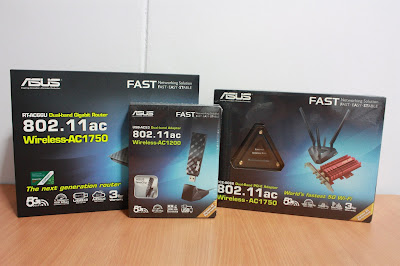 ASUS RT-AC66U is the first full Wireless AC1750 Router from ASUS. It is a dual band router, which means that it will operate at both 2.4GHz and 5GHz at the same time. Theoretical speeds can even go up to 1.6Gbit/s on this router.

This router is rated to perform. It is claimed to be 3 times faster than usual Wireless N. Besides that, this router can be connected to ASUS AiCloud to enable easy file storage to the free cloud provided with the purchase of the router.

Other than the physical router, the package also contains other accessories that could be useful. ASUS included 2 more adaptors in the box to ensure that the router will work even if the user is bringing it overseas. It is installed with a UK adaptor and also includes a Europe and Australia/China one if you intend to visit those countries.

RT-AC66U has got all major features that a flagship consumer router should have. It has got 2 USB ports for 3G, File or Printer Sharing, 4 Gigabit LAN ports to make sure that all wired connections run at Gigabit speeds to prevent any bottlenecking and also antenna interface. 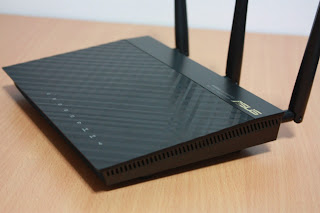 ASUS RT-AC66U continues to capture consumers’ hearts with their famous black diamond design. It is definitely a router that will look good in your living room with such a sleek design.

ASUS USB-AC53 is the market’s first ever 802.11ac USB dongle. It can reach speeds that even saturates its own USB 2.0 interface at 480Mbps.

As simple as how it may seem, simply plug the ASUS USB-AC53 into the computer and install the drivers to let the Wireless AC dongle do its magic. It also comes with a clip that can be clipped onto the screen of the notebook or tablet. This dongle beats any other dongles on the market hands down without any competition.

The USB-AC53 also follows the same design details as the RT-AC66U and shines in terms of both performance and aesthetics. 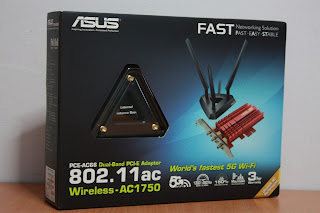 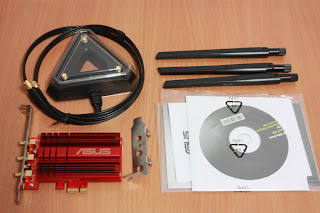 Within the box are 3 antennas, an antenna extender, a low profile adaptor, Driver CD, Quick Start Guide and Warranty Card. 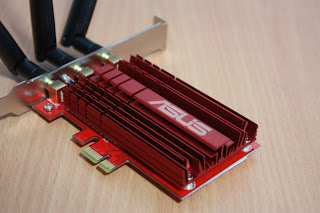 This PCI-E Wireless AC Network card is equipped with an overkill red heat sink on top of its network chip. 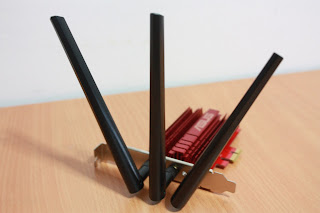 Three long antennas are attached to the card to make sure that wireless signal can be received even from far. 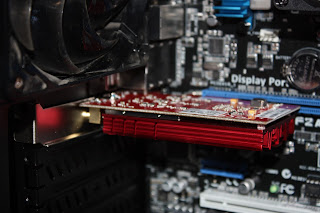 Just like any other network card, simple slot the ASUS PCE-AC66 into any PCI-Express slot and the card will work after installation of the drivers.

Firstly, SpeedTest.net was used to test the Internet Speeds of each setup to local SingTel servers. Secondly, Passmark’s WirelessMon was used to determine Wireless Strength to their respective Wireless Router. Lastly, a single 1.4GB file was transferred from a computer connected via Gigabit LAN port on the router and was received from the wireless enabled computer. The average of the transfer speed was then taken down as results.

Based on the results from the different tests, it is obvious that Wireless AC indeed has significant improvements over Wireless N in terms of speeds. The results are clear. If you want to have actual fibre speeds on wireless, either setup on the PCE-AC66 or USB-AC53 will work well. However, if you are signing up for a fibre plan of a higher speed like 300Mbps or 1Gbps, it is still recommended to get PCE-AC66 instead. If not, a wired connection will always be the best. We can only wait for a USB 3.0 version of the Wireless AC dongle to be available on the market before we are sure that speeds above USB 2.0 bandwidth can be sustained. However, if you’re using a relatively slower Fibre internet plan like mine at 100Mbps, the USB-AC53 works perfectly well. You can save a few bucks with this option as well.
All the 3 Wireless AC network components can be purchased at IT SHOW 2013 at promotional prices. If you are planning to upgrade from a Wireless N setup to a Wireless AC setup, this could be a good opportunity for you to do so.