BlackBerry 10 will be available in Singapore from 7th March 2013 onwards. Local Telcos are already getting pre-orders and special deals done for BlackBerry 10. BlackBerry Z10 comes in both Black and White for the Singapore market and retails at SGD$918. No BlackBerry Plan (BIS) is required. Any generic smartphone data plan will work on the BlackBerry 10 devices. 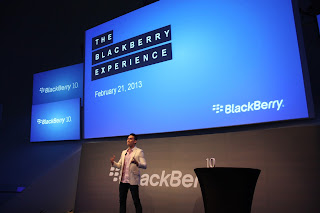 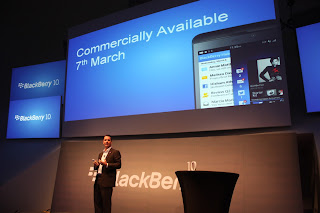 The Press Conference started with a overview and introduction of the new mobile operating system from BlackBerry by their Singapore Country Director, Charles Dufourcq. As “The Welcoming Hand of Singapore” welcomes the new platform to our country, it also brings a new phone to the market. The BlackBerry Z10 will be sold at all major telcos later on 7th of March and will not require any BlackBerry Internet Service(BIS) plans anymore. Consumers can just sign up for their traditional data plans i.e. SingTel’s FlexiPlans, M1’s Surf+ and StarHub’s SmartSurf plans for the Z10.

Charles later went on to show how fascinated he was by Z10’s Story Maker Application, which seamless allows the creation of video and photo montage. Story Maker is pre-installed on the BlackBerry 10 devices and can be used for free.

Senior Director of Asia Pacific for BlackBerry then went through all the different features of the BlackBerry 10, including BlackBerry 10’s unique user interface, the BlackBerry Hub, the seamless touch keyboard and even BBM video with Screen Sharing. From his presentation, we were assured that BlackBerry 10 is indeed a complete current day smartphone operating system… and perhaps even better than expected. Beautiful, Social, Integrated. That’s how BlackBerry brands BlackBerry10.

At the end of the session, there was an Q&A Session which allowed us to know the actual suggested retail pricing for the BlackBerry Z10 for Singapore, that is SGD$918. The Z10 will also be available at neighbourhood electronics and computer stores such as Courts and Harvey Norman, sold without any telco plans. We also discussed about the proposition of BlackBerry10 devices as compared to flagship smartphones from other platforms as well as the more technical end of BlackBerry Services that are rolling out to the different markets in Singapore.

Besides the launch of the new Operating System and smartphone, BlackBerry is also celebrating their 10th Anniversary of presence in Singapore. Singapore is a hub for BlackBerry executing their Asia Pacific administration and this years marks a year of new beginnings for them. We’ve seen a lot of changes in their product offerings ever since RIM stepped their foot on our land. There were ups and downs, but the BlackBerry 10 is finally here to resurrect the company and lay the grounds for restoration of their former glory. 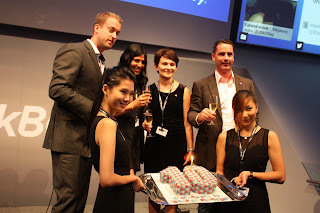 We would like to wish BlackBerry and their new BlackBerry 10 OS a huge success. As a developer myself, we have gotten tremendous support from the Developer Relations Team at BlackBerry Singapore, far beyond anyone would actually imagine. For their commitment and believe in the new platform, I’m sure that BlackBerry 10 will take off in Singapore and that there will be more 10 year celebrations to come. Happy Birthday BlackBerrySG!

If you missed out the Press Conference, check out the video here to watch the whole 1 hour 15 min video on the press conference.