BlackBerry 10 up-and-coming. Singapore Developers feeling the love
With BlackBerry 10 launch just 2 months away from now, we are literally counting down day by day to the actual launch date – 30th January 2013. Meanwhile, developers are already hard at work to get their BB10 applications on the platform even before the platform launch.
Singapore BlackBerry10 developers get their love from RIM. In a conversation with Justin Lee from the Developer Relations team for RIM at Jam Asia 2012 held at Bangkok, I was told that BlackBerry will be proactively building up a stronger developer community presence in Singapore. There will be many upcoming activities, hackathons and workshops targeted specifically for the local community. At the same time, Singapore will not be missed out for BlackBerry’s global activities.
For a start, BlackBerry hosted the first JamHack event in Singapore on the 12th October 2012 to gather developers within Singapore who were excited about the new BlackBerry 10 platform. The 40-hour long hackathon resulted in the production of many interesting and useful applications for the platform. The winner of the hackathon , TiamYang from Tyler Projects, walked away with a BlackBerry Playbook, a BlackBerry Smartphone and a BlackBerry 10 Dev Alpha device. Additionally, he represented Singapore at Jam Asia 2012, competing with other developer groups around the region.
At Jam Asia 2012, Sarim Aziz, Manager of Developer Relations Business Division at RIM informed us of some of their plans for the Singapore BlackBerry developer scene. Initially, Singapore did not have a developer group for BlackBerry and RIM has just registered a new developer group a few months ago. Led by Arul Kumaran who was previously an Adobe Community Champion, Arul aims to bring BlackBerry’s Developer Community in Singapore to greater heights, encouraging local developers to create more interactive and rich applications for the new platform. Interested local developers can join the Facebook Group at https://www.facebook.com/groups/BBDevSG/

Also announced at Jam Asia 2012 was an 8 city wide Game Port-a-Thon. This event will reach Singapore on the 6th December and will be held at Games Solution Centre , 71 Ayer Rajah Crescent #04-01, Singapore 139951. Interested developers can get more information or sign up at http://www.blackberryjamhack.com/gotgame/ RIM will be giving out USD$100 to over USD$2,000. per game ported.

On the coming Friday, 7th December, the BlackBerry Singapore Developer Group will be having a meeting where the Winner of Jam Hack 2012 Singapore, Tiamyang will share his experience building his HTML5 game, Drop Zone for BB10 and what he learned from Jam Asia. Besides that, Justin Lee will be giving updates on BB10 and the opportunities for Web, Native, AIR and Android Developers. It will be held at HackerSpace from 7.30pm to 9pm.

Globally, RIM has also announced Built for BlackBerry certification program for Applications submitted to App World by 11th January 2013. Apps with the Built for BlackBerry program designation will signify to customers a higher level of quality. With a crowded app market, this designation may increase the chances of your app being downloaded.  For more information, visit https://developer.blackberry.com/builtforblackberry/documentation/overview.html 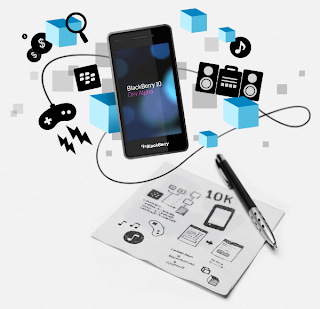 On top of Built for BlackBerry program, all approved applications certified through Built for BlackBerry will be eligible for the 10k Developer Commitment. If you earn a minimum of $1,000 USD on your app over 12 months and you comply with the 10k Developer Commitment Terms and Conditions, RIM will pay the difference between your earnings and $10,000 USD for that application. Visit https://developer.blackberry.com/builtforblackberry/commitment/   for more information.

Other than all the goodness that RIM is pouring on developers, RIM is also offering a free Trade-up of the BlackBerry Dev Alpha device to a Limited Edition BlackBerry 10 device when BlackBerry 10 launches. https://developer.blackberry.com/limitededition/

It’s not the end

It’s the first time we are seeing RIM trying so hard to get developers to develop on their new platform. RIM is all out with BB10 platform and literally throwing money at developers to make sure that the platform has apps on it. I’m confident to say that it’s not yet over for them with all the money and commitment RIM has put into. Just wait and see for yourself when BB10 arrives on 30th January.
Just to make you a bit more interested in the platform, here’s a music video from the BB team.
To watch the whole BB10 keynote recorded at BBJam Asia held at Bangkok, visit our YouTube Page at www.youtube.com/TechRevolutionist

Microsoft TouchDevelop allows you to write scripts anywhere, on all your devices