In the race to have the most feature packed motherboard, many manufacturers are coming out with various innovation to differentiate their products. In the past, we saw audiophile quality audio processors embedded onto motherboards, adoption of USB3.0/SATA 6Gbps and recently, the race for adoption of Thunderbolt interface. In case you are not familiar with Thunderbolt, it’s a new interface invented by Intel which was first featured in Apple’s Macbook Pro. It boasts crazy speeds of up to 10Gbps, bringing the possibilities of connecting bandwidth hungry internal device via an external interface. 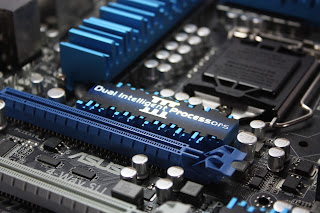 Today, we are going to look at ASUS’s P8Z77-V Premium Motherboard. It stands out from the rest of the Z77 offerings from ASUS because of the thunderbolt port found at the back panel. Targeted at users who require the thunderbolt port for their peripherals, the P8Z77-V Premium also features various innovative add-ons that excites enthusiasts. It’s an all-rounder, a good choice for those who want the best of the best for a mainstream build and also to future-proof their build by getting ready for the surge of Thunderbolt enabled devices in the near future. 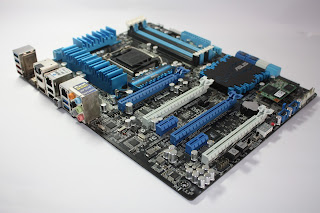 ASUS P8Z77-V Premium supports 4-way SLI. They have included a 4-Way SLI Bridge in the package to ensure that power users have got what they need. Additionally, a 3.5″ USB 3.0 front panel is provided for system builders to hold 2 front USB3.0 ports. Besides that, a padded ASUS IO shield that is made in its way to prevent vibration noises and other electrical interference has always been an all time favourite to builders. With included 802.11n Wireless Module and 2 wireless ring antennas, the P8Z77-Premium is indeed a feature packed motherboard. There is really nothing else you can expect with the current day’s feature offerings.

At the back panel area, 4 USB 3.0 ports are found, plentiful in today’s standards. There’s also 2 eSATA 6Gbps ports, ensuring that newer SSDs which saturate the speeds of previous SATA 3Gbps is covered and will not bottleneck. Of course, a thunderbolt port is found next to where the Wireless Module is place that makes the board of “Premium” category. As for display output options, there’s standard sized display port and a HDMI out. Dual Gigabit Ethernet will probably be the best friend for those who plans to build a server on the P8Z77-V Premium. Furthermore, these Gigabit Ethernet interfaces are backed by Intel’s Network Controllers. In simpler terms, it means higher throughput and better performance. 7.1 Audio is supported on this motherboard with a common ALC898 chip from Realtek. Not forgetting to mention, there’s also a SPDIF Optical Out too. Lastly, ASUS engineers included a ClearCMOS button at the back IO Panel for the ease of users if they needed a BIOS reset.

Storage is one of the most important aspects of a motherboard, especially if you’re building a file server. Luckily, the P8Z77-Premium has got an access number of SATA ports onboard, allowing you to connect up to 9 hard drives. However, 3 of these ports (light blue) are of of slower 3Gbps interface. It could be insufficient if you are connecting SSDs to these ports, but any hard drives on the market have yet to max out 3Gbps speeds and will work well on them. The Navy blue ports runs off a Marvell 9230 controller, which also enables ASUS SSD Caching II which will be covered later. 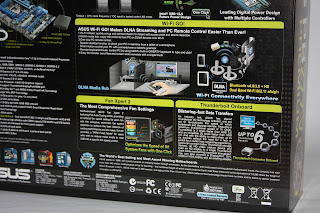 Fan Xpert2 enables users to easily tune their fan speeds according to their needs. Fan Xpert 2 can also tune the fan speeds automatically if specified by the user. Under different external factors such as CPU temperature and etc, custom fan settings can be defined. Different modes can also be set to the user’s preference, whether if it is cooling performance or noise limitation as a priority.

Other than providing Wireless capabilities with an added-on module for the motherboard, ASUS also included a software for the motherboard for even more features. Different systems are finally integrated  with Wi-Fi Go! Software. Now, with Wi-Fi Go!, users can control their PC from other devices like their tablet PCs, or they can even play DLNA streams from their media servers, anywhere within the same network! Talk about convenience and versatility. One can freely share content between all networked device seamlessly with Wi-Fi Go! software. Other features like Remote Desktop/ Remote keyboard/ Remote Mouse are also included within the software suite. 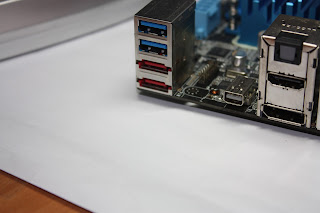 As mentioned, onboard thunderbolt unlocks the motherboard capabilities to its fullest. External Graphics Card enclosure, External SSD enclosure, etc. These are innovations which are already available on the market to show off thunderbolt’s full prowess. With the inclusion of thunderbolt on the P8Z77-V Premium motherboard, the possibilities of expansions are limitless.
﻿ 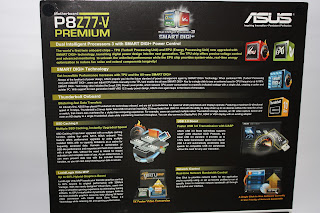 ASUS motherboards are well known for their enhanced digital circuitry. Stable voltages and currents across the board is what makes ASUS motherboards so stable and reliable. These stability features are enabled by 2 onboard hardware processors, namely the EPU(Energy Processing Unit) and TPU(TurboV Processing Unit). Co-operatively these Dual Intelligent Processors aim to optimise the entire PC, balancing power use with performance across the CPU, chipset, memory, graphics cards, hard drives and system fans. Because they are made as hardware not software, all this can happen without requiring user interaction and without the expense of CPU cycles, system resources and with any OS or virtualised environment. What it means to you? Higher overclocks / stable and reliable system / energy efficient system.﻿

4 navy blue ports provided by Marvell 9230 controller enables ASUS SSD Caching. System building can mix and match their storage setup for performance with these 4 ports. Because of the flexibility of the software, you can have any number of hard drives or any number of SSDs on these 4 ports, and ASUS SSD Caching will optimize the performance of IO through the SATA interfaces automatically, without much setting up. For example, you can have a single hard drive and a SSD for a simple caching, or 2 hard drives and a SSD which caches both drives. Any configurations is possible. Of course, caching only takes place if you have one or more SSD.

To put it simply, USB 3.0 Boost increases the transfer speeds of data tremendously. Transfers comes in 3 different modes, each differing protocols to have different performance effects.
UASP Mode: dedicated to new UASP devices for max performance with the latest specifications. 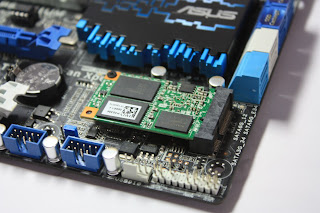 An onboard 32GB m-SATA SSD is found onboard. Connected via Z77’s SATA 3Gbps interface, this also means that Intel Rapid Storage Technology (IRST) features are also enabled. System builders can choose cache their system with this 32GB SSD with IRST, significantly increasing the performance of their PC.

The SSD found onboard is a Liteon LMT-32L3M, based on a Marvell 88SS9174 controller. Benchmarks of the SSD will be found at the Benchmark section.

Upon venturing into UEFI BIOS Settings and setting voltages and clocks, I decided to allow the motherboard to set itself to its optimal mode by setting “AI-Tuner” to auto. With this settings, the system automatically overclocks itself to 4.2GHz, essentially a 20% increase in clocks! These settings are proved to be 100% stable. There were no crashes or any sort of blue screen during benchmarking, again proving the P8Z77-V Premium to one hell of a performance motherboard.
ASUS P8Z77-V Premium Motherboard
Intel Core i7 3770K@ 4.2GHz
F3-12800CL7D-4GBECO (2Gx2) RAM
Corsair HX620 PSU
ECS nVidia 9800GT
DeepCool CPU Cooler
Fujitsu MHZ2160BH HDD
Windows 8 Pro 64bit

With the same controller as a Crucial C300, the Liteon SSD performed similarly to it. Taking it as a caching SSD, it’s pretty decent, and probably just nice for it’s SATA 3Gbps interface. On AIDA64 Read Test Suite, it sustained above 250MB/s soeeds. Although not as fast as current days OCZ Vector or Samsung 840 Pro, it’s the best bet on a SATA 3Gbps before bottlenecks take place.﻿

For a stock performance before any tweaking, AIDA64 memory benchmark gave somehow unsatisfying results. Memory read was at 17799MB/s , write was at 20368MB/s and copy was at 19198MB/s with latency at 41.7ns. However, taking this as a baseline for further memory tweaking and overclocking, huge performance gains were noticed. ﻿
﻿

To show the extreme performance gains and stability with overclocking on this motherboard, the results before and later were taken and then compared in percentage gain.

We overclocked the Core i7 3770K to 4.6GHz just to show how much improvements we can get on SuperPI32M without any other tweaking to the other parts of the system. In the end, the difference was 37seconds lesser than the one which ran at 4.2GHz. This means an 10% increase in performance, just with SuperPi32M benchmark. Additionally, 4.6GHz clock on the i7 was not easily done without the dual intelligence processors on the motherboard which babysitted the i7 3770k throughout its torture ordeal.

Tweaking RAM on P8Z77-V Premium has never been this easy. I easily set the frequencies on the GSkill Eco to 2060MHz, and increased the timings to ensure stability. I was able to run AIDA64 again and results were astonishing. On average, there was an average 23% increase in memory performance. 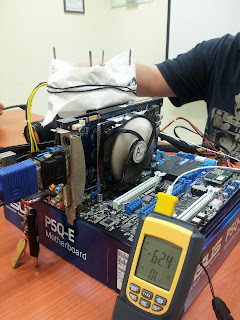 With a little bit of Dry Ice, the highest clock on the i7 3770k with P8Z77-V Premium motherboard was a decent 6GHz, breaking my personal record for CPU Frequency. 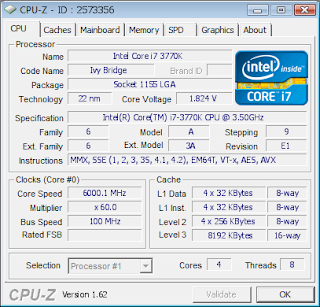 To run benchmark at a stable speed, I downclocked the processor to run SuperPi and wPrime. 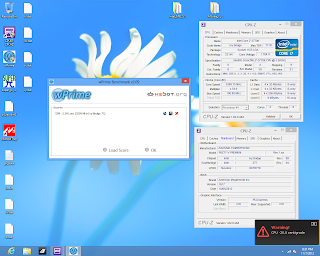 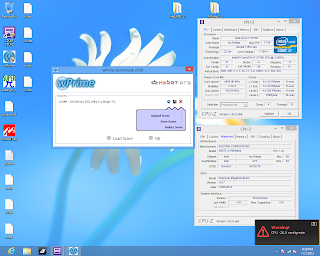 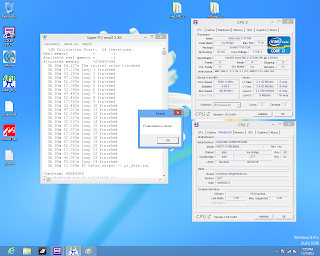 On the other hand, SuperPi, being a single threaded application, is more stable at higher frequencies because it only makes use of 1 thread for processing. Score? 6min 12.034s, more than 1 minute lesser than a previous air overclocked run at 4.6GHz. This setup was ran at 5.8GHz.﻿

P8Z77-V Premium is also a feature packed motherboard. Rarely on mainstream series(Non-ROG) motherboards we can see built in Wireless Network cards which is found on the P8Z77-V Premium. Besides that, all the goodness of USB3.0 is also built in at both front and back panels. Most importantly, there is thunderbolt interface which could be a huge deciding factor for consumer purchase decision making.

P8Z77-V Premium lives up to ASUS’s stability and reliability reputation. I had a smooth overclocking experience on this motherboard and the 6GHz personal record was only possible with the use of ASUS’s AISUITE software which allows CPU tweaking on the fly in the OS. I have always no issues overclocking on any ASUS motherboard and am even more assured with its beefy 20phase power phase that brings overclocking to the next level. Not forgetting the Dual-Intelligence Processors which made all these possible.

However, the only downside of this premium motherboard is that it also comes in a premium price. The P8Z77-V Premium costs a crazy 689SGD which will probably deter most from getting their hands on this board. In fact, it costs more than any of ASUS’s top of the line ROG series motherboard. However, if thunderbolt interface is what you really need, the P8Z77-V Premium could be a good “investment”.