Previously, we were discussing about how touch screens are taking over the world and that the trend in technology is moving towards a more humanized interaction with computers. There have been new technologies out on the market which aims to research into computer interaction, such as OCZ’s NIA but it did not really take off. Microsoft also came up with the Kinect, which was way more popular and gained worldwide acceptance, welcoming Motion Sensors into the gaming community.
Motion Sensors can do so much more than just being used for games. Many applications can make use of motion sensors for various ways of communication with a device/computer. The area is still under development, probably because of the the high price of the hardware. Even so, fear not as ASUS developed their own Motion Sensor for the PC as well, giving developers and gamers a wider choice.
ASUS Xtion Motion Sensor is made for the PC. The set we are reviewing is a “Vanilla” version, which means that it is made for end-consumers, not developers. This also means that SDK is not included. 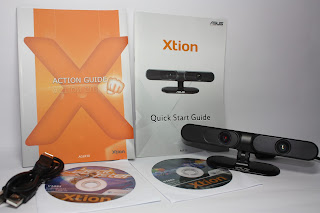 Included Accessories and Guide Books
What is found inside the box is what you need to get started. The Xtion connects via a standard USB cable and drivers are installed when you install one of the games on the PC. The Action Guide is essential if the user wishes to do more with the Xtion kit, such as using the “Mouse” mode to make body gestures into mouse actions. 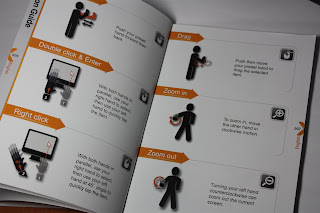 Control your mouse with Xtion!
Although Xtion will provide a much better experience browsing the internet, it is not sufficient. It does not make sense to replace the keyboard with Xtion Motion Sensor as typing on the on-screen keyboard is almost impossible using body gestures. If you’re browsing photos or viewing YouTube videos, these gestures can really make life easier. It works very well in a living room and it’s an interesting technology to show off to your friends and relatives. 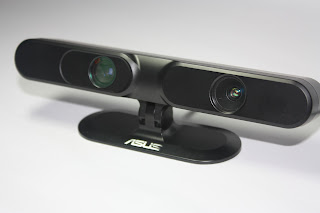 Xtion Motion Sensor Controller
Similar to the Microsoft Kinect, the infrared sensor is found on the left of device, while the camera is on the right. The placement of the device is crucial for optimal gaming experience. The camera should be able to see the whole body from head to toe as some games require. 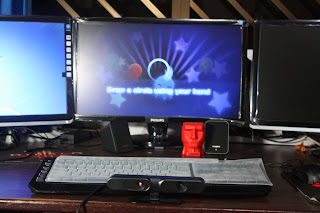 The setup
I met with some issues while setting up the Xtion Motion Sensor. Firstly, the room must be big enough and items obstructing the camera view should be removed. Other than that, it’s a simple plug and play affair.
Comparing the Xtion and Kinect, there aren’t many differences in terms of hardware, but Eyefinity is not supported on the Kinect. After installation of the games and putting my desktop to Eyefinity mode, a 3X1 setup worked perfectly well. Currently the games available are all in 2D but more games can definitely be developed to take advantage of the Xtion.
In conclusion, I feel that the Xtion is a great device, but due to lack of game titles available compared to the Microsoft Xbox Kinect, gamers will still much prefer the Kinect. However, if you’re looking at a more all-rounded device, the Xtion Motion Sensor is a better choice, especially with its ability to interact with the PC seamlessly in the “Mouse Mode”. Not forgetting the ability to play motion enabled games in Eyefinity, it could be a plus point with gamers who already have an Eyefinity setup. Developers will love the device as it opens them up to many other applications for development.