Bencmarks are the most important in determining the performance of a graphics card. Without further ado let me show you some benchmarks done by the gurus from Tweak Town. 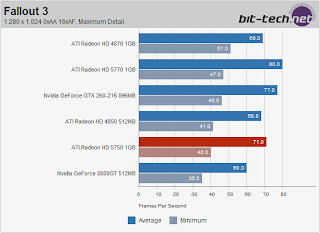 http://www.bit-tech.net/hardware/graphics/2009/11/06/sapphire-ati-radeon-hd-5750-1gb-review/3
There is no doubt that this card falls below the rest of the cards. It is cheaper and has a lower clock and stream processors compared to the rest. The card is meant for gamers who are having a monitor resolution of perhaps 1440 by 900, or 1366 by 768 which are the most common resolutions of monitors ranging from 20″ to 22″. There isn’t a need for too powerful cards like a 5850, and a 5750 will fit in just well to meet the demands of your games.

Backed by a mainstream Evergreen core by ATI, the HD5750 is far more power efficient and cooler than previous generation of cards, the 4XXX series but at the same time performing better than them as well. Putting the technical specifications aside and comparing the different cards from different manufacturers, the Sapphire’s version is definitely something different from the rest. Armed with a black heat sink fan with aluminum heat sink, the Sapphire version of this graphics card stands out from the other standard reference egg shaped cooler. Sapphire is well known for their Vapor-X technology coolers which makes use of the continuous vaporisation of a liquid coolant to cool off the surface of the heatsink which performs really well. Let’s hope that this card will not disappoint us in terms of temperature. http://images.tweaktown.com/content/2/9/2965_25.png
From below the gpu, it has shown that the temperature of the Sapphire HD5750 was a 43.5 deg C which is around 8 degrees lower than the 5770. This also means that there is great overclocking headroom for the HD5750. The cooler for the 5750 has done its work as well, proving to be effective in cooling the CPU core.

Not forgetting ATI Eyefinity technology, this graphics card actually allows you to connect multiple monitors together and play your games and show your desktop as one entity. This means that you can actually play your games at super high resolution and have a panorama view of the game. Do make sure that you have one of the display ports connected to your monitor, if not eyefinity will not work. If the 5750 may be too weak for your eyefinity set up, you’ll always have the chance to get up to 4 of these cards to work together in a ATI Crossfire X setup, giving you more juice from your system for your graphics intensive games.

Ati Stream technology also allows hardware rendering of your videos, which means this card is also meant for professionals who edit and render videos. However, there are a lot of alternative out there which will do video rendering a lot faster and better. It is good that such feature is there as a option.

The price of the 5750 has definitely dropped since it has been released and currently for the 1GB edition from Sapphire, it is just a few dollars above the 200 mark in SGD. If you have some cash to spare, I’ll even recommend the Vapor-X version of the card. Although it may be a little more expensive, you’ll certainly have a card much cooler than reference card and it is definitely worth the buy.

Overall, I think that the ATI Radeon HD5750 series is here to stay. Very competitive pricing compared to counterpart Nvidia(In fact, Nvidia don’t really have any card in this kind of performance range), a good performer for your daily gaming needs and a cool card both literally and aesthetically. Thumbs up for both ATI and Sapphire.