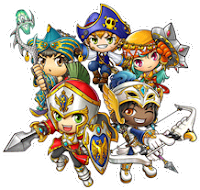 MapleStory is originated from South Korea where the Nexon developers created the game about seven years back. There are two servers in Korea itself, the original server (KMS) and the test server, known as Tespia (KMST). When the developers constantly come up with new updates to the game, they will be tried out by some players in KMST. When the updates are finalised after testing, they are officially implemented in KMS. Few years later, MapleStory started to expand outside Korea. Few other servers that started MapleStory service are such as JapanMS, ChinaMS, GlobalMS, MapleSEA and few others. GlobalMS is mainly for players in North America continent while MapleSEA is for Southeast Asia countries, mainly Singapore and Malaysia. When MapleStory just established in MapleSEA, there is only four classes which comprises of 10 jobs namely: warrior, magician, bowman, thief. This class is also called the adventurers.

There are various towns for the different jobs: perion for warrior, ellinia for magician, henesys for bowman and kerning city for thief. The storyline for each of the jobs is actually the same, just that the job difference is the main point of separation between the jobs. There are three job advancements and the characters can level up to a maximum of 200. However, around less than two years later, there is a fourth job advancement being implemented. The main purpose of this implementation is to kill the boredom of players having only a certain number of attacking skills and grind till much higher levels. The fourth job advancement also made the characters to be more powerful because through each job advancement, characters tend to become stronger due to the new skills that they acquired. Around one year after the fourth job advancement has been implemented, there is a birth of a new job under adventurerers…the PIRATE!!

Warrior is a class which have three jobs namely fighter, page and spearman. The job of fighter will advance into a crusader and then finally to a hero and it normally holds a sword. Page will advance into a knight and then to a paladin which holds an axe. Spearman will advance into a dragon knight and to a dark knight at last and holds either a spear or a polearm. Hero is said to be the most powerful as the job deals the highest damage among the three jobs. Dark knight is a job which attracts a lot of players into creating it because of it having a skill called hyper body. Hyber body allows all the party members to have an increased amount of hp and mp for a certain period of time. Paladin is a job which is claimed to be the lousiest one because of the low damage they deal.

Magician is a class which also have three jobs namely fire/ poison wizard, ice/ lightning wizard and cleric. Fire/ poison wizard will advance into fire/ poison mage and then to fire/ poison arch mage. This goes the same for ice/ lightning wizard. For cleric, it will advance into priest and finally to bishop. Mages normally will hold an elemental wand or staff in order to increase the damage dealt. Bishops will hold a normal wand or staff. Fire/ poison and ice/ lightning arch mages are useless due to them consuming a large amount of mp when casting ultimate skill namely, meteo and blizzard. They are also useless because they only deal higher damage when the monsters are fire/ poison weak or ice/ lightning weak. However, for bishops, they are the more favourable job in the whole of MapleStory. This is because of a skill they have called holy symbol which increases the amount of exp gained for a certain amount of time. This skill is of utmost importance to anyone playing maple because given the same amount of time, the exp gained increases than usual.

Bowman is a class which is categorise into two jobs, hunter and crossbow man. Hunter will advance into ranger and then to bowmaster while crossbow man will advance into a sniper and finally to a crossbow master. Bowmaster is a more favourable job as compared to crossbow master although both jobs are almost the same. This is because bowmaster has a skill called storm of arrow which allows the character to fire arrows at a tremendous speed which will mean that huge amount of damage can be dealt to a monster over a short period of time. Comparing crossbow master, it only have a skill which is more powerful than storm of arrow called snipe. Snipe when being casted, deals a huge amount of damage to a monster. However, there is a cooldown time before the skill can be casted again.

Thief is a class which comprises of two jobs, assassin and bandit. Assassin will advance into hermit and then into a night lord which uses a claw and shoot throwing stars while bandit will advance into chief bandit and finally to a shadower which uses either a dagger or cutter. Night lord is a more favourable job as compared to shadowers as it is said to deal the highest damage per second on a monster as compared to any other job. This attracts many people into creating one because the job is quite powerful. Shadowers are not so likeable by people because it consumes a lot of mesos (MapleStory’s currency) in order to receive less damage from monsters. Some people may think that this will result in a loss rather than a gain if they were to create a shadower.

Pirate is the last class which also have two jobs, infighter and gunslinger. Infighter will advance to a buccaneer, then to a viper and holds a knuckle. Gunslinger will advance into a valkyrie and then to a captain. It holds a gun of course. Of these two jobs, viper is considered the more better off job because of the high damage it deals, especially when under a certain type of transformation. Captain is not so welcomed because of the seemingly low damage.

Tutorial: How to change your User LogIn Background on Windows 7?