GeForce Gamers are Game Ready for ‘Marvel’s Guardians of the Galaxy’ with NVIDIA DLSS & Ray Tracing, Plus 11 more great games!

When Marvel’s Guardians of the Galaxy is played on PC, players can experience the game at up to 8K HDR, with higher levels of detail and uncapped frame rates, and all the other benefits of the PC platform, such as ultrawide, multi-monitor and variable refresh rate G-SYNC gameplay. For the definitive experience, play Marvel’s Guardians of the Galaxy on a GeForce RTX desktop or laptop, with RTX ON. Graphics are next-level with ray-traced transparent and opaque reflections, and performance is boosted by up to 2x with NVIDIA DLSS.

As a special bonus, GeForce RTX gamers can unlock Star Lord’s Sleek-Lord Outfit from the start of the adventure with GeForce Rewards.

NVIDIA’s recommended specs will tell them if they are ready to rock on October 26:

Chivalry 2 Gets a DLSS Upgrade Today – 4K with Max Settings for All GeForce RTX Gamers!

Another important aspect of NVIDIA Game Ready drivers is that they are often used as a delivery mechanism to add new features for our GeForce users. This Game Ready driver adds NVIDIA DLSS support for Torn Banner Studios’ Chivalry 2, an incredibly entertaining 64-player PvP melee slasher multiplayer title. Today, Chivalry 2 gets a performance upgrade by introducing NVIDIA DLSS in a new update that boosts performance by up to 45% and allows all GeForce RTX gamers to play at 4K at over 60 FPS, with max settings enabled. 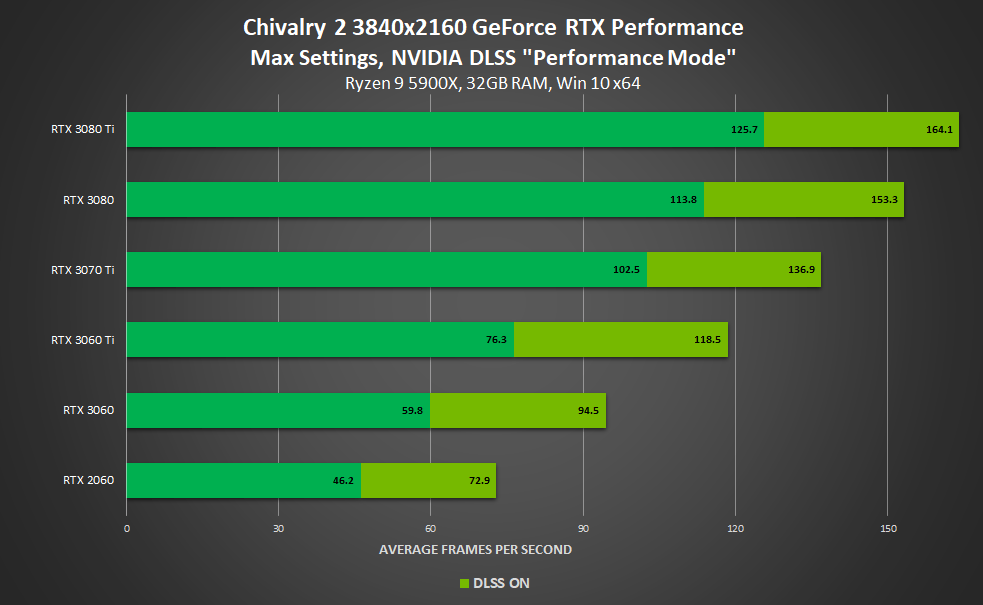 Check it out in action in our new Chivalry 2 NVIDIA DLSS video.

The NVIDIA Game Ready Driver for Marvel’s Guardians of the Galaxy also adds other features, including:

Available on or before launch day, NVIDIA Game Ready Drivers provide the best experience for GeForce gamers because NVIDIA engineers work up until the last possible minute to optimise performance and perfect gameplay. And as an additional verification of quality, every Game Ready Driver is WHQL-certified by Microsoft.

A look at the BIOSTAR Z690 VALKYRIE Motherboard