At NVIDIA’s GPU Technology Conference 2020 (GTC 2020), the company announced a slew of advancements in AI technologies. In order to make AI development more accessible to everyone with an interest, NVIDIA also announced their latest NVIDIA Jetson Nano 2GB developer kit. Priced at just USD59, anyone who’s interested in AI development can simply purchase this kit and understand what it takes to build an AI based application.

For someone who is simply interested in getting started, NVIDIA also announced the new Jetson AI Specialist and Jetson AI Ambassador Certification and Course. The course is totally free, and can be completed by anyone with basic familiarity with Python and Linux. You will also need the Jetson Nano (or any other Jetson) developer kit to complete this course. There’s simply no excuse for anyone interested in AI to complete this course.

The NVIDIA Jetson Nano 2GB Developer Kit comes in a a very simple package. Inside the box, you will only get the developer kit Single Board Computer itself and nothing else. So, do keep in mind of other things you will need to get started with this developer kit.

Minimally, you will still need a MicroSD Card of 32GB and larger (64GB recommended, Class 1 and High Endurance preferred), and a 5V3A power adapter. These things are not included in the box. 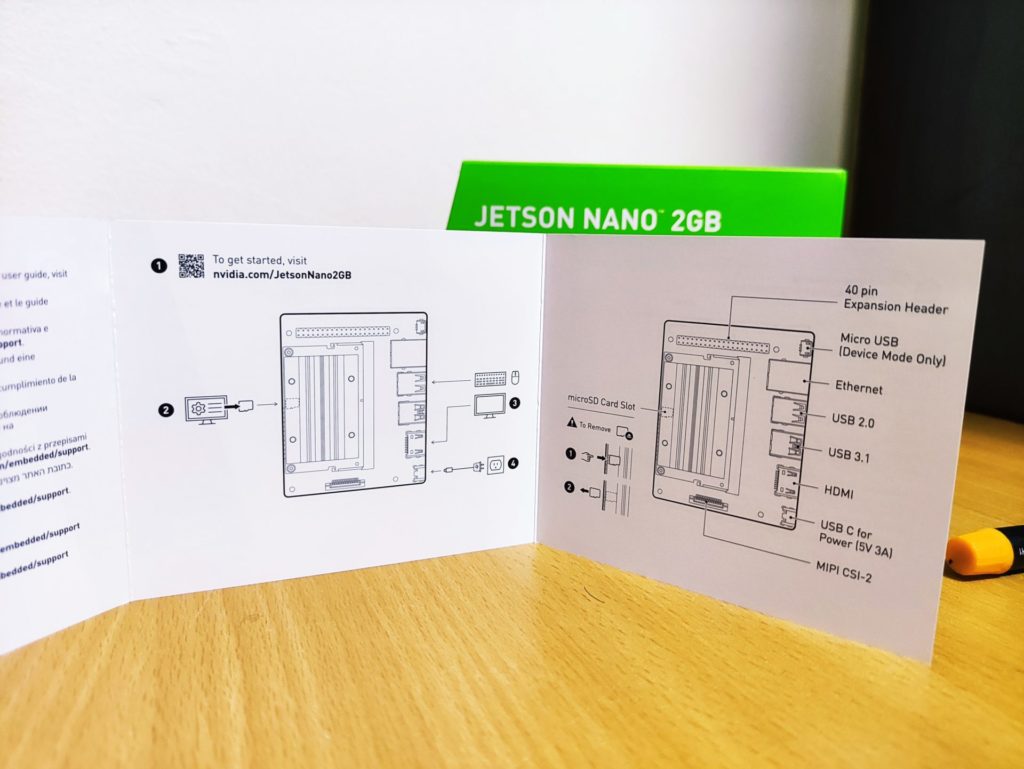 NVIDIA also kindly included a quick start guide. While they have mentioned that the Jetson Nano 2GB and Jetson Nano 4GB are completely the same in terms of specifications, other than the difference in RAM capacity, the daughter boards are quite different. 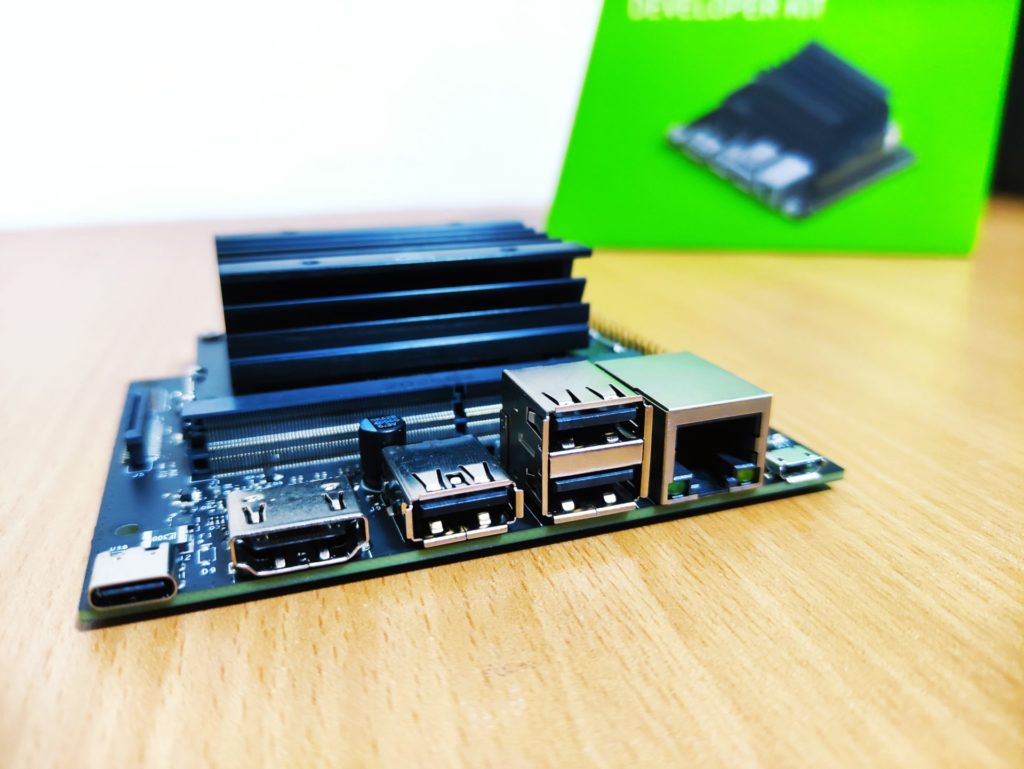 To reduce the cost of the developer kit from 99USD to 59USD, NVIDIA had to do away with some of the ports and features on the daughter board as well.

To iterate the main differences on the daughter board on the 2GB version,

Practically speaking, unless you are running an application that requires that many I/O interfaces on the original 4GB Developer Kit, the options on the 2GB Developer Kit should be more than sufficient. Most of the times, two of the USB ports will be used for your keyboard and mouse or other peripherals, so there isn’t a need for high bandwidth provided with USB 3.0 interface. Also, it’s rare to see developers use more than a camera for a single board computer, so reducing the MIPI CSI-2 camera connector to two to one makes sense too. We do think these these changes to the daughter board to make the overall product more affordable is sensible and justified.

In order to get started with the NVIDIA Jetson Nano 2GB Developer Kit, you simply have to visit the official site at https://developer.nvidia.com/embedded/learn/get-started-jetson-nano-2gb-devkit. The step by step instructions are extremely clear and easy to follow. You should be able to get everything set up within half an hour.

The SD Card image for the Jetson Nano 2GB Developer Kit is currently available on the Getting Started website. Alternatively, here’s the direct link to the image.

Once the image was flashed to our MicroSD Card, we simply had to pop the card into the Jetson Nano, and the system boots up as expected.

NVIDIA made it very easy to run inference benchmarks on their products. We wanted to find out if there’s any key performance difference between the 4GB and 2GB version when it comes to inference processing. For more information about the benchmark utility used, you can visit https://github.com/NVIDIA-AI-IOT/jetson_benchmarks 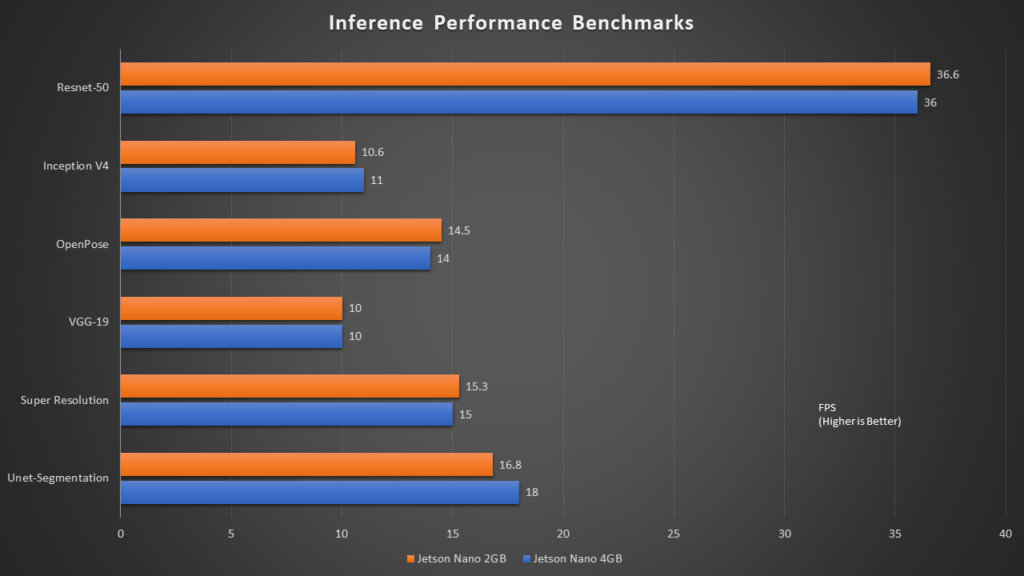 No doubt, the Jetson Nano 2GB Developer Kit made AI development more accessible to anyone interested. Their commitment to the development of AI for the future is also apparent. With the establishment of Deep Learning Institute, and even having free courses to get people started with AI development, we can see how the company wants to do their part to have more computer scientists in this field. Moreover, as the Jetson platform has already been around for quite a number of years, the support and resources on the Jetson Nano online is also very comprehensive.

Priced 40USD cheaper than the original Jetson Nano 4GB Developer Kit, the new 2GB version is a great choice for anyone who is interested in getting started with AI development. We’ve also found out that there is no difference between the performance of the 4GB and 2GB version when it comes to AI inference performance, which is what the Jetson Nano is meant to do as an edge device.

In the past, developers have choices to make if they want to choose a Single board computer for development. With the introduction of the Jetson Nano 2GB Developer Kit, NVIDIA has just made it much easier for developers to make the decision. Forget about the Raspberry Pi, which has gotten more expensive with the introduction of its new versions. The Jetson Nano 2GB is a serious contender and a definite choice for anyone who wants to work with real world AI applications.