Vivo is a brand that focuses a lot on smartphone innovation. With their NEX product line-up, consumers can always expect interesting features that are unconventional in today’s wave of boring smartphone designs. Not known to many, the Vivo NEX smartphones are also the early adopters of new technologies which will eventually become trends as other companies follow suit. For example, they are the ones who first came out with in-display fingerprint sensors, dual display and even the funky pop-up front-facing camera.

The Vivo NEX 3 is the new flagship smartphone for the brand. In pursuit of the ultimate smartphone experience, the Vivo NEX 3 consists of all the best features of the previous iterations. Let’s take a look at various aspects of this smartphone, and see how these new features fare. 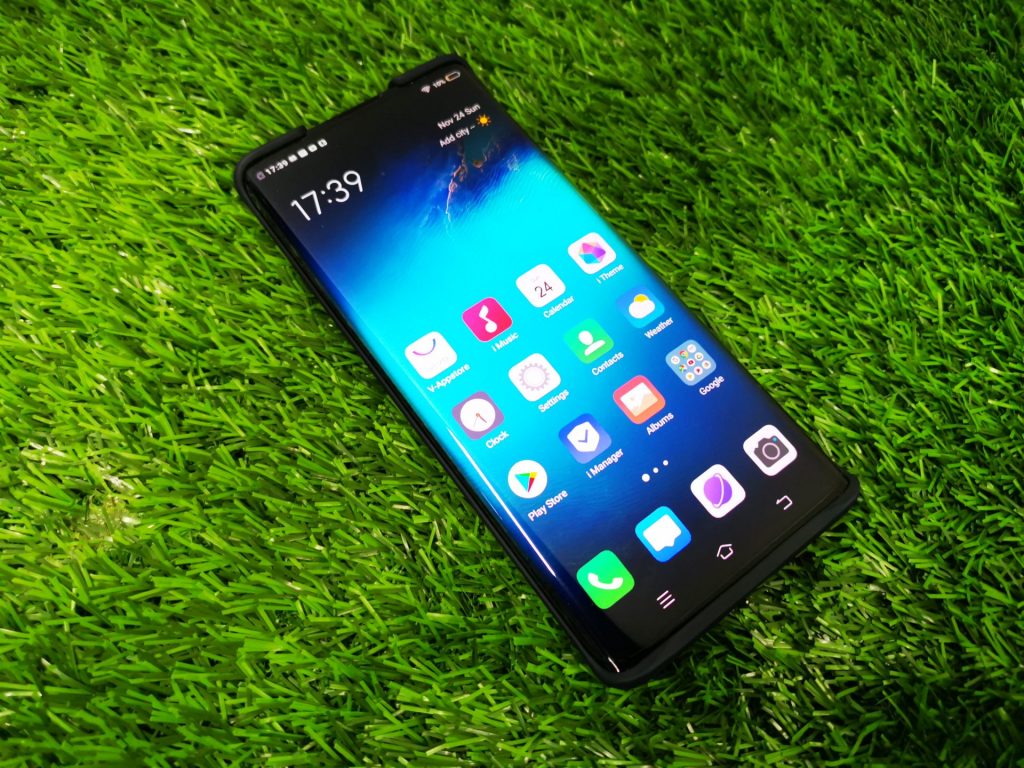 The Vivo NEX 3 is based on the Qualcomm Snapdragon 855+ chipset, which is nothing much other than an overclocked Snapdragon 855. Its performance should be relatively similar any other flagship smartphones in the market.

Interesting, Vivo did not apply for IP splash/water proof certification on the NEX 3. This could possibly be due to some technical limitations of the product, as we also understand that it comes with a 3.5mm audio jack and a moving camera part which houses the front camera. 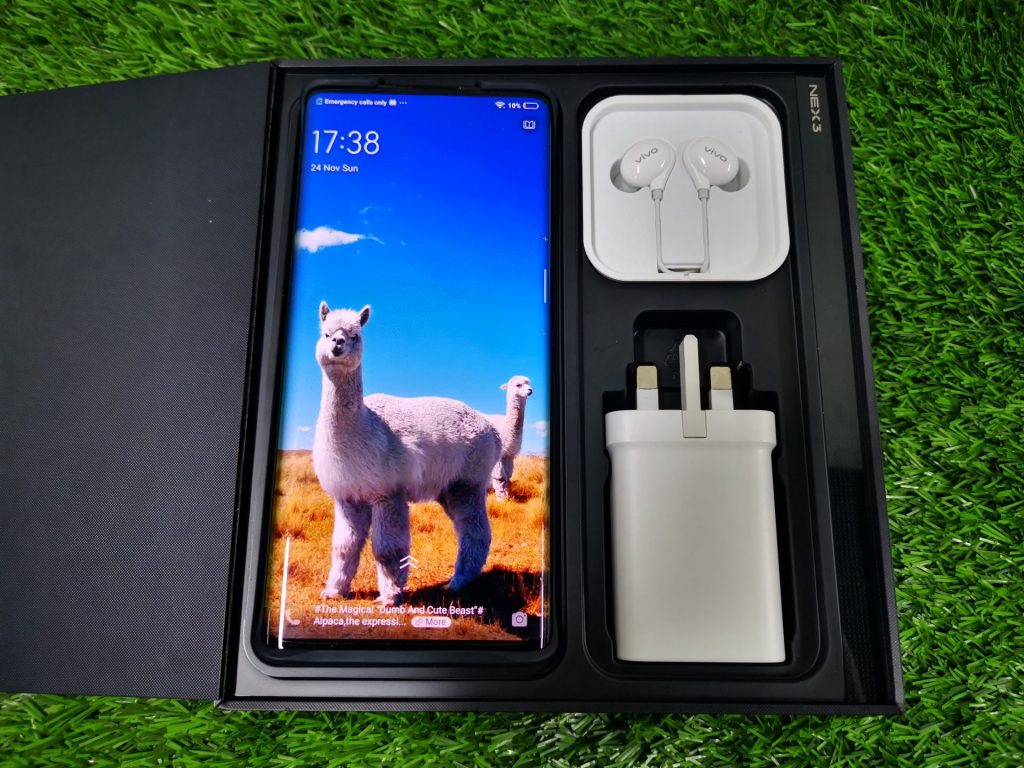 We like the fact that Vivo has included all the accessories for the NEX 3 that we need. The package even includes a bump case which keeps the phone from any damage. We also liked the fact that the phone already comes pre-applied with a screen protector. It’s difficult to find a good screen protector for a smartphone with a curved screen at the edges.

The package also includes charging cables and the power adapter. Even though the Vivo NEX 3 uses a Qualcomm chipset, its charging mechanism does not conform to standard Qualcomm charging standards. Instead, the Vivo NEX 3 only supports its proprietary Vivo FlashCharge feature, which charges as 22.5W. 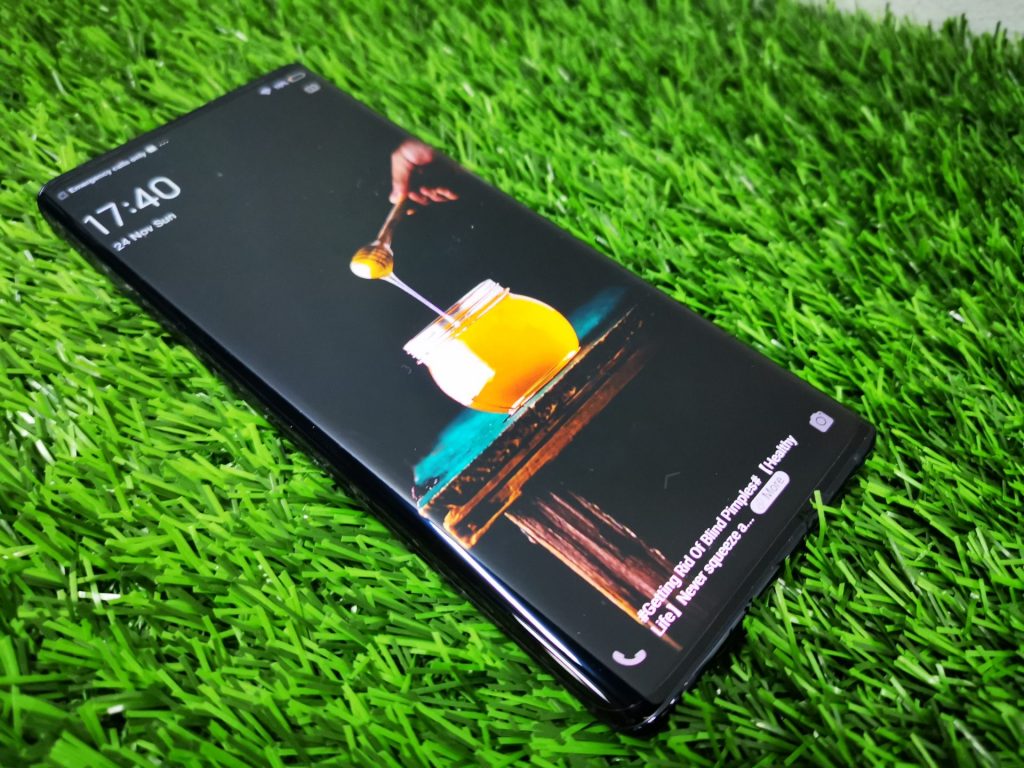 No doubt, one of the key features of the Vivo NEX 3 is its large bezel-less display. In fact, we can literally call it that, as there are no visible awkward notches or holes on the display to make place for the front camera.

The large screen to body ratio also means that the Vivo NEX 3 performs extremely well when it comes to consuming media content. Watching shows on full screen has never been so satisfying. Every single portion of the display can be effectively utilized. With the Vivo NEX 3 in your hands, you are assured with bragging rights. 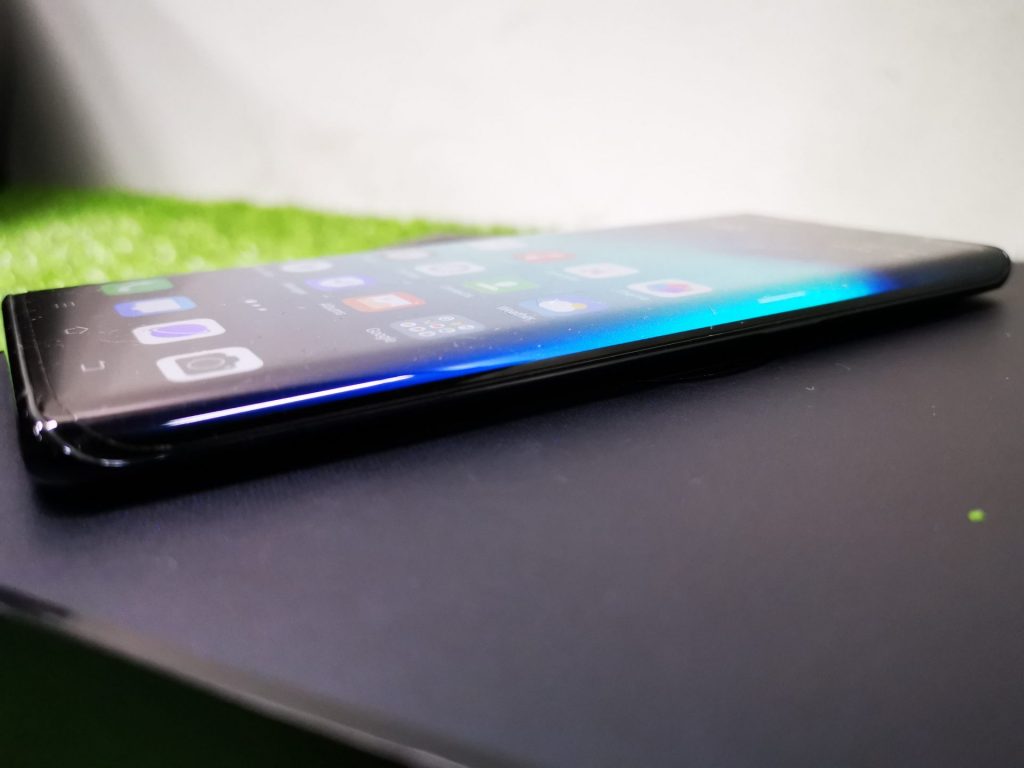 On top of a flawless display on the Vivo NEX 3, we can see that the display even curves onto the sides of the smartphone. This gives a full edge-to-edge display, and gives the phone a really sleek and futuristic design. It’s this kind of unique features that sets the phone aside from any other flagships in the market.

The Vivo NEX 3 is probably one of the first few phones in the market to adopt the halo style camera placement at the rear of the device. Similar to the Huawei Mate 30 Pro, the three camera lens are all placed in a single round piece. Also, to effectively capture photos under different scenarios, the Vivo specially designed the three camera system to adapt accordingly. They are a 64MP f/1.8 lens, a 13MP f/2.2 Telephoto lens and a 13MP f/2.48 Wide-angle lens. 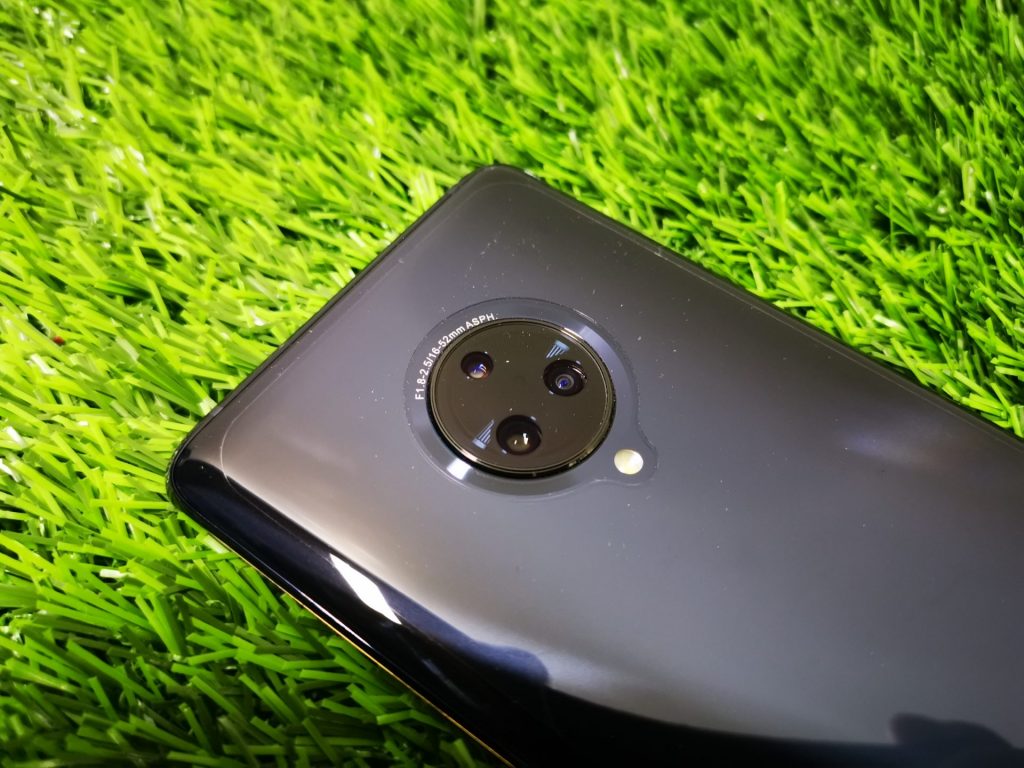 In case you are wondering where the front camera went, Vivo cleverly hid it within the smartphone itself. When the front camera is activated via the camera app, this little camera mechanism will pop up from the phone. This also means that the Vivo NEX 3 won’t be limited by the size of the front camera. This is how they managed to fit a large 16MP f/2.09 lens on the front camera unit. We’ve got to say, it manages to take selfie photos quite well. 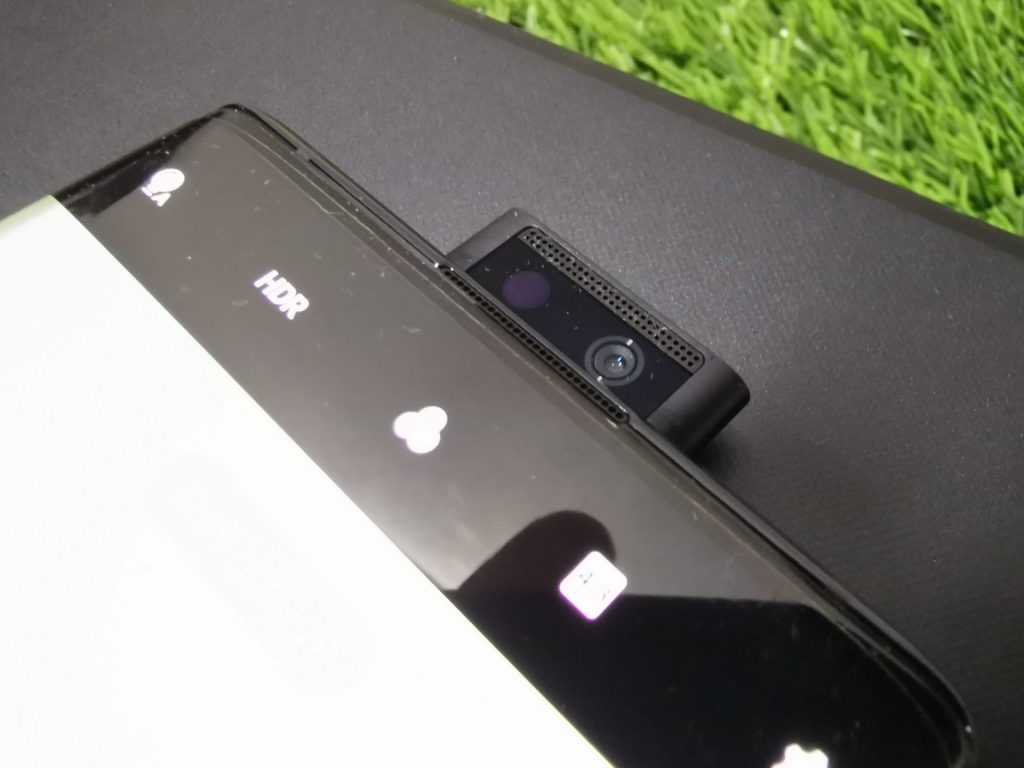 Perhaps, one of our favourite feature of the Vivo NEX 3 is its cool virtual buttons. Unlike some smartphone that purely relies on the touch screen to enable virtual buttons, Vivo has placed pressure sensors on the right side of the phone to simulate the power and volume buttons. Meanwhile, these virtual buttons will not disrupt the whole waterfall display design. Moreover, the haptic feedback provided with the press of the virtual button worked extremely well. If you didn’t care about the details of the implementation of these virtual buttons, you would probably have thought that you were touching on real physical buttons! 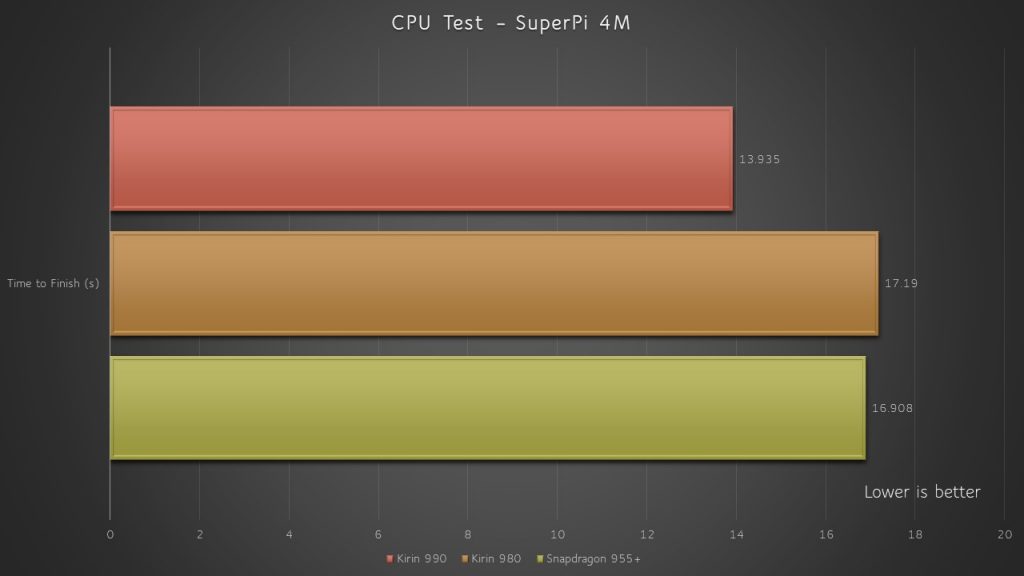 In the SuperPi test, we are taking calculation of Pi as a computation task to determine the performance of a system’s CPU. We will expect that a processor with a higher clock frequency will perform better in this test. Even though both the Snapdragon 855+ and Kirin 990 have similar max clock frequencies, the former did not perform as well as expected. In this test, we saw that the Kirin 990 had a clear lead. The performance of the Snapdragon 855+ on the Vivo NEX 3 was similar to the Kirin 980, which is a year old product. 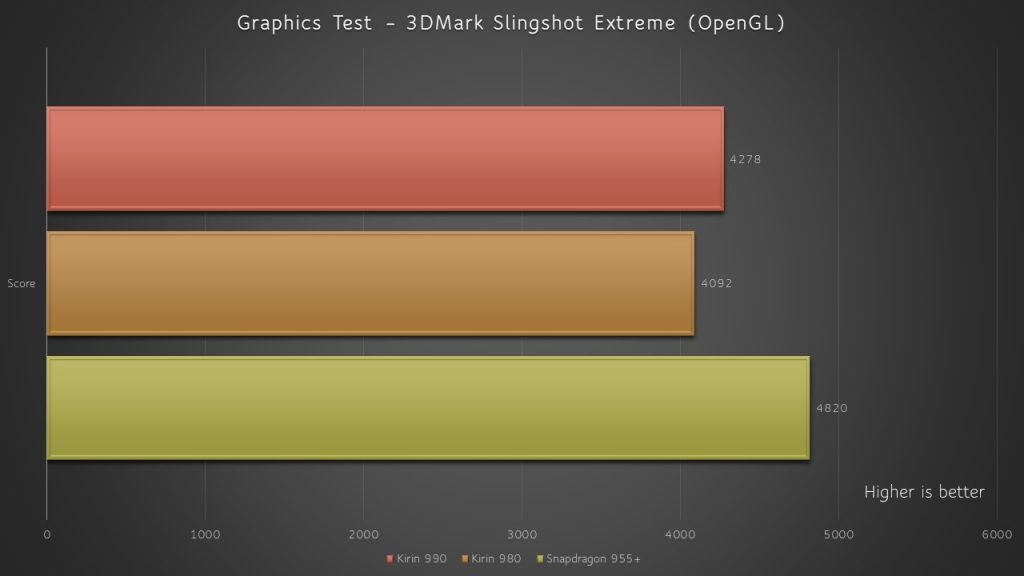 Moving on to graphics, the Snapdragon 855+ had a clear lead. In terms of the graphics performance, it seems that the Adreno GPU on the Snapdragon chips still perform better than what Huawei offers. 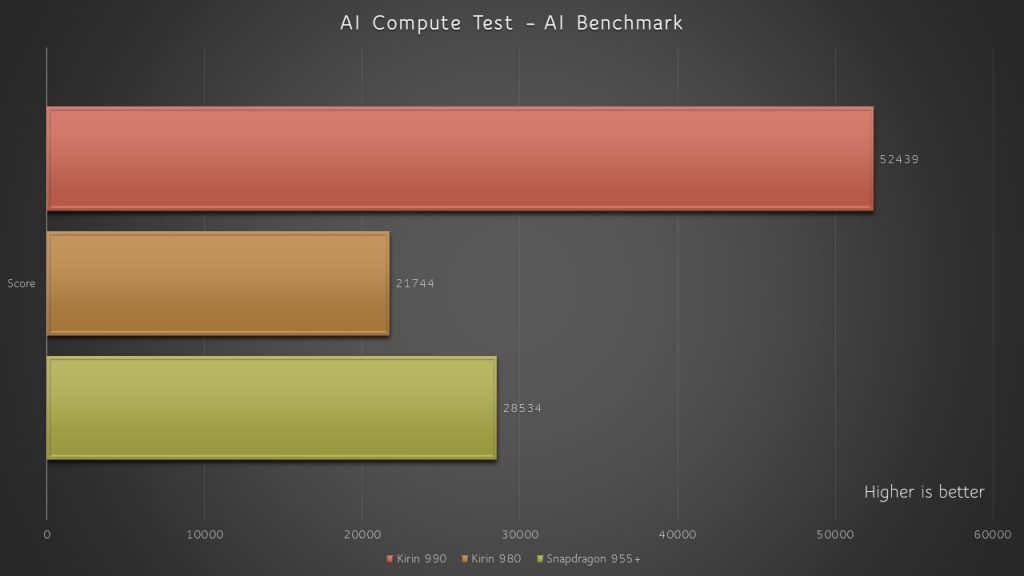 While the Kirin 990 was seen as an AI compute powerhouse, the Snapdragon 955+ was not that bad either. It still managed to perform much better than the Kirin 980 in this test. 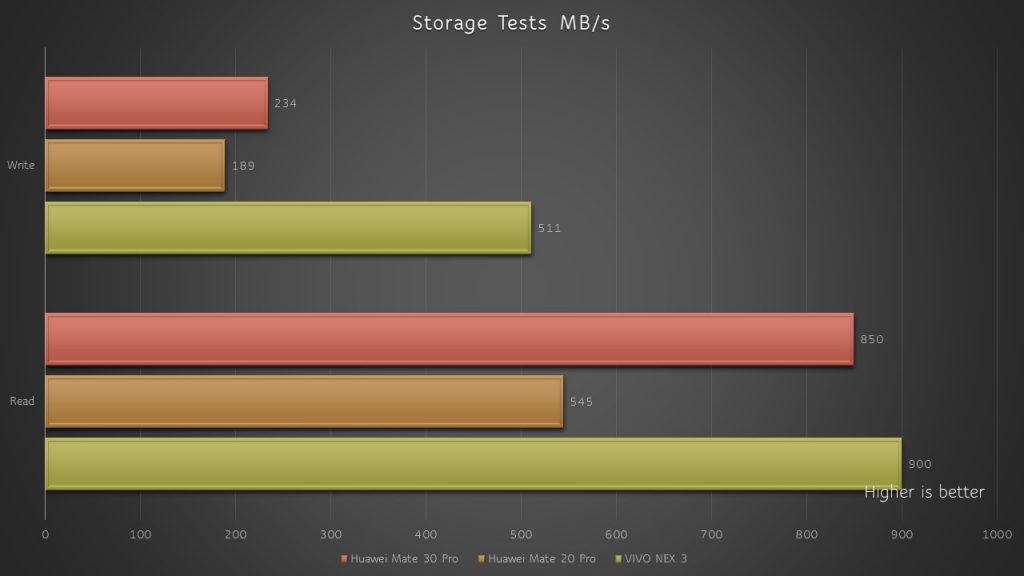 When it comes to storage, the Vivo NEX 3’s system storage speed excelled. Most likely, Vivo had went ahead with higher quality and better performing storage components for their devices. Such high storage speeds also mean that users can transfer files between their PC and the smartphone faster. If you are someone who frequently copies your data out from your smartphone for your work, you will really appreciate this. 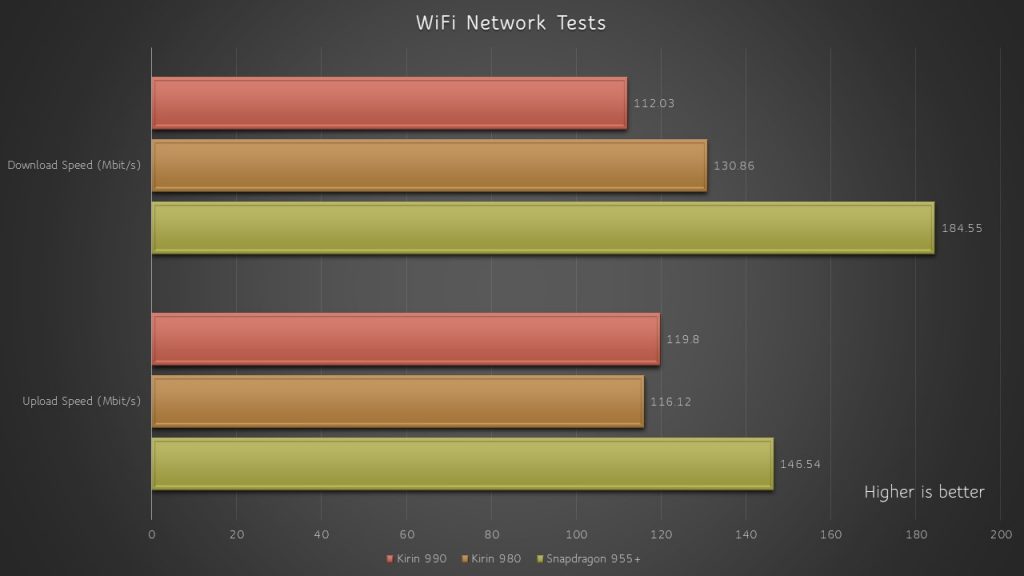 Similarly, our Wi-Fi tests were in favor of the the Vivo NEX 3. We can see that both upload and download speeds were faster on the Vivo NEX 3 than other competing products.

As a flagship device, it will only be fair if we compare the camera performance of the Vivo NEX 3 to the the Huawei Mate 30 Pro (which is known to have the best smartphone camera in the market). How well does the Vivo NEX 3 perform? We’ll see.

Both smartphones feature ultra wide-angle lens. Vivo NEX 3 can capture a slightly wider view, as it is equipped with a lens that supports 0.5x zoom. On the other hand, the Huawei Mate 30 Pro only allows 0.6x wide angle. Nonetheless, we thought that both smartphones were able to capture the subject well.

Without any alterations to each camera’s settings, and only putting them to fully automatic, we had two very different photos captured. We would say that the Huawei Mate 30 Pro was able to accurately reproduce the colours of the scene. Even though both photos were taken just seconds apart, the Vivo NEX showed a much blue-ish tone, which was not representative of the actual scene.

When it comes to zoom performance, the Vivo NEX 3 suffered in terms of image clarity. While images are expected to get blurry when zoomed in digitally, Huawei’s advanced software is able to intelligently correct and fix the blurriness of the photos. Even though the photo was captured at 30x, the Huawei Mate 30 Pro’s photo still looks so much clearer than the Vivo NEX 3, which is only at 20x.

Both smartphones were able to detect the scene and change their settings accordingly. The Vivo NEX 3’s photo seems a bit too bright to our linking, but was still able to capture the subject clearly.

The camera system of both smartphones reacted similarly to another food subject. The colours food captured on the Huawei Mate 30 Pro always look a lot more contrasting and vibrant, while the Vivo NEX 3 looks unnecessarily bright.

For a wide-angle night scene, we can see that the Huawei Mate 30 Pro was able to capture a brighter picture than the Vivo NEX 3.

Similarly, on fully automatic mode, the photos taken at night on the Huawei Mate 30 Pro looks sharper and brighter. If you take a closer look at the windows of the hotel rooms on the Marina Bay Sands towers, you can see the partitions clearer on the photo captured by the Mate 30 Por.

The Night Mode feature of the Huawei Mate 30 Pro still looks good as it’s supposed to. Every subject of the image looks so much vibrant. There’s nothing much we can about the NEX 3, as it’s night mode still looks similar to that without the mode turned on.

Don’t get me wrong. The Vivo NEX 3 still performs very well in the night shots. However, when compared to the Huawei Mate 30 Pro, we can really see the difference between good and excellent.

The Vivo NEX 3 also does not come with optical image stabilization features. Therefore, while taking videos on the device, the output appears to be very shaky and blurry. The Vivo NEX 3 comes with many practical new features that makes this smartphone a pleasure to work with. Unlike other brands which pushes out insensible features just for the sake of it, we can see that every feature that comes with the Vivo NEX 3 is highly usable, and can really be deemed as an improvement to previous technologies.

This smartphone excels at providing a exceptional media experience to its users. Its large display, coupled with its insignificant bezels, makes watching shows and movie on the smartphone so pleasurable. You don’t need to think about getting used to notches or holes on the screen at all, at they are simply not there. You can just focus on watching your favourite content just the way they are meant for you.

Our only gripe of the Vivo NEX 3 is its camera performance. Even though it’s above average, it’s just not there yet for a flagship device.

If you are looking for a new smartphone for daily use, and wouldn’t care too much about having the best camera performance, the Vivo NEX 3 is a great choice.

Huawei Mate 30 Pro Review - Love it or hate it