Review of the Google Pixel 3

Home » Review of the Google Pixel 3

When the Google Pixel 3 was launched, everyone’s attention was on the new Pixel 3 XL, leaving the smaller variant Pixel 3 neglected. Similar to the Pixel 3 XL, the Pixel 3 aims to provide the kind of “Google Experience” to its users. Will the smaller screen size hinder user experience on a smartphone? How does the Pixel 3 perform? Does it take good photos like the Pixel 3 XL? These are the questions which we want to answer in this review.

Design of the Google Pixel 3 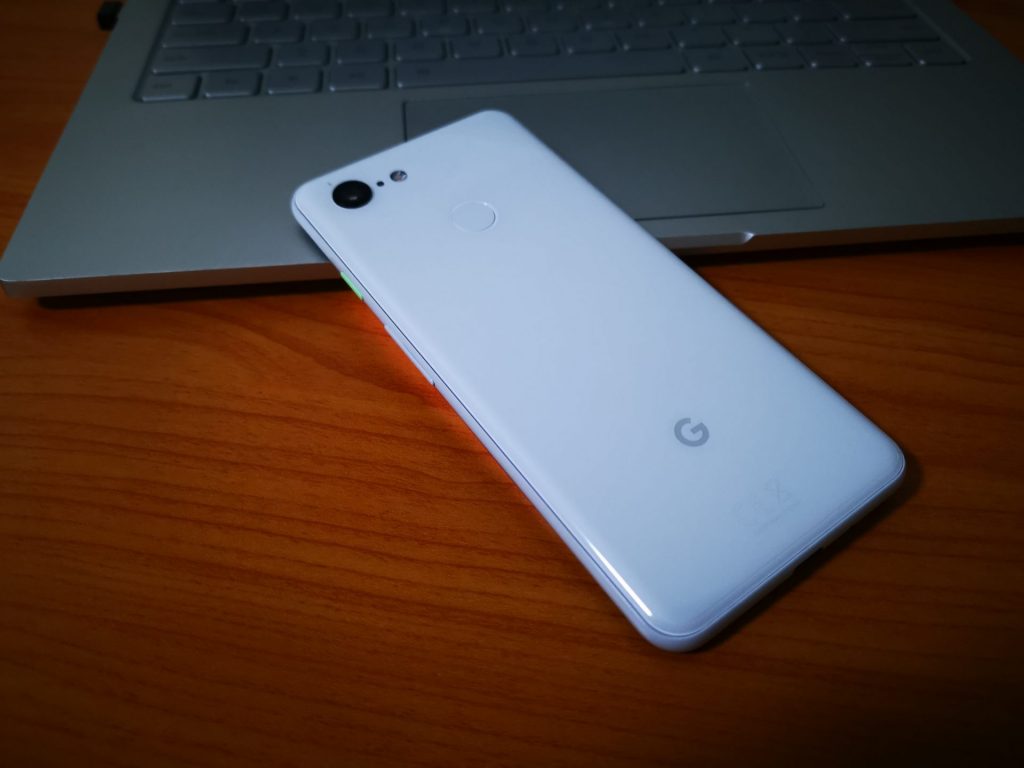 Google hardware devices are designed distinctly from any other products in the market. Usually, Google designed hardware, such as the Google Home assistants, Chromecast, Pixel laptops and Pixel smartphones will always have a very clean and simple design. Google doesn’t add in unnecessary design elements that complicates the overall aesthetics of a device. They have created demand and a trend for minimalist styles, which is considered extremely popular these days. 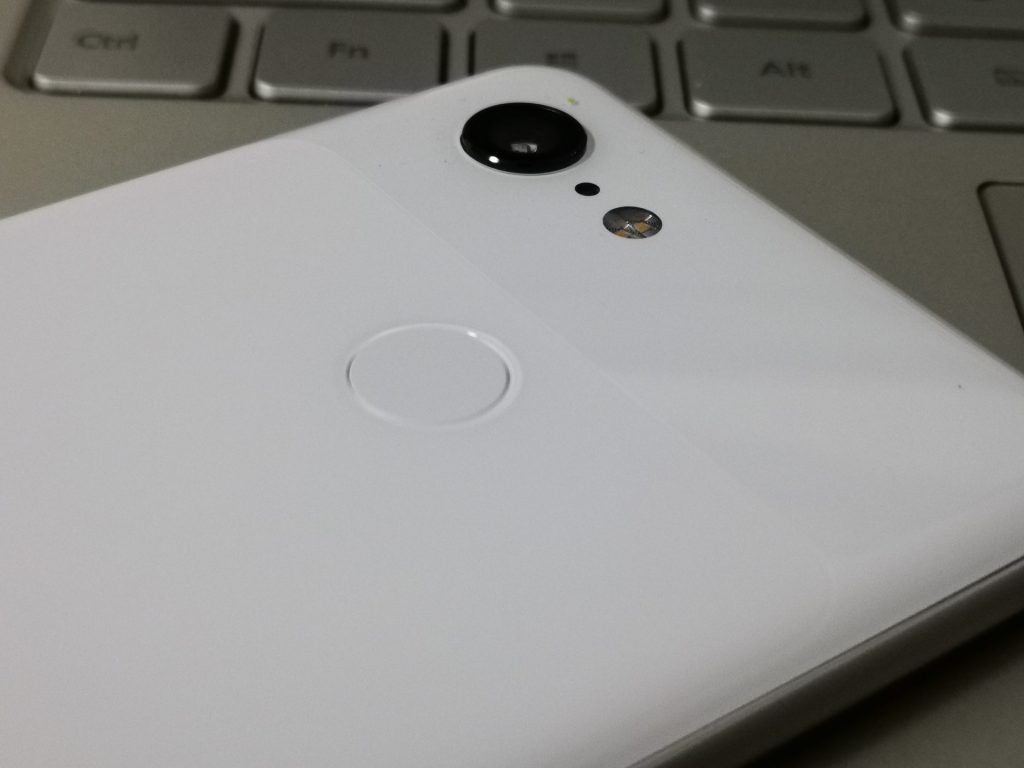 The Google Pixel 3 is a prime example of Google’s design styles. At the back of the phone, they used two different kinds of material to accentuate the focus on usability. A layer of smooth but matt finish is applied in order to prevent nasty fingerprint stains on the phone. This design is especially ingenious, as users will be required to feel for the fingerprint reader with their index fingers.  The remaining glossy finish at the camera area continues to put focus on the camera hardware. 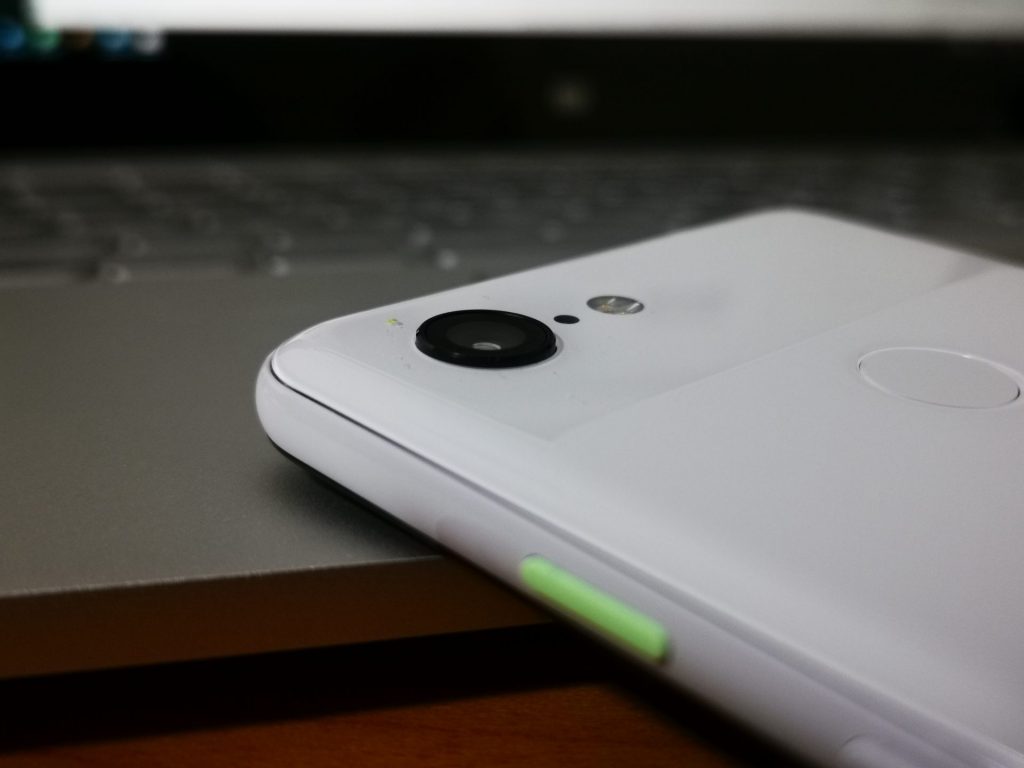 Without a case for the phone, the camera lens bump on the Pixel 3 is quite noticeable. The protrusion of the camera lens of the smartphone may increase the chance of having it scratched, thus affecting the photos taken from the phone. However, Google has taken this into consideration, and used a tough durable material on the lens. Furthermore, official Google bumper cases will also effectively take away the problem of having a protruded camera lens.

At the front of the device, we saw Google adopt a rounded edge display design. Because of the size limitation of the device, the popular large display size to body ratio design was not possible. This has caused the phone to have large top and bottom bezels. While many may be forgiving to Google, given their efforts to introduce a “smaller” 5.5-inch display to the market, such a design may turn potential customers away. 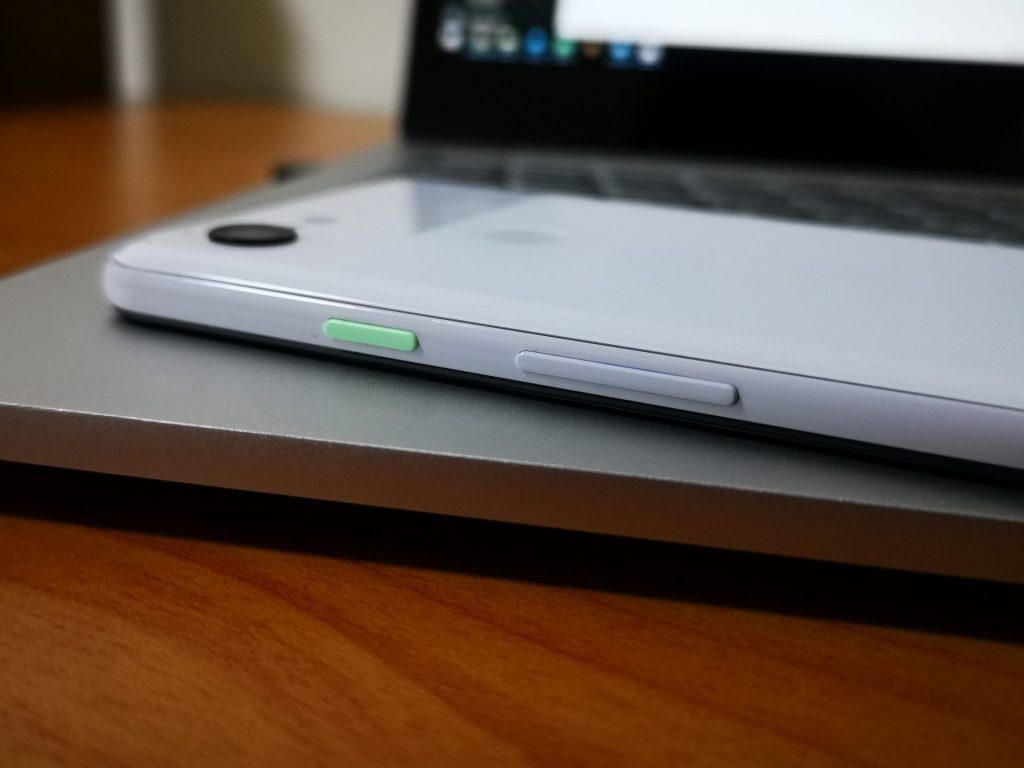 On the right, we can see the power and volume buttons. The phone has its power button on the top, which differs from other general smartphones of other brands. If you are migrating from other brands, you could take some time before actually get used to this placement of buttons. 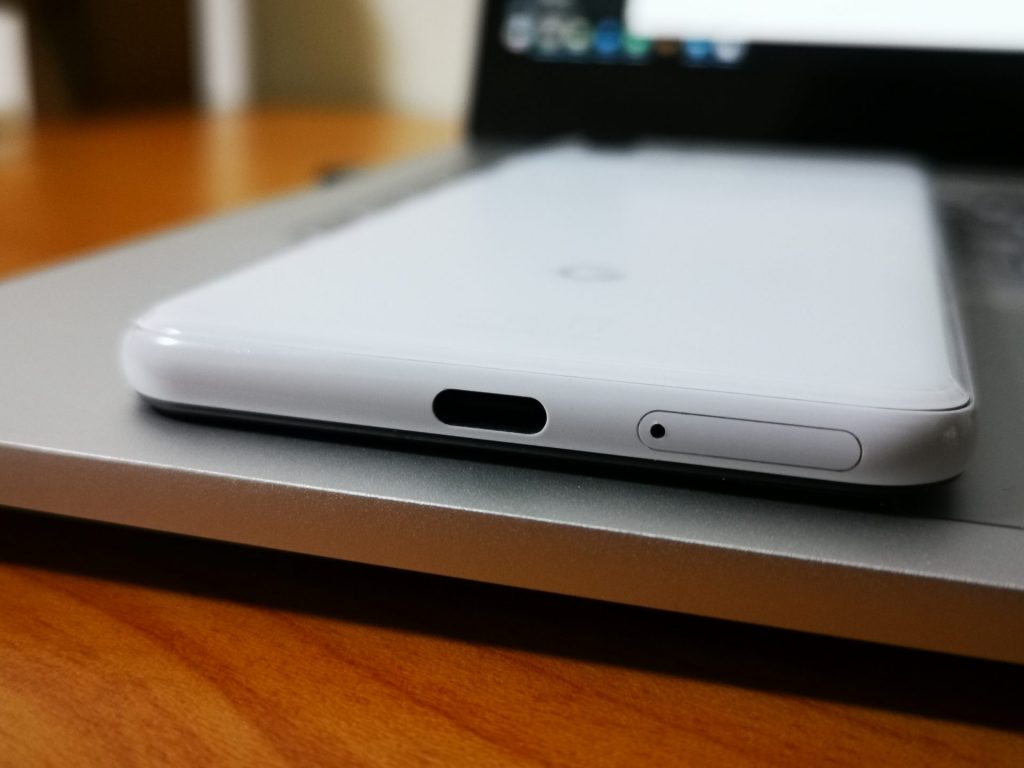 We also realised that in order to keep the phone’s minimal design, 3.5mm headphone jacks are not present on the Pixel 3. Luckily, Google has included a set of USB Type-C earbuds included in the retail package. The package also includes a 3.5mm audio adapter for your standard headphones.

New users of the Google Pixel may find it difficult to get used to interacting with stock Android 9.0. Most notably, the overview and “all apps” buttons are now missing. The activation of their functions is now achieved by gestures instead. Users will have to swipe from the bottom of the screen upwards to reveal all background apps. To access all their apps in the apps drawer, they will have to swipe up again at the “Overview” page. This may seem counter-intuitive, the same gesture seems to activate two different kinds of functions, and could cause confusion to new or less-savvy users.

Nonetheless, gesture-based navigation has got its benefits. After spending about two days with the Pixel 3 to learn and get used to this new way of navigation, activating the apps overview and apps drawer became almost natural. This is likely due to not needing to identify buttons on the phone before execution of the functions. 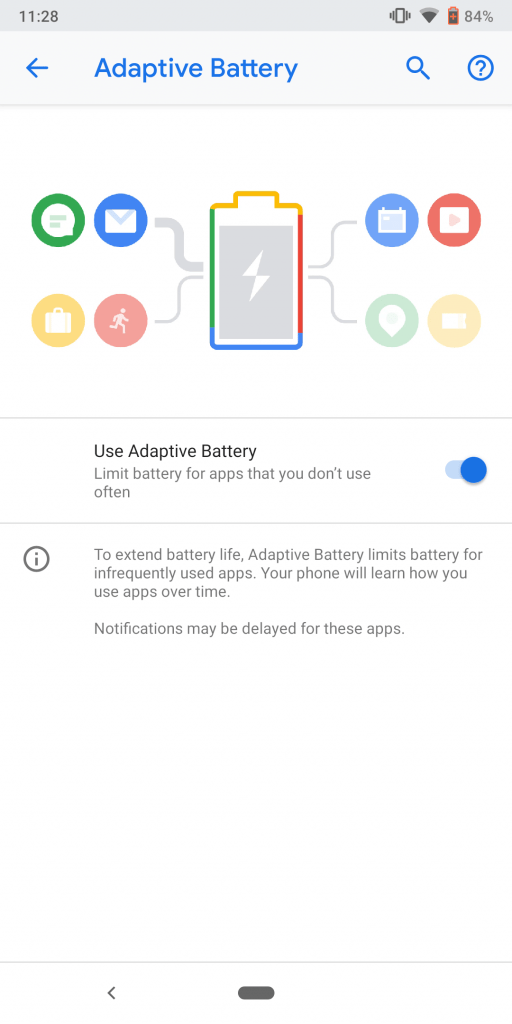 As Pixel 3 is made directly by Google for Android 9.0, many of the new unique features on Android 9.0 are showcased on this phone. It makes a smartphone just so much “smarter”, as it creates a very personalized experience to its users. For example, the new Adaptive Battery feature learns about the apps and services which you use the most and least often and changes the settings on phone to reduce the battery consumption. This is the same for automatic brightness, which learns about the brightness level you prefer in different apps and environments. Feedback is provided to smartphone when you edit the brightness settings via the Quick settings panel (when you pull down from the notification bar).

While there are a lot more features in Android 9.0, the above are those which had the most direct impact on user experience for me.

But what you would really love on a Google Pixel phone is how integrated all the different Google apps are. For example, once the photos are captured on the camera, they will be saved on Google Photos. You can edit or retrieve and backup your photos online without much effort. The Google Pixel brings out the single integrated experience that Google wants you to have not on just hardware, but software as well.

The Pixel 3 is equipped with the flagship Snapdragon 845 from Qualcomm. Therefore, users can expect true flagship performance on the Pixel 3 for all different use cases, be it games, media consumption, social media browsing or photo capturing. The Snapdragon 845 also comes with the new X20 LTE modem which can support LTE CAT 18 speeds of over 1 Gigabit per second. For the layman, it means that this phone is capable of downloading a two-hour long HD movie in just two minutes, if your current network operator supports this speed.

Let’s run some benchmark tests to see how well does the Pixel 3 fair.

Be it playing games, watching videos or simply just listening to your favourite songs, the Google Pixel 3 excels in providing the best possible user experience. We must say… the Google Pixel 3 is the real deal in this area. Firstly, it is equipped with an OLED display panel, which provides a great contrast ratio to the images on the phone. This means that the blacks on the screen are “really black”, and the whites are “really white”.

While the display is one of the factors for a great entertainment experience, the speakers are equally important. This is also where the Pixel 3 stands out. I am bold enough to say that the Pixel 3 has got the best ever smartphone speakers in the market right now. No other smartphone can come close to producing such immersive and high-quality stereo sounds from their device. In fact, the Pixel 3 even puts some notebook computers to shame… The sounds coming from the speakers were well balanced across the highs, mid and low. There is even a very slight “oomph” that can be felt from the device when thumpy beats were played. You simply had to experience it yourself to understand the true performance of this set of speakers.

Many smartphone manufacturers are placing multiple cameras at the rear of the smartphone to give an impression that “more is better”. In fact, if you look at all the flagships phones in the market right now, almost all of them have at least two rear cameras. The fear of losing out hinders smartphone innovation. On the other hand, Google stuck to their own values, instead of simply blindly following market trends. They believe that just a single high performing camera at the rear can overdo the capabilities of many other camera setups. Thankfully, they were right.

The Google Pixel 3 camera captures beautiful photos. Regardless if the images were created solely by hardware or a combination of hardware/software, they looked clear, high in details and more importantly, natural in different scenarios. Here are some sample photos taken on the Google Pixel 3. For comparison sake, some photos are taken from Huawei’s Mate 10 Pro.

Low light shots on the Pixel 3 really stands out. The camera was able to produce light information in detail and produce truly impressive photos in dark environments.

Interestingly, with a new update from Google, the Pixel 3 also comes with the “Night Sight” feature for its camera app. If you are familiar with Huawei’s Night Mode, this feature workssimilarly. It achieves detailed night shots by capturing a succession of shots to simulate a long exposure time, and stitches the best of different portions of shots into one. No doubt, this feature is truly amazing. To find out more, visit our recent Test on Night Sight.

Here are some other photos taken from the Google Pixel 3. 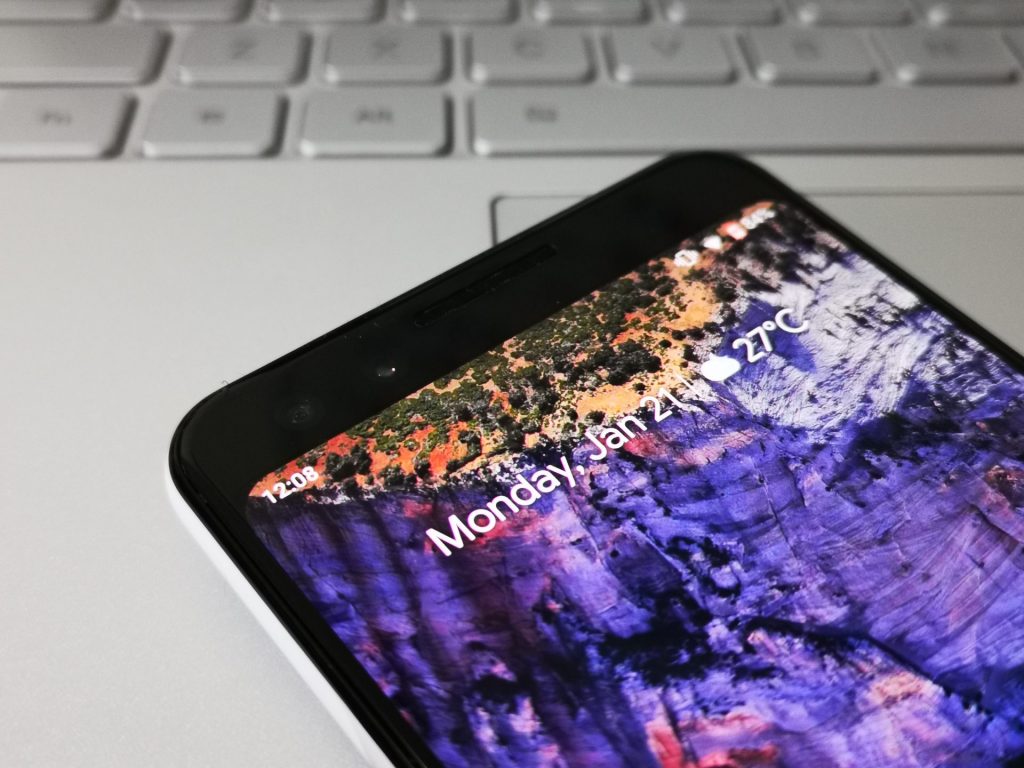 The Google Pixel 3 is worthy of a being called a flagship smartphone, as it will perform well in any manner that it is used for. Its premium OLED display, loud and balanced stereo speakers, impressive single camera system sets it apart from any other smartphones in the market. Moreover, the use of the top-of-the-line mobile chipset from Qualcomm also places the Pixel 3 as a serious contender in the high-end smartphone market.

While there are lots of good things about the Pixel 3 to talk about, the bezels above and below the display could turn many potential customers off. In today’s competitive smartphone market where flagships are striving to maximize the display to body ratio, the Pixel 3 totally ignores this aspect.

Nonetheless, if you enjoy a smartphone that gives you a that Google “Smartness”, great performing camera system and unbeatable audio and visual experience, and also if you do not care about bezels, the Pixel 3 is the way to go.

Review of the WhiteCoat App - Can it replace visits to the doctor?