Scientists from Nanyang Technological University, Singapore (NTU Singapore) have developed a technology where two robots can work in unison to 3D-print a concrete structure.

This method of concurrent 3D-printing, known as swarm printing, paves the way for a team of mobile robots to print even bigger structures in future.

Developed by Assistant Professor Pham Quang Cuong and his team at NTU’s Singapore Centre for 3D Printing, this new multi-robot technology was published in Automation in Construction, a top tier journal for civil engineering.  The NTU scientist was also behind the Ikea Bot earlier this year where two robots assembled an Ikea chair in 8 min 55s minutes in concert.

Using a specially formulated cement mix suitable for 3-D printing, this new development will allow for unique concrete designs currently not possible with conventional casting. Structures can also be produced on demand and in a much shorter period.

Currently, 3D-printing of large concrete structures requires huge printers that are larger than the printed objects, which is unfeasible since most construction sites have space constraints.

Having multiple mobile robots that can 3D print in sync means large structures like  architectural features and specially-designed facades can be printed anywhere as long as there is enough space for the robots to move around the work site.

The NTU robots 3D-printed a concrete structure measuring 1.86m x 0.46m x 0.13m in eight minutes. It took two days to harden and one week for it to achieve its full strength before it was ready for installation.

“We envisioned a team of robots which can be transported to a work site, print large pieces of concrete structures and then move on to the next project once the parts have been printed,” explained Asst Prof Pham from NTU’s School of Mechanical and Aerospace Engineering.

“This research builds on the knowledge we have acquired from developing a robot that can autonomously assemble an Ikea chair. But this latest project is more complex in terms of planning, execution, and on a much larger scale.”

Printing concrete structures concurrently with two mobile robots was a huge challenge, as both robots have to move into place and start printing their parts without colliding into each other.

Printing the concrete structure in segments is also not acceptable, as joints between the two parts will not bond properly if the concrete does not overlap during the printing process.

This multi-step process starts by having the computer map out the design to be printed and assign a specific part of the printing to a robot. It then uses a special algorithm to ensure that each of robot arm will not collide with another during the concurrent printing.

Using precise location positioning, the robots then move into place and print the parts in good alignment, ensuring that the joints between the separate parts are overlapped. Finally, the mixing and pumping of the specialised liquid concrete mix have to be blended evenly and synchronised to ensure consistency.

“This multiple robot printing project is highly interdisciplinary, requiring roboticists to work with materials scientists to make printable concrete. To achieve the end result of a strong concrete structure, we had to combine their expertise with mechanical engineers and civil engineering experts.”

“Such an innovation demonstrates to the industry what is feasible now, and prove what is possible in the future if we are creative in developing new technologies to augment conventional building and construction methods.”

This research project was supported by the National Research Foundation, Singapore (NRF Singapore) and Sembcorp Design and Construction, one of the key industry research partners of SC3DP.

Moving forward, the NTU research team will look at integrating even more robots to print larger scale structures, optimising printing algorithm for consistent performance and to improve the concrete material for faster curing. 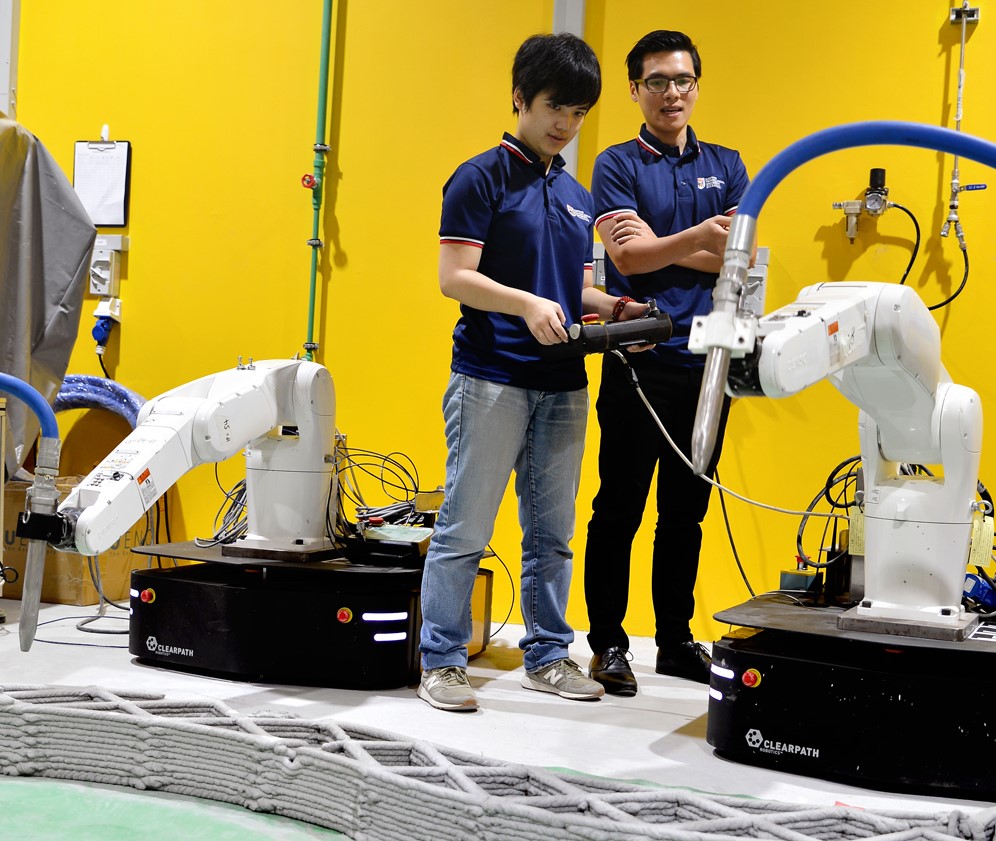 Ranked 12th in the world, NTU has also been placed the world’s top young university for the past five years. The University’s main campus is frequently listed among the Top 15 most beautiful university campuses in the world and it has 57 Green Mark-certified (equivalent to LEED-certified) building projects comprising more than 230 buildings, of which 95% are certified Green Mark Platinum. Apart from its main campus, NTU also has a campus in Singapore’s healthcare district.