LINE Launches Interactive In-app Game Feature “Face Play”
·      Two games versions are made available: “BT21 Says” where users can imitate expressions of characters by popular Korean boyband BTS, and battle monsters on “Monster Pop”
·      Users battle it out using facial expressions and movements
SINGAPORE – April 25, 2018– Today, LINE Corporation announced the launch of “Face Play,” a fun and interactive game feature on LINE’s in-chat video calls using Augmented Reality (AR).
Video calls on LINE are popularly referred to as “constant LINE-ing”[i] and video calls are increasingly being used for a variety of purposes, resulting in a recent surge in usage. In order to make communicating over video calls even more exciting for users, LINE has launched Face Play, an interactive AR in-app feature that allows multiple users to battle against each other using facial expressions and movements. Two game versions are made available together with the launch, “BT21 Says” and “Monster Pop”, with LINE planning to launch more versions in the future.
“BT21 Says” is one of the game versions launched with Face Play where users get to collect BT21 characters by imitating their facial expressions as they appear on screen. The characters are part of a collaboration between popular Korean boyband, BTS, and LINE FRIENDS.

(Screenshots taken from a development version of BT21 Says)
Members of BTS were personally involved in every step in the character creation process; from developing the characters’ stories to the merchandise. BT21 character LINE stickers have incurred over 20 million downloads since going on sale. The LINE FRIENDS flagship store in Harajuku was the first store in Japan to sell BT21 merchandise and almost 6,000 fans lined up before the store opened in hopes of getting their hands on it. The merchandise is immensely popular among fans and LINE FRIENDS stores globally have reported a significant increase in sales.

The second game version called “Monster Pop” will also be launched together with Face Play. This game features heart-pounding thrills where users’ are required to fight off a monster invasion by using their eyes to shoot laser beams. 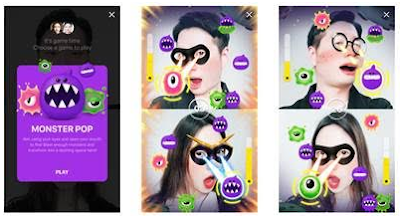 (Screenshots taken from a development version of Monster Pop)
In order to start using the Face Play feature, users would have to be in a video chat and select the Face Play option from the “+” menu. Users can take screenshots while playing the game and share images taken during gameplay[ii]. For Android devices, users can even share the gameplay recordings. Face Play is supported on both iOS (iPad excluded) and Android OS devices with LINE version 8.5.0 or higher.
LINE aims to continue incorporating additional features in its app in order to provide users with a richer and more enjoyable communication experience.
About LINE Corporation:
Based in Japan, LINE Corporation (NYSE:LN/TSE:3938) is dedicated to the mission of “Closing the Distance,” bringing together people, information, and society. The LINE messaging app was launched in June 2011 and has since grown into a diversified global platform, operating a range of services and contents.
[i] “Constant LINE-ing” refers to constant usage of LINE voice call or video call with a significant other or friend, giving users the experience as if they were constantly together.
[ii] Requires iPhone 6 or Android OS 4.4 or higher