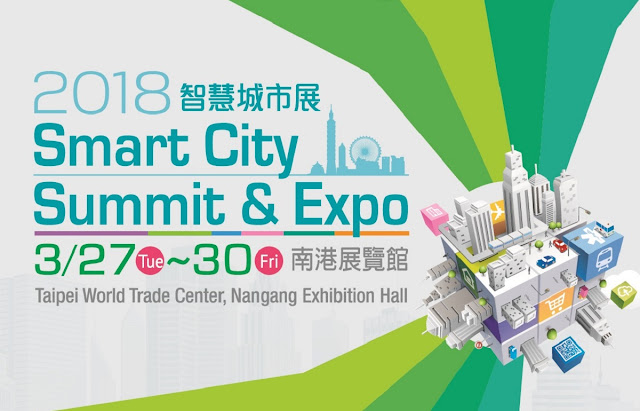 Smart City Summit & Expo,
Asia’s largest annual smart city tradeshow,
will be held at Taipei Nangang Exhibition Center in Taipei, Taiwan, March 27 to
30. Jointly organized by Taipei City
Government, Taiwan Smart City Solutions Alliance, Taipei Computer Association,
with government support from Bureau of Foreign Trade, Ministry of Economic
Affairs, the four-day event will feature networking opportunities and
educational seminars. More than 120 city governors and municipal officials
are expected to attend the event. Around 300 delegates and representatives will
be brought along to take part in the 2018 edition of Smart City Summit &
Expo.
SCSE is a comprehensive
business-to-business tradeshow for smart cities industries. This year, the
fifth edition of SCSE is expected to host 1,200 buyers from over 50 countries.
Compared to last edition, the number of municipal officials and representatives
grew by an impressive rate of 120%, while business buyers grew by 18%. The
2018 SCSE features 210 exhibitors, 1,050 booths, as well as 63 forums and panel
discussions, representing a 6.67% increase compared to last year. The event is
expected to attract some 16,000 conference participants and 30,000 exhibition
visitors, including an impressive number of international retailers.
The 2018 edition is characterized
this year by the theme of “Building Smart Cities on the IoT”. As
cities around the world are aware of the huge potential of the Internet of
Things (IoT), building more liveable, sustainable, and more efficient cities by
transforming infrastructures with Internet of Things (IoT) solution is
becoming a reality.
Smart City Summit & Expo
intends to elaborate on the same topic as last year to further develop ideas on
building smart cities based on the Internet of Things.
Smart City Summit & Expo
2018 will include 4 features:
1. The exhibition will
showcase best innovative practices accelerated through cross-industry and
cross-domain collaborations.
2. Discover an increased
international exchange of new approaches, ideas and insights
This year 12 major cities
are going to set up their city pavilions, including Kyoto, Japan; Catalonia,
Spain; and cities from the UK, France, Australia, Hungary, Denmark,
Israel, Poland, Russia, Mexico, Mongolia. For Taiwan’s key pavilions, county and city
governments including Taipei, New Taipei, Taoyuan, Taichung, Tainan, Kaohsiung,
Hualien and Yilan are
setting up their independent pavilions.
Taiwan’s Asian Silicon Valley project
also invited 7 counties and cities to set up joint theme pavilions, creating a
total of 15 highly anticipated theme pavilions for the event. Counties and
cities will demonstrate some of the best smart city projects initiated by
Taiwanese local governments. Among them, the Taipei City Government will
exhibit with a scale of 42 booths as the biggest city vision theme pavilion.
3. A new space for business
matching program will be set up
Registered attendees and
overseas buyers, distributors, suppliers, manufacturers attending Smart City Summit & Expo
2018 will be able to enjoy the
benefits of a new business matching space. The matching area being set up
provides a business platform for buyers and sellers to make relevant
connections and facilitate meetings, ultimately allowing them to maximize their
networking opportunities at the event. Business visitors will have a chance to
meet potential business partners from more than 50 countries across the world –
from the UK, France, Italy, Spain, Australia, Russia, and many more, in
addition to many more signing up for the matching services. The organizers
designed the business matching program, made special arrangements, and set up
an area for networking, meaning a step toward in creating opportunities for new
development and infrastructure in building smart cities.
4. Global Organization of
SMARTCITY -GO SMART Pre-launching Ceremony
To promote the exchange of
experience in the construction of smart cities in various cities around the
world, and experiment with the idea of creating cities as living labs, Taipei
City is inviting cities such as New Taipei City, Taoyuan, Taichung, Tainan, and
Kaohsiung, as well as cities of Japan, South Korea, Russia, Australia, UK,
France, Greece, the Czech Republic, El Salvador to jointly organize and attend
a “Global Organization of SMARTCITY.” -GO SMART initiative Pre-launching
Ceremony. The signing event attended by honorable guests will kickstart the
initiative. The alliance will be entering into a preparation stage and hope to go
into operation by next year before the 2019 edition of SCSE takes place.

How to Recover Deleted Files With Free Undelete Software on Windows