Virtualization with Threadripper – Powered by the ASRock X399 TAICHI Motherboard 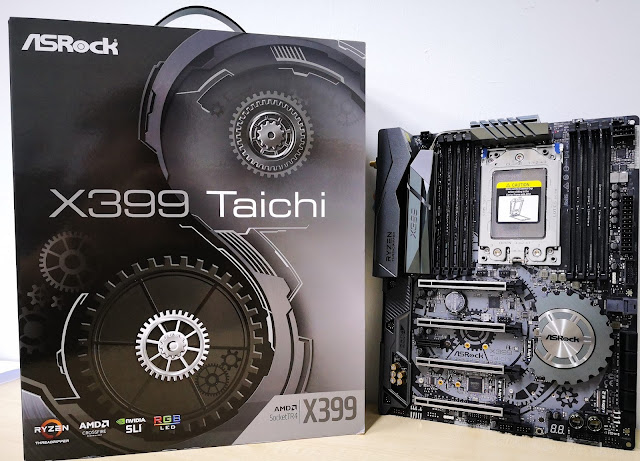 While conceptualizing our build for a “1 Tower, 3 PC“, using the AMD Threadripper platform, we were contemplating between the available X399 motherboards. Generally speaking, when comparing the different brands and models, it seems that there aren’t that many significant variations. Specifications are rather similar, and since the X399 is already a feature packed chipset, there is no need for manufacturers to add additional bridges or chips to enable certain interfaces or ports.
The X399 Threadripper platform is catered for the High-End Desktop (HEDT) segment, and we believe that the type of users interested in this platform are very different from mainstream PC users. If you have the budget for a CPU that costs over $1000SGD, it could mean two things; you are either loaded, or you have a specific use for such a system.The Threadripper CPU is perfect for users who requires a good amount of CPU computational capabilities, especially in multi-threaded processing. This could be used for virtualization, video rendering, or even CAD. Therefore, there is no real need for gaming features or fancy designs that probably would not be utilized or appreciated. 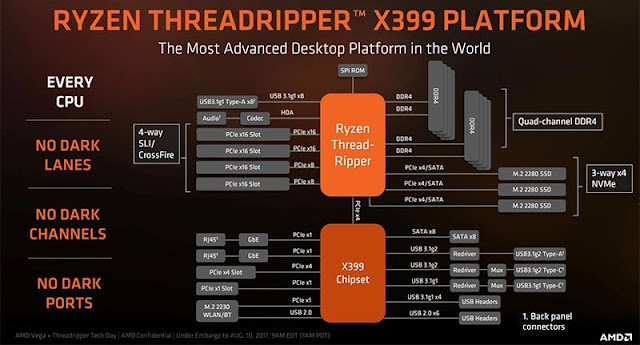 Thanks to the crazily feature-packed X399 chipset, any motherboard that is based on it should already be fairly decent out of the box. The price factor and requirements for a “1 Tower, 3 PC” build would also have a significant weight in our choice for the right motherboard. 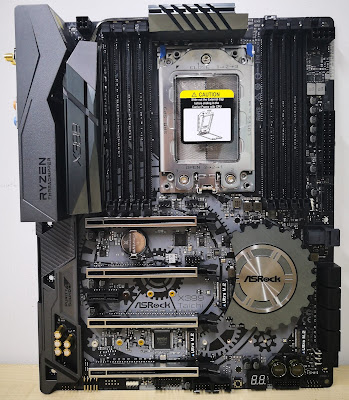 In the end, the ASRock X399 TAICHI was our choice of motherboard, as it suits specifically for our use case. To achieve “1 Tower, 3 PC”, we were required to run virtualization with the motherboard. Additionally, with the abundance of I/O features on the X399, we were already ready to get started. The ASRock X399 TAICHI is one of the more affordable X399 motherboard in the market. It also boasts features that sets it apart, making it our number one choice. Here are some of the highlights on this motherboard. 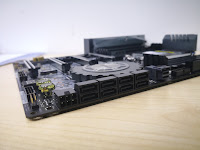 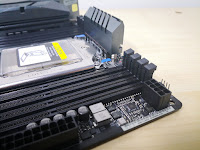 Understanding that the standard power requirements may not be sufficient for motherboard, ASRock has included additional power plugs for power hungry components. Instead of just a standard 8-pin EPS connector for the motherboard/CPU, they have included an additional 4-pin as well. Moreover, there is a 6-pin 12V power connector for PCIe graphics card. (In the event when power requirements go over the maximum standards that is allowed through the slot, the additional power from the 6-pin can come in useful). 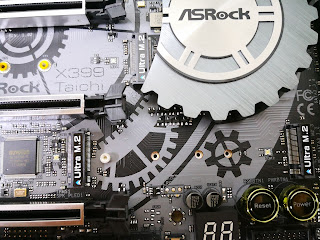 These days, NVMe SSDs are becoming a norm for new systems. While most mainstream chipsets still lack RAID features for their NVMe SSDs, the X399 chipset is one of the first to introduce this feature for the tech enthusiasts. System builders can simply stick their NVMe SSDs into these M.2 slots, and enable RAID 0 for unparalleled storage performance on their PC.
3. Multi-GPU Ready 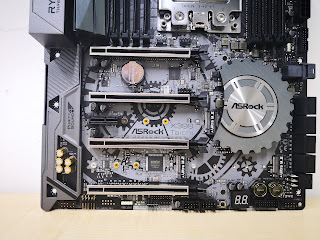 The Threadripper platform also has 4 x PCIe x16 slots. These slots are spaced out properly, allowing up to 4 x 2-slots graphics card to be placed in one system. Such a configuration was fundamental for our “1 Tower, 3 PC” build, as we required 4 graphics cards in that one single system. Essentially, without such a setup, that virtualization PC would not have been possible.
4. Support for RGB lighting 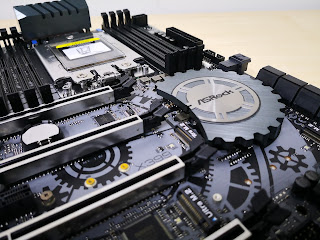 Thankfully, the ASRock X399 TAICHI did not fall into the trap of excessive RGB lighting which can considered extremely distasteful to some. The lighting is largely minimal and appears only at the chipset heatsink. The motherboard is also equipped with 2 x RGB headers, allowing the motherboard to control RGB enabled components/ LED strips directly.
5. Dual Gigabit LAN + Built-In Wireless Card 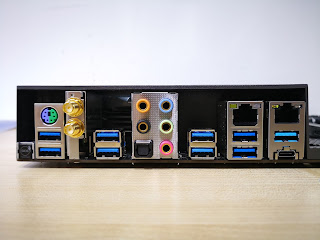 The ASRock X399 TAICHI differs itself from other X399 motherboard as it is one of the few which provides Dual Gigabit LAN. (The other 2 motherboards are the ASRock X399 Gaming Professional and Gigabyte X399 Designaire-EX) Moreover, it also comes with a built in Intel 802.11ac WiFi Module which supports wireless speeds of up to 433Mbps and Bluetooth as well. It’s simply great at network connectivity options, notwithstanding the fact that it’s one of the most affordable motherboard available.
6. Onboard Power/Reset Button and POST LED for easy debugging 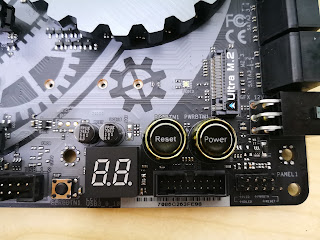 With the likelihood that many components will be attached on the ASRock X399 TAICHI motherboard, finding a faulty component can be quite problematic. Thankfully, ASRock included the POST Code LED on the TAICHI, allowing for targeted debugging and troubleshooting. Similarly, the Power and Reset buttons will also allow for easy troubleshooting of the motherboard outside of a desktop case as well.
7. Others
Purity Sound 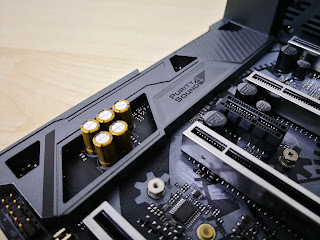 It is pretty much common for motherboard manufacturers to include high quality audio components in their high-end motherboard models these days. It is to no surprise that the ASRock X399 TAICHI gets the same treatment. The onboard audio is powered by the Realtek ALC 1220 Audio Codec, and is specifically engineered for optimal audio output. More specifically, the circuitry is equipped with high quality Nichicon Fine Gold Series audio capacitors. There is even a TI NE5532 headset amplifier built in to the circuitry for front panel audio (up to 600Ohm headsets). 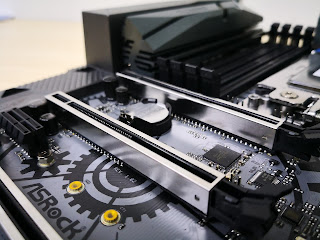 Strengthened PCIe Slots
The ASRock X399 TAICHI is made with reliability in mind. With improvements and innovation in the motherboard design, manufacturers started to add reinforced PCIe slots recently. The ASRock X399 TAICHI likewise comes with their own reinforced PCIe slots. Such will design allows for heavy graphics card to have better support, preventing any physical damage that affects the operations of the motherboard.

Suggestions and Areas to Improve 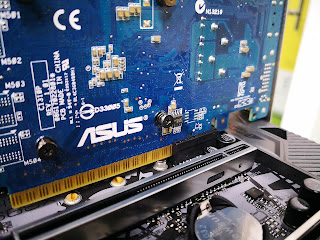 We are quite sure that X399 motherboards are not easy to design, as motherboard designers have to properly plan to include all the different features from the chipset onto a limited standard ATX/m-ATX form factor. Therefore, physical space could definitely be a constraint. Such a limitation has led to some minor trade-offs that we saw on the motherboard.
Firstly, as shown on the image above, the PCIe x1 slot is placed directly next to the M.2 slot. If a long 2280mm M.2 SSD is placed there, it could affect the placement of a standard PCIe x2 and larger expansion card onto the motherboard. The card may not even sit firmly into the PCIe slot. This could be not too much of an issue, as the slot is meant for x1 in the first place. (However, we did like the idea of removing the side of the PCIe x1 slot, allowing it to support longer PCIe devices. Traditionally, PC builders had to literally saw open the side to fit a longer PCIe card into the slot). 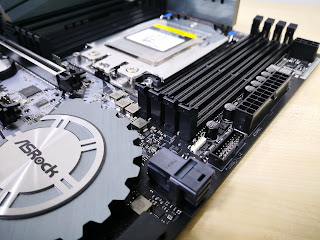 Secondly, we thought that it would make more sense to have the USB 3 front header to be placed horizontally rather than vertically upwards. This would make cable management cleaner for most desktop cases. However, if there are some technical limitations in the design, we apologize for our ignorance and lack of knowledge in this area. 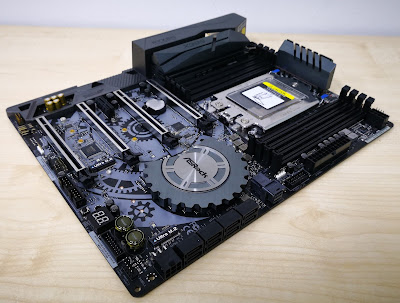 The ASRock X399 TAICHI should be the most sensible choice for anyone considering to build a Threadripper system. This motherboard has what it takes to be a good foundation for a powerful workstation/server while supporting multiple graphics card, storage drives and fast SSDs. Aesthetically, it stands out with its minimal grey and black toned design, which allows the system to flaunt its RGB lightings.
The ASRock X399 TAICHI was able to successfully support our “1 Tower, 3 PC” setup. This has really showed what the motherboard is capable of, handling multiple powerful components concurrently. We don’t really have any major complaints on this X399 motherboard. Moreover, because of the value that it brings to the table, we will definitely recommend the ASRock X399 TAICHI.
For the LATEST tech updates,
FOLLOW us on our Twitter
LIKE us on our FaceBook
SUBSCRIBE to us on our YouTube Channel!