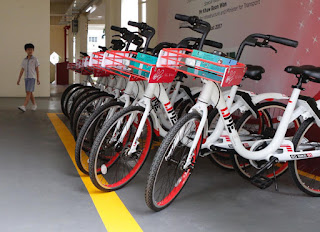 SINGAPORE, 26 February 2018 – The geostation technology was first introduced by SG Bike in August 2017 to deter indiscriminate parking. Indiscriminate parking of shared bicycles by users has been an issue in recent months, with the authorities putting in more measures to ensure the population of bicycles are parked within designated parking places.
This collaboration to use NB-IoT network will further enhance SG Bike’s geostation technology to monitor with real-time communication to track and retrieve bicycles that are not parked within the designated bicycle parking zones. The indiscriminate parking of shared bikes along corridors, at bus-stops or even in lifts will soon be a thing of the past with SG Bike’s geostation technology.
Unlike current geo-fencing technologies used by most bike-sharing companies which utilises GPS coordinates, SG Bike’s geostation technology enables greater accuracy and control over indiscriminate parking of it shared bicycles through Radio-frequency identification (RFID). This is a significant milestone in encouraging responsible bike-sharing behaviour. Users can benefit from the provision of accurate data of bicycle location and availability, while operationally, SG Bike can better handle and respond to indiscriminately parked bicycles. Currently, SG Bike users who fail to return bicycles within the geostations are given a 15 minutes grace period to relocate the bicycle. With the geostation technology, users can also easily find bicycles at the designated parking places since the bicycles should only be picked up or returned at areas with a geostation. Potentially, the RFID technology deployed can be implemented onto other sharing devices, including umbrellas and scooters, to cultivate greater sharing society driven by real-time accurate data.
“We are thrilled to work with SG Bike to enable Singapore to truly benefit from the bike-sharing scheme, in an effort to accelerate our journey into a ‘car-lite’ society,” said Mr Alex Tan, Chief Innovation Officer, M1. “As a leading IoT service provider, we look forward to support SG Bike with the implementation of an efficient IoT solution nationwide to enhance the aesthetics of the city, as well as the safety and wellbeing of our communities.”
Chief Executive Officer of SG Bike, Mr Albert Teng said, “We are pleased to be in this partnership with M1, the first NB-IoT network operator in Singapore to explore using this licensed network to improve our services. We currently have over 1,300 geostations installed nationwide, and we are excited to see how this partnership can further improve our technology to help bike sharing become a success in Singapore.”
###
Narrowband Internet of Things (NB-IoT)
Only a small fraction of the billions of devices that can get connected are today – too inaccessible, too many, too expensive to be connected through traditional network technologies. To support their specialised needs, the GSMA aligned the industry behind the industrial grade low power wide area NB-IoT technology standard, which has been ratified by the 3GPP. Advantages of NB-IoT technology include low-bandwidth, robust indoor penetration and highly efficient power usage, complemented by the benefits of utilising licensed spectrum such as data integrity, user confidentiality and security. Global operator support for NB-IoT is strong, and with increased adoption and economies of scale, the cost of NB-IoT devices is expected to fall rapidly.
Radio-frequency identification (RFID)
RFID is an asset location technology that utilises radio frequency transmitters to radiate radio frequencies where nearby RFID tags will return corresponding radio frequencies. RFID tags can be read with a high degree of accuracy at a limited distance. These properties are ideal to be deployed to determine if bicycles are properly parked at designated parking spaces. RFID is made to track assets that move through choking points. In the case of bicycle sharing, chokepoints are places such as major transport nodes during peak periods. Therefore, the above qualities make RFID technology the preferred technology over other asset tracking technologies in determining indiscriminately parked bicycles.
About M1
M1 is Singapore’s most vibrant and dynamic communications company, providing mobile and fixed services to over 2 million customers. Since the launch of commercial services in 1997, M1 has achieved many firsts, including the first operator to offer nationwide 4G service, as well as ultra high-speed fixed broadband, fixed voice and other services on the Next Generation Nationwide Broadband Network (NGNBN). With a continual focus on network quality, customer service, value and innovation, M1 links anyone and anything; anytime, anywhere. For more information, visit www.m1.com.sg.
About SG Bike
No deposit, unlock with a paired EZ-Link card, and only pay for what you use! SG Bike is Singapore’s first locally established bike sharing company aimed to curb indiscriminate bicycle parking and promote gracious cycling. As a subsidiary under ISOTeam, SG Bike launched in August 2017 and is the first operator to introduce and utilise Geostation Technology to help manage and control the indiscriminate parking of its fleet of shared bicycles in Singapore. The bicycles need to be parked within the geostation to be officially returned. SG Bike will continue to bring in new technologies for cyclists and Singapore to progress towards a car-lite society. For more information, visit www.sgbike.com.sg.