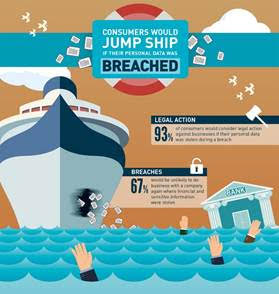 Singapore, November 29, 2017 – A majority (70%) of consumers would stop doing business with a company if it experienced a data breach, according to a survey of more than 10,000 consumers worldwide conducted on behalf of Gemalto, the world leader in digital security. In addition, seven in ten consumers (69%) feel businesses don’t take the security of customer data very seriously.
Despite these concerns, the Gemalto study found that consumers are failing to adequately secure themselves, with over half (56%) still using the same password for multiple online accounts. Even when businesses offer robust security solutions, such as two-factor authentication, two fifths (41%) of consumers admit to not using the technology to secure social media accounts, leaving them vulnerable to data breaches.
This may be because the majority of consumers (62%) believe the business holding their data is mostly responsible for its security. This is resulting in businesses being forced to take additional steps to protect consumers and enforce robust security measures, as well as educate them on the benefits of adopting these. Retailers (61%), banks (59%) and social media sites (58%) were found to have a lot of work to do, with these being sectors that consumers would leave if they suffered a breach.
“Consumers are evidently happy to relinquish the responsibility of protecting their data to a business, but are expecting it to be kept secure without any effort on their part,” says Jason Hart, CTO, Identity and Data Protection at Gemalto. “In the face of upcoming data regulations such as GDPR, it’s now up to businesses to ensure they are forcing security protocols on their customers to keep data secure. It’s no longer enough to offer these solutions as an option. These protocols must be mandatory from the start – otherwise businesses will face not only financial consequences, but also potentially legal action from consumers.”
Despite their behaviour, consumers’ security concerns are high, as two thirds (67%) worry they will be victims of a data breach in the near future. Consequently, consumers now hold businesses accountable – if their data is stolen, the majority (93%) of consumers would take or consider taking legal action against the compromised business.
Consumers Trust Some Industries More Than Others
When it comes to the businesses that consumers trust least, over half (58%) believe that social media sites are one of the biggest threats to their data, with one in five (20%) fearful of travel sites – worryingly, one in ten (9%) think no sites pose a risk to them.
On the other hand, a third (33%) of consumers trust banks the most with their personal data, despite them being frequent targets and victims of data breaches, with industry certified bodies (12%), device manufacturers (11%) and the government (10%) next on the list.
Hart continues, “It’s astonishing that consumers are now putting their own data at risk, by failing to use these measures, despite growing concerns around their security. It’s resulting in an alarming amount of breaches – 80% – being caused by weak or previously stolen credentials. Something has to change soon on both the business and consumer sides or this is only going to get worse.”
Additional Resources
·         Download the full report
·         View the Infographic
·         Visit the landing page
·         Data Protection solutions
About the Survey
10,500 Adult consumers were interviewed by Vanson Bourne globally. Countries included were the US, UK, France, Germany, India, Japan, Australia, Brazil, Benelux, UAE and South Africa. All of those surveyed actively use online/mobile banking, social media accounts or online retail accounts.
About Gemalto
Gemalto (Euronext NL0000400653 GTO) is the global leader in digital security, with 2016 annual revenues of €3.1 billion and customers in over 180 countries. We bring trust to an increasingly connected world.
From secure software to biometrics and encryption, our technologies and services enable businesses and governments to authenticate identities and protect data so they stay safe and enable services in personal devices, connected objects, the cloud and in between.
Gemalto’s solutions are at the heart of modern life, from payment to enterprise security and the internet of things. We authenticate people, transactions and objects, encrypt data and create value for software – enabling our clients to deliver secure digital services for billions of individuals and things.
Our 15,000+ employees operate out of 112 offices, 43 personalization and data centers, and 30 research and software development centers located in 48 countries.
For more information visit www.gemalto.com, or follow @gemalto on Twitter.