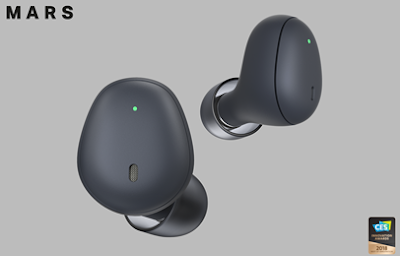 (MARS)
The MARS wireless Bluetooth stereo earbuds were developed jointly by LINE Corporation, owner and operator of the LINE messenger app and social media platform, and NAVER Corporation, Korea’s leading internet company. The in-ear headphones were recognized for a combination of useful new features, including real-time translation, Clova AI integration, and superior noise-blocking to ensure usability even in loud settings.
MARS’s real-time, ear-to-ear translation — powered by NAVER Papago — supports 10 languages, including Korean, English, Japanese, Chinese, Spanish, French, Vietnamese, Thai and Indonesian. Unlike other translation headphones, MARS only requires one set of earbuds. Each person uses one of the earbuds, which are able to connect to each other and offer real-time translations.
MARS also features automatic noise-blocking to reduce ambient noise and ensure clear voice recognition even in disruptive environments. With microphones placed “inside” the earpiece, MARS picks up a user’s voice directly through the ear canal, blocking outside sounds and providing clear phone calls. Even when used at a noisy location, like a rock concert or on a busy street, the user’s voice can be heard cleanly by the earbud microphones.
In addition, MARS integrates and interconnects fully with everyday life thanks to Clova, the artificial intelligence platform that has also been co-developed by LINE and NAVER. With Clova, users can enjoy music streaming, check the weather, and control IoT devices, all using simple voice commands. Built on LINE’s extensive array of big data and digital content, Clova is the only AI platform developed from the ground up for Asian users and languages.
MARS joins a range of AI-related products and services LINE has recently developed, such as the Clova WAVE smart speaker, as well as partnerships with prominent Asian industry players like Toyota, Yamaha, Sony Mobile, LG, Takara Tomy and Family Mart. This commitment to the Clova AI platform is part of LINE’s proactive approach to the evolving consumer landscape, which is being transformed by technological advancements like never before.
MARS is scheduled to be released in early 2018. Clova integration with MARS will be available in Korea first, but is slated to roll out subsequently in other countries.
The CES Innovation Awards
The CES Innovation Awards is an annual competition held by the Consumer Technology Association (CTA) honoring outstanding design and engineering in consumer technology products.
About LINE Corporation
Based in Japan, LINE Corporation (NYSE:LN/TSE:3938) is dedicated to the mission of “Closing the Distance,” bringing together people, information, and society. The LINE messaging app was launched in June 2011 and has since grown into a diversified global platform, operating a range of services and contents.