SINGAPORE, 16 October 2017 – Canon today announced the launch of PowerShot G1 X
Mark III, the newest addition to its range of compact cameras. The first Canon
compact camera equipped with Dual Pixel CMOS AF and an APS-C sized CMOS sensor,
the largest imaging sensor in its compact camera lineup, this latest addition
marks a new technology milestone.
Equipped with DIGIC 7
image processor, the PowerShot G1 X Mark III raises the bar in imaging
technology. Designed with a 24-72mm (35mm film equivalent) f/2.8– f/5.6 IS lens
with 3x optical zoom, the camera is capable of capturing a wide range of
subjects and achieving shallow depth of field. Featuring a vari-angle touch
panel packed in a durable and compact body, the PowerShot G1 X Mark III also
boasts of a high resolution EVF (Electronic View Finder) of 2.36 million dots.
Weighing approximately 399g (CIPA compliant) the PowerShot G1 X Mark III is the
perfect companion for adventure seekers and underwater photographers alike.
“The combination of
an APS-C sized imaging sensor used in DSLR and Dual Pixel CMOS AF premieres for
the first time in the PowerShot G1 X Mark III, to challenge the status quo of
compact cameras,” said Edwin Teoh, Head of Marketing, Singapore Operations,
Canon Singapore. “This sharp shooter is set to empower users with higher image
quality and unprecedented high-speed AF packed in a compact and lightweight
frame, making it an incredibly versatile all-rounded camera to capture your
adventure highlights wherever you go, from travel to underwater photography.”
Redefining Image Quality with Cutting Edge
Technology
The latest DIGIC 7
image processor underpins various enhancements on the PowerShot G1 X Mark III
to deliver on-point performance in speed and image quality. With the built-in
noise reduction technology, users enjoy enriched image clarity with suppressed
noise, even at high ISO speeds, making the PowerShot G1 X Mark III ideal for
outdoor shots or night scenes.
Enhanced with an
improved subject tracking performance, the sharp shooter ensures that fast
actions and movements can be captured with stunning speed and ease. When
tracking a moving subject, the camera is able to detect changes in its size and
orientation, regardless of other subjects in the background. Additionally,
subjects that blend in with the background or have low colour saturation can be
easily identified with the high-precision subject detection feature, even under
low-light conditions.
With Dual Sensing IS,
taking pictures or capturing stable video footages on the move will be a cinch.
An algorithm was developed to minimize blurring and thus achieving image
stabilization with high precision, even with significant camera shake due to
body movements.
The Auto Lighting
Optimiser function corrects dark areas for clearer contrast and high image
clarity in backlit conditions. When shooting with small apertures, the high
processing performance on the DIGIC 7 image processor ensures that diffraction
is suppressed to achieve image clarity.
A new panoramic
feature will delight photographers with the ease of capturing captivating
wide-angle panoramic shots by a simple horizontal or vertical swivel of the
camera. This also allows photographers to have better resolution images; larger
and more detailed prints, along with more cropping ability in post-processing.
Precision
Focus with Dual Pixel CMOS AF
A first in a Canon compact camera, the
PowerShot G1 X Mark III is equipped with the Canon-developed Dual Pixel CMOS
AF, allowing the camera to achieve unparalleled high-speed AF. With an
estimated 24.2 million pixels functioning as phase difference sensors, users
enjoy fast and smooth focus, be it when capturing moments or shooting movies.
Even in dimly-lit conditions, high precision and superior quality are also
achieved.
The PowerShot G1 X Mark III is capable of
attaining continuous shooting speed of 7fps during AF tracking and 9fps during
AF fixed. With its intuitive Touch & Drag AF function, users will be able
to touch and shift the focus points while looking through the electronic
viewfinder, which makes capturing that prized moment much easier. This feature
is especially useful as it enables faster and more precise focusing in various
scenarios, such as capturing images of moving children or animals, or keeping
up with subjects when shooting movies.
Users can challenge their creativity with
PowerShot G1 X Mark III’s movie shooting function, which captures a wide range
of video expressions at a smooth frame rate of 60p in Full HD. Powered by Dual
Pixel CMOS AF and coupled with features like the touch panel, and built-in
stereo microphone, users can shoot movies like a professional. The camera’s
intelligent tracking function ensures sharp footage, even when both the user
and the subject are moving.
Rediscover
Photography with Premium Features
Despite housing a larger sensor and a built-in
Electronic Viewfinder (EVF), the PowerShot G1 X Mark III stays incredibly
compact. In fact, it is approximately 27% (CIPA guideline) lighter compared to
its predecessor – PowerShot G1 X Mark II, with a form factor comparable to the
PowerShot G5 X.
Fitted with a 2.36 million dot OLED screen,
photographers will appreciate a better representation of the image reflected by
the camera sensor. Users can enjoy a high level of clarity right to the edges
of the screen, and at the same time, not worry about interference from glare.
With its vari-angle LCD touch screen, users can experiment with different
angles by flipping the screen horizontally and tilting the screen vertically,
which can come in handy when taking selfies.
With Wi-Fi and NFC connectivity, users can
easily pair the PowerShot G1 X Mark III to their smart devices for ease of
sharing images and videos on their social media platforms. The Canon Camera
Connect app also allows users to have real-time control of camera settings.
Additionally, the built-in Bluetooth low energy technology maintains constant
connection to a compatible smart device at low power consumption. With this
constant connection, users can view images and start remote capture from the
camera even when in Auto Power Off mode. 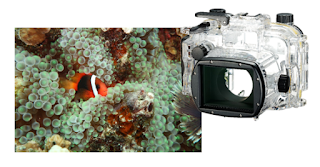 Paired with a compatible Canon underwater
casing (WP-DC56), users are able to capture the intrigue of the underwater
world up to a depth of 40 metres in high clarity. The PowerShot G1 X Mark III
makes an excellent companion on diving trips as it is equipped with a number of
features for underwater photography and movie shooting. Users can correct white
balance using the underwater scene mode, with the effects matching that of a
commercially available colour-compensating filter. They can further fine tune
this balance or even customize their own white balance setting. With underwater
macro shooting available, users can now take up close shots of the fascinating
marine life.
Built for versatile use and durability, the
camera body is dust and drip-proof for adequate protection from moisture and
dust.
Pricing
and Availability
PowerShot G1 X Mark III will be available at all Canon authorised dealers from 27 November 2017 at $1,499.00 (inclusive of GST).